I write this on Dec. 23, 2014, two days before Christmas. Very likely there are many people who are wishing for a white Christmas, sleighing to be enjoyed along with skiing, snowshoeing and hiking in snowy woods.

With great delight I think back to my childhood days and the many hours spent on our now-famous “Flyers,” those sleek, streamlined, steel-runnered sleds. Growing up in the very hilly city of Kewaunee, Wis., we enjoyed “sliding” (as we called it) down several of the most perfect hills which youngsters could imagine. 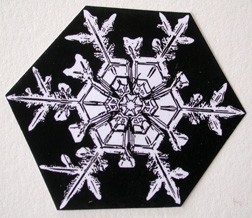 The steepest hills, at least two of them, were barricaded at the top and bottom thereby preventing automobiles and trucks from using them for the duration of the winter. Surely this made for some of the county’s finest sledding, and naturally we youngsters never once realized that.

Sitting in our warm study I now think about the subject of snow and soon realize the great number of so-called “catch-hold” points the topic has.

The first few good snowfalls always meant shoveling people’s sidewalks and earning some spending money, which was especially welcome before Christmas. Never once, as I recall, did I give the slightest thought to the shape and beauty of an individual snow crystal. However we did fold paper in grade school, always into four parts, and cut out four-sided snowflakes.

Later, when I got into teaching, I tried my best to have the students cut six-sided snowflakes. It can be done and it’s an interesting challenge. Try it!

One memorable day when I must have been about 40 years old, still a bachelor, I was sitting in the laundromat in Jacksonport waiting for my clothes to dry. An old magazine that I was reading had a short story about a gentleman from Vermont by the name of Snowflake Bentley, and then and there began my interest in this self-taught and famous man; it’s a fascination that continues to this day.

The following is taken from my Door County Advocate column, “Gone for the Day,” written in early 1969, about 45 years ago. Bear in mind as you read this story that it was written in 1969.

“With the thermometer outside reading about five below zero F. and the wind whipping out of the North, and not whistling ‘Dixie…’ [You might imagine where I was sitting as I wrote this, right next to my old toasty wood range, the “Queen,” feet propped up on the oven door. In this position I feel much more inclined to write about snow this day than if I’d be shoveling it!] 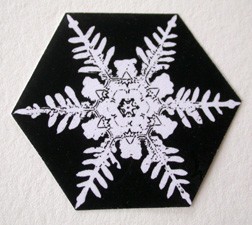 This snow crystal is one of Snowflake Bentley’s original prints.

“It surely wouldn’t be difficult to itemize a wide variety of feelings toward snow, ranging from making snowmen and snow forts, to snowshoeing and skiing – to shoveling and plowing the stuff, or getting one’s car stuck in it, too.

“And to prove how important snow can become to one person, consider the story of Wilson Alwyn Bentley, ‘Snowflake’ Bentley his friends called him. Bentley was a bachelor farmer who lived near Jericho, Vermont, from 1865 to 1931. During that time he managed to become the world’s authority on and expert photographer of snow crystals, or ‘snowflakes’ as most people would call them.

“I guess that all the snow we’ve been getting, and the fact that some young people received microscopes for Christmas, prompted me to tell you something about Snowflake Bentley, for he too received a microscope for Christmas in 1880 as a boy of 15. By luck it happened to be snowing that day and he set about attempting to examine snowflakes with his new present. It wasn’t long before he realized that the slide and microscope had to be cooled to outside air temperature.

“Well, Bentley went on to develop a technique by his 20th birthday of photographing snowflakes through his microscope, then painstakingly cutting out the snowflake patterns, and finally etching the patterns onto glass for re-photographing against a dark background. These photographs came to be used in practically every book written on the subject of meteorology.”

He, himself, wrote his first book, Water Wonders, in 1907. Then, in 1931, with the help of a meteorologist friend, William J. Humphreys, he had published his now-famous book, Snow Crystals (McGraw-Hill). There are several books describing the life of “Snowflake” Bentley and also some of his photographs of water in its various forms, including snowflakes, which are still available for sale. An outstanding children’s book, Snowflake Bentley, was written by Jacqueline Briggs Martin in 1998 and received the highly coveted Caldecott Medal for outstanding children’s books. 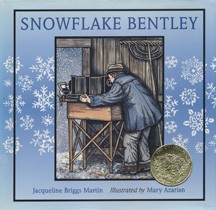 Charlotte and I, through a wonderful series of letters and conversations, got to meet Jacqueline Briggs Martin at a program she was presenting at UW-Madison. We received as a gift a personal copy of Snowflake Bentley, autographed by Ms. Martin on Feb. 4, 2000. It reads: “To Roy and Charlotte, Charter Members in the Wilson Bentley Club, with Best Wishes, Jacqueline Briggs Martin.”

Late in December of 1931, Snowflake came down to his house from the little un-heated shack on the hillside pasture where he photographed. He went to bed with a fever. About two weeks later, the day before Christmas he died, and all that day it snowed.

Now the main point I’m driving at is not snow. It’s the idea of a self-taught man like Snowflake Bentley using his time to good advantage, singling out an interest early in life and pursuing it with great energy as long as he lived. And not becoming rich at it (he actually lost money!), but contributing to society in such a way as to greatly increase our knowledge of snow crystals. As he once said, “I see so much around here to enjoy, right on my own farm. Some folks travel the world and never see a darn thing.”

Could be that a good many of us should use this story as an example – to examine and learn in our own backyards more often!