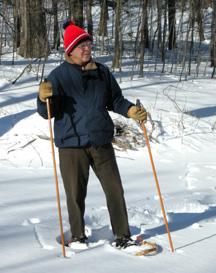 My introduction to the classic ash wood and rawhide laced snowshoes came through an advertisement in a 1955 L.L. Bean catalog. My U.S. Army field artillery days in the Korean War were over, I had signed a contract to teach school in Madison, was ready to return to civilian life and anxious to do some outdoor quiet sports.

Camping, birding, and eventually bird banding occupied much free time until I came here to be the first naturalist at the Ridges Sanctuary in 1964 and began living in the old Rangelight residence in June of 1966. It soon dawned on me that the deep snow that next winter called for getting my first pair of snowshoes, a classic 13” X 48” pair of White Ash and rawhide-laced Michigan model I ordered from the L.L Bean catalog.

I drove home in a roaring blizzard from my teaching job at Gibraltar Junior High that January evening and immediately went to the post office in Baileys Harbor. I practically whooped for joy that my snowshoes had arrived. Within less than a half hour, I had them unpacked, the leather harnesses attached and was on my way southward down the Rangelight Trail at the Ridges. Supper could wait! How impressed I was at the ease of walking with them, even though the snow was already at least a foot or more deep.

I got to Ridges Road, and turned toward the village, walking practically in the middle of the road since there was absolutely no car traffic. I headed south on Highway 57 and, as I passed the Zahn’s home next to the blacksmith shop, there stood my friend, Walter, in the front window admiring the blizzard from the comfort of his warm surroundings. I turned to wave at him and in so doing didn’t bring my foot and snowshoe quite far enough forward. Naturally I stepped with the tail of my leading snowshoe onto the leading edge of my rear snowshoe and, unable to lift the rear snowshoe, tumbled headfirst into the deep snow. I had a good laugh at my first fall and learning lesson on snowshoes, while Walter nearly doubled over laughing! 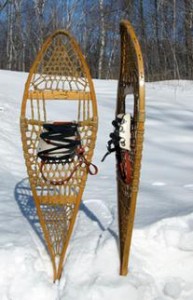 The Lukes’ Michigan model ash and rawhide snowshoes are still in good shape after 43 years of winter use. Photo by Roy Lukes.

Every winter thereafter the snowshoes got a good workout, my very favorite outings being with Emma Toft, snowshoeing out to Toft Point every other day with her to feed the birds and other wildlife. Miss Emma used a short pair of “bear paw” style snowshoes that worked very nicely for her. What exciting and exhilarating outings I often had on weekends snowshoeing back into the “boonies” at the Ridges, exploring some of the inner swales that were quite impassable and also rich with mosquitoes in summer.

The outing I recall most vividly occurred in the afternoon of New Years Day, 1972. I had successfully proposed marriage to Charlotte that morning while watching the Rose Bowl parade in the Rangelight Residence. After lunch we snowshoed, Charlotte for the first time, throughout the Ridges, visiting every one of the hiking trails used each summer. Charlotte took many beautiful pictures (colored slides) during that memorable adventure which we still enjoy.

It was my Door County Advocate story of December 12, 1972, while teaching environmental education for the Gibraltar, Sevastopol and Southern Door Schools, that featured an experience I had while teaching the third graders at Southern Door. I brought my well-used but still like-new snowshoes to show to each of the five classes, discuss, try on several of the students, demonstrate how they are used, talk about their importance down through the ages especially for the winter travel of the Native Americans of our region, etc.

Virtually none of the students had ever seen a real pair of snowshoes, but upon being asked, and much to my dismay, most of them had already been taken for rides on a snowmobile. The thrust of my story centered on how wonderful and fitting it would be if each school system would purchase enough pairs of snowshoes for an entire class and the teachers. What great physical exercise all would receive while at the same time enjoying the quiet beauties of nature in clean crisp air of winter!

What surprised me greatly is that the popular syndicated columnist, Sydney Harris, from Chicago, who also had a vacation home along the bay near Fish Creek, read my story and printed around half of it, agreeing with me entirely, and comparing the relatively inexpensive purchase of snowshoes for a school compared to the hundreds of thousands of dollars for the other organized sports of most school systems. The story appeared in newspapers from coast to coast. One of several copies of that editorial, sent to me by unknown people, was printed in the Lakeland, FL paper! 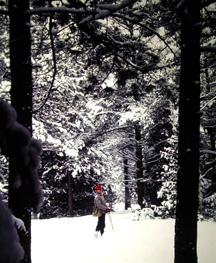 Roy snowshoeing on Deerlick Trail at The Ridges Sanctuary in January 1972. Photo by Charlotte Lukes.

It didn’t take long for the Sevastopol School system, with the great physical education and environmental teaching and urging of, for example, Cassie Cibik and Mike Madden, to purchase enough snowshoes for an entire class. Cross country skiing has also become very popular with the county schools.

One important improvement we made to our snowshoes, still like new and in perfect working order after 42 years of use, was to purchase different bindings that are very secure and extremely fast and easy to get onto and off your feet, especially with cold hands. We bought Iverson “Super A” bindings which are made by the Iverson Co. located at PO Box 95, Shingleton, MI, 49884. Simply Google “Iverson Snowshoes” to see their excellent website or to locate sources of their products for sale. Their snowshoes are of the classic White Ash and either rawhide or neoprene lacings, rather than being made of aluminum and neoprene, as are most snowshoes today, nearly all made overseas.

The Iverson Company offers several different types of both snowshoes and bindings. Their claim is that wood provides as much as twice the flotation of metal shoes of the same weight, are much more efficient especially in deep show, the open lacing doesn’t accumulate snow and ice like the more solid decks of metal, and the wood frames are very rugged and flexible.

Give snowshoeing a try on some of the nice state park trails or even in your own backyard. Either metal or wood frames will give you an excellent workout at a slow pace, just perfect for photographing and enjoying nature at its cleanest and finest.