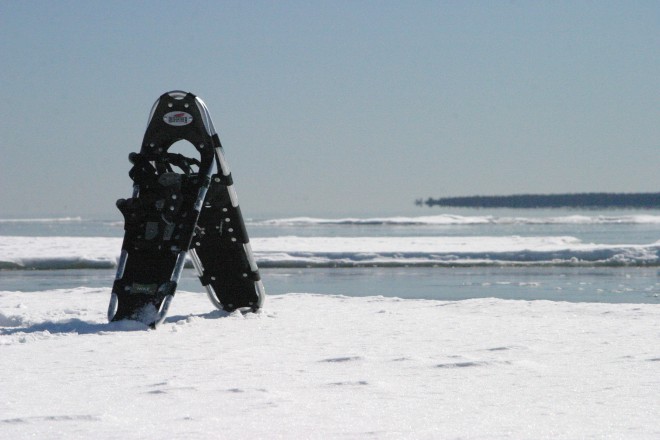 Snowshoeing provides the means for truly discovering those places on both our cognitive and paper maps. For those who love being outdoors and for those who aren’t sure, snowshoeing affords the freedom from groomed ski and snowmobile trails and is a great way to stay in shape through the winter months.

Romantic images of explorers and trappers of varied cultures abound when we think of snowshoeing. Indigenous people and pioneers were able to access the wilderness with their large webbed shoes. In the depth of the winter season, snowshoes will allow you to explore those areas that may be too overgrown for walking in the summer and fall. Although beautiful trails and paths exist in our parks, for this assignment I chose the rivers less traveled. A winter snowshoeing trek on a river can be just as rewarding as canoeing or kayaking in summer and fall. A landscape adorned in snow can provide everything from an exhilarating snow squall to the tranquility of hearing only your breath and steps as your muted sounds soak into the silence of a thick woods.

Snowshoeing rivers isn’t for everyone, but if you cautiously file a float plan with a friend back home or better yet, bring one along, you will discover land and riverscapes few have ever seen.

Before heading out, logical questions should include: “Is the river I am walking safe?” and, of course, “Am I trespassing on private property on my hike?” A river’s safety will vary with the weather. Generally speaking ice will be thicker with several days of below-freezing temperatures, with cold winters giving us the sturdiest walkways. Spring-fed lakes are of concern as the ice is continually aerated and weakened. However, the webbing of a snowshoe aids in displacing the weight of the wearer, giving a greater range on thinner ice.

Before you head up that river, check a local map or plat book for information on the land you are entering. Much of the land that rivers run through is public or owned by non-profit groups that can guide you to places to park and access the river for the most enjoyable trek. Walking up rivers is legal because they are technically public property. According to Christie Rodgers of the Department of Natural Resources, “As long as you are on water or ice, you are not trespassing.” Wisconsin water rights state that any natural lake is state property, even if private property abuts the lake or waterway. Before I headed out, Christie advised me to go with the rule of “keeping your feet wet.” Little did she know that one of my feet would comply entirely. Staying below a high-water mark will keep any trekker from trespassing; yet, if needed, hikers may go around an obstruction with the most minimally intrusive path. This law was put into place for kayakers and canoeists but also protects those seeking a winter trek.

The river or creek needs to be navigable to make it permissible for a hike. This means that at least once a year a small watercraft such as a kayak can navigate the river. It also must have a defined bed and bank and, interestingly, Christie noted that if a river should dry up, a hiker would be trespassing as landowners own the riverbeds.

Come winter the Door peninsula is as blustery as it is inviting. Its bluffs flourish with winter beauty that is not diminished with the season, but rather transformed. The winds and snow that buffet the peninsula continually sculpt and shape the ever-changing landscape weekly, if not daily. Donning a pair of snowshoes provides a break from the commonplace seen from our homes, hotels and car windows. Gone are the gray streets and slushy din from traffic. Stepping onto frozen rivers and park trails provides a glimpse into a stillness in areas of land that remain remote despite the county’s popularity.

I parked my truck on the road and headed toward the creek. At this point near the road the creek was running free with no snow or ice in it. Soon around the next bend, where the slope receded, all became a soft dark ice with a frosty, crunchy layer of snow covered by fresh heavier snow. It was my hope that my oversized snowshoes would displace my weight upon the unknown thickness of Riebold Creek.

Shortly into the trek the remnants of a meal appeared. The hard brown tail of a large rough fish may have been a meal for even more than one beaver. The beaver left a long flat swath through the adjacent woods and back again on the river along its banks. Even with the support of my snowshoes I was envious of the beaver’s agility in such  rugged terrain.

Continuing upriver, the bank that was thick with trees opened in either direction to a frozen marsh. The river split and with it my certainty of the way to Mud Lake, as I was using the headwaters of this creek as my path. I then remembered the forecasted winds of north/northeast, 10-15 knots. The clouds told me the way to Mud Lake. The sky was blanketed by fast moving cumulus clouds from the northeast; their heavy bases were gray with a tinge of blue. A line of conifers met this foreboding sky and, as I grew closer, distinguished themselves as pine, cedar and spruce with birch blending into the softwood forest, peppering it with their black and white starkness. Now the river and its banks were spread out with 75 yards of open land between the frozen stream and the woods. Old decaying trees marked where foliage once thrived – lone sentinels of an unknown species slowly moving back to the earth.

After trekking upstream the ice became dark and so I walked as close to the bank as I could, trying to judge the high-water mark that would be swelling this stream in the upcoming spring. I heard and felt a large crack, hollow and deep. Stepping up lightly, I quickly caught the high-water mark I was imagining. Continuing in this fashion, avoiding the craggy ground, I sought the smooth surface of what I thought would be thicker ice as I moved further upstream where the water’s rush would presumably lighten. Walking the edge again I pushed too far; my snowshoe and boot hit the cold water of the slushy bank, covered with snow.

The next bend revealed a wider separation of tree line as this marshy land opened wider still. Mud Lake was now on the northern horizon. The ice thickened and trekking even on this small lake proportioned my significance in this vast landscape. Heeding the warnings that Mud Lake was spring fed with inconsistent ice thickness, I stood in respect of its danger and took in the world around me. The wind continued to blow; it felt like I could reach out and touch the fast moving clouds that were the day’s ceiling. No human structures were in sight other than an occasional wooden duck blind on my retreat back downriver. My winter day had been fulfilled by yet another experiential answer to the questions I often pose around a crackling fire – what would it be like to walk up that creek…to that lake?