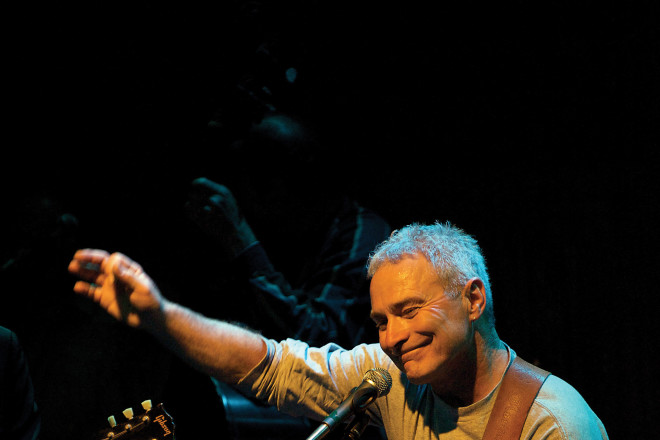 There’s always a good reason to go to Washington Island:  an afternoon at Schoolhouse Beach, a bike ride on the back roads, the ferry ride itself – travelling through Porte des Morts and crossing that magical buffer between real life and island life. But the best reason I’ve had lately is to enjoy breakfast with local resident and Washington Island native, Julian Hagen.

Scheduling an interview with Hagen is no easy task. It involves several mini-conversations in local bars, a series of phone calls and calendar checks and, at last, a date to meet early one morning at the KK Fiske Restaurant, an island breakfast hotspot owned by Hagen’s cousin (or is it second cousin?). The first thing I learn is that, in addition to being the Man Related to Most All of Washington Island, Hagen may also be the Busiest Man in all of Door County. 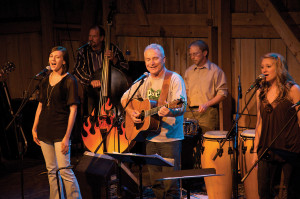 As I walk into the restaurant, Hagen is seated at a corner table with a group of men talking local politics. When he sees me, he rises from his seat and finishes his conversation saying, “So that’s where it stands on that front, anyway,” and turns to greet me. It’s how I imagine many of his mornings start, with a pow-wow of sorts at the KK. Hagen casually introduces me to the lot:  guys he’s worked with, gone to school with, and had coffee with more mornings than he can count…many of whom are related, one way or another, to the Hagen family. He’s known most of these men for 50-plus years. He knows their mothers and fathers, aunts, uncles and cousins. You can almost see the lines of lineage, crisscrossing over the island, back and forth, like balls of unwound yarn. 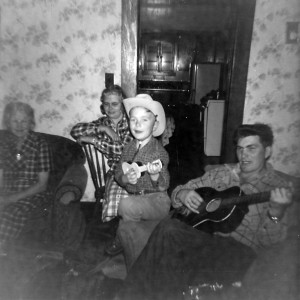 Photo from the Hagen Family archives.

“I’ve owned this Jeep only a few years,” he tells me. “It’s a simple vehicle and easy to work on. If I need a part and I ask around, usually one of my cousins can tell me where to look:  ‘the stone fence on the back 40 of So-and So’s property…I think there’s an old truck with some parts that’ll fit.’ It’s like an informal auto parts store,” he laughs. I find out, in the few short hours of my visit, that islanders rely on one another fiercely and frequently and, in this respect, being related to the majority of the island can come in handy.

We stop at the Red Cup for some coffee and a comfortable spot to chat. Though it’s easy to talk to Hagen, it’s not easy to write about Hagen because, in truth, it’s hard to find an angle. Not because there’s nothing to say, but because there is so much to say. To most, Hagen is known as a self-taught, dynamic musician whose impressive musical career has propelled him into the local spotlight as a solo artist and as a member of The Hagen Family Singers (whom he lovingly refers to as the Von Yap Family Singers – “they just won’t stop talking!”). Hagen has produced numerous albums, some with family, and some with friends. For the past three decades, many of us have watched Hagen play in bars and town parks, on local stages, and in friends’ living rooms. These days you can catch him at venues around the county like Camp David, The Fiddler’s Green, The Red Barn and Third Avenue Playhouse. Just as often, you might stumble into him sitting in for a few sets with a number of local musicians. Both his energy and his schedule are impressive.

But the longer I know him and the more time I spend with him, I’m convinced that Julian Hagen’s real talent goes beyond music, to the very specific, very intangible skill of storytelling. Much like a modern day Arlo Guthrie or Jimmy Buffet, Hagen’s stories have a musical tone to them:  his voice rises and falls, his head tilts back in earnest, he laughs and throws in a self-deprecating aside. He’s a stream-of-consciousness talker, and one funny story leads seamlessly into the next. He’s animated, and engaging, but don’t let the easy discourse and smiling eyes fool you:  under the exterior of a showman lies a genuine man with a strong sense of history, a strong sense of family, and a stron 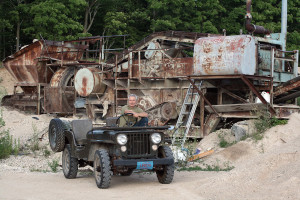 g sense of himself. “He who tells the stories holds the power,” I say, quoting an old proverb. “I sure can tell the stories,” he says, “But ask anybody in these parts…that sure as hell doesn’t mean I hold the power!”

Born in 1956 to Jack and Marcella Hagen, Julian is the youngest of three. He and his sisters, Leila and Linda, grew up in a household of singers, and he learned to play guitar at age 13. At age 16, he wrote “Northern Lights,” his most famous song, a waltz that’s often played at island weddings and funerals.

“My dad knew three chords, but he could play every song. With those three chords, he turned us into a musical family.” Jack Hagen was a great influence (and a character in his own right) on the younger Hagen. “He was a truly self-reliant man,” says Hagen, “one who could fix almost anything, and work from sun up to sun down to care for his family.” In Hagen’s song “How Things Change,” he pays tribute to his father in verse:  My father’s broad shoulders/ Always seemed so strong/ Carried the weight of my world/ As he carried me along/ Now he asks since I’m a man/ What do you think/ And will you lend a hand/ So hey/ Ain’t it funny how things change.

Hagen attributes his work ethic and his willingness to try new things to his father and to the plain old dilemma of making a living in a location and economy that requires creativity and flexibility. His first job, at age five, was driving the family truck (“in crawler gear, so my dad could feed the cows out of the back”). He’s milked cows, grown sunflowers and buckwheat, cleaned fish, raised rabbits, disassembled and reassembled dovetailed l 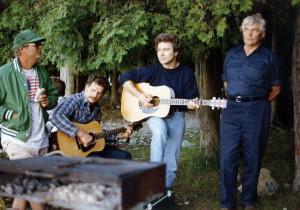 og cabins, owned a real estate company, owned a café, still owns the family gravel quarry, and always, intertwined throughout his work history, is music, music, music. I am impressed by the list. “It’s not impressive,” he says. “It’s the reality of making a living.”

Time’s brought changes to Hagen’s life. Both his mother and father have passed away. His nieces and nephews are grown. He’s gotten married and has two stepdaughters. These days he balances quarry work with home life and music. He has the family homestead on the island as well as a place on the mainland. He was leaving our meeting to attend his great aunt’s funeral, and then off to work on revamping the airport runway, a job that will last most of the summer. He hoped to stop by the Fiddler’s Green that night, maybe hook up with some friends and play a few songs. The coming weekend was the Washington Island Folk Festival, where Hagen and friends will have drawn big crowds. He predicts lots of fun and music, and little sleep.

I ask him what’s on his mind these days.

“Well, I worry about the island, particularly the economics of the island. When things are tough elsewhere, they’re usually doubly tough here. And because we’re all connected – one way or another – what affects one business almost always affects another. We’ve survived a lot, but who knows how long we can protect this rich culture. A lot of people are hurting and there are no easy answer 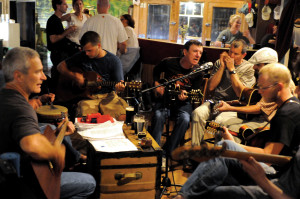 s.” He talks about the shrinking enrollment at the school and the politics of trying to live peaceably amongst one’s neighbors. He worries about the issues facing our country, especially the war and the health care crisis.

“Ultimately, it always comes down to family and friends, and caring for one’s own fragile community. Like everyone else, I worry. But overall, I’m busy and happy and grateful to be someone whose circle of friends and whose world has gotten larger rather than smaller as I get older,” he says. “I am one lucky guy. My friends, my family and my music, that’s what keeps me alive.”

So that’s where it stands on that front, anyway.