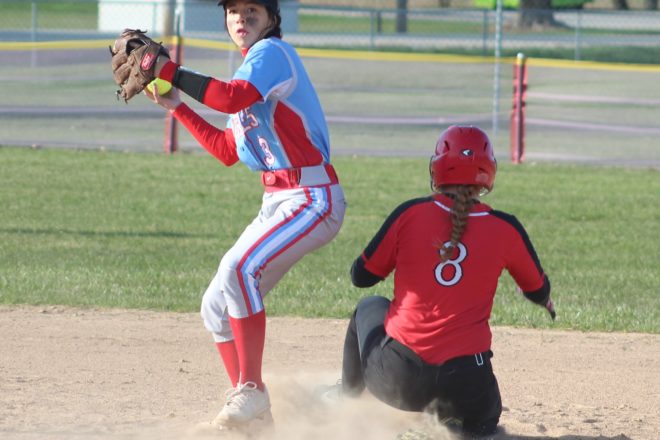 Southern Door’s Callie Miller (3) relays the throw to first base after forcing out Sevastopol’s Samantha Differt (8) at second May 6. Photo by Kevin Boneske.

Wind gusts were aplenty while runs were scarce May 6 when Sevastopol’s softball team hosted Southern Door for a Packerland Conference contest in Institute.

The game was tied at a run apiece in the bottom of the fifth inning when Bailey Rikkola hit a ball to the infield to score Naomi Rikkola in what turned out to be the winning run in the Pioneers’ 2-1 victory over the Eagles.

Naomi Rikkola gave the Pioneers a 1-0 lead in the bottom of the third when she reached home on a wild pitch.

Bella Price accounted for Southern Door’s only run when she scored to tie the game at 1-1 in the top of the fifth.

“She was backed by a great defensive performance on the field behind her,” said Pioneers head coach Brooke Bittorf.

The Eagles’ Ashlyn Delfosse picked up the pitching loss.

Sevastopol improved its conference record to 4-2 – two games behind league-leading Oconto – with the Pioneers’ remaining Packerland games set for May 14 at Algoma and May 16 in the regular-season finale at home against Sturgeon Bay.