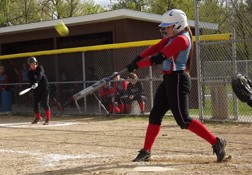 Acacia Tupa hitting a home run that cleared the trees beyond right field and ended up in the West Twin River in Mishicot on May 18. Submitted photo.

• Multiple home runs in a single game – 2 (Tupa hit 2 home runs in two games this season. This was a new record for the school’s softball program.)

Tupa was also very close to breaking the Base on Balls (BB) record, as well as several others. In her four years playing at Southern Door, she’s only had 11 career strikeouts; five came in her last three years playing.