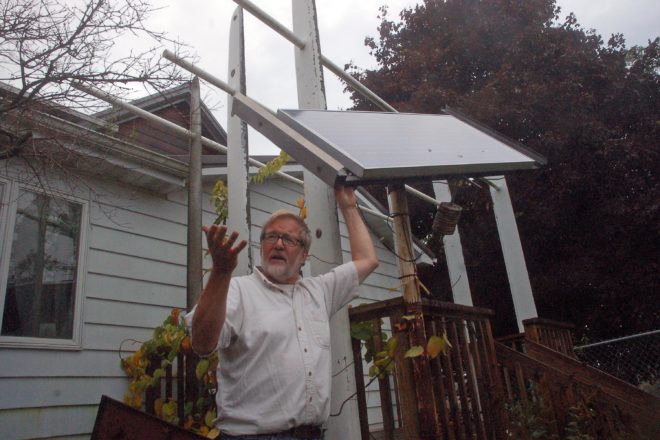 John Hippensteel explains how a tracking solar panel works. This one provides electricity to his daughter’s bedroom. Photos by Jim Lundstrom.

John Hippensteel certainly took note last spring when the Kentucky Coal Mining Museum announced it was switching to solar power to save money.

“When the coal museum in Kentucky puts in a big solar array, they’re not doing that because they love solar. They’re doing that for the economics,” Hippensteel said on Oct. 7 while conducting a tour of his solar- and wind-powered workshop for his business, Lake Michigan Wind and Sun, and his home on County U as part of the Wisconsin Solar Tour.

“Certainly wind is competitive with natural gas, and solar is in some places now, without any subsidies, so it’s happening,” said Hippensteel, who is in his 37th year in the alternative energy industry. “We won’t be able to stop it, no matter what the policy is. The United States can try to go back to coal, but that’s not happening.”

Last year the U.S. solar market had its biggest year to date, with 14,626 megawatts of solar photovoltaic (PV) installed. That is a 95 percent increase above the previous record of 7,493 megawatts installed in 2015, according to the Solar Energy Industries Association (SEIA). 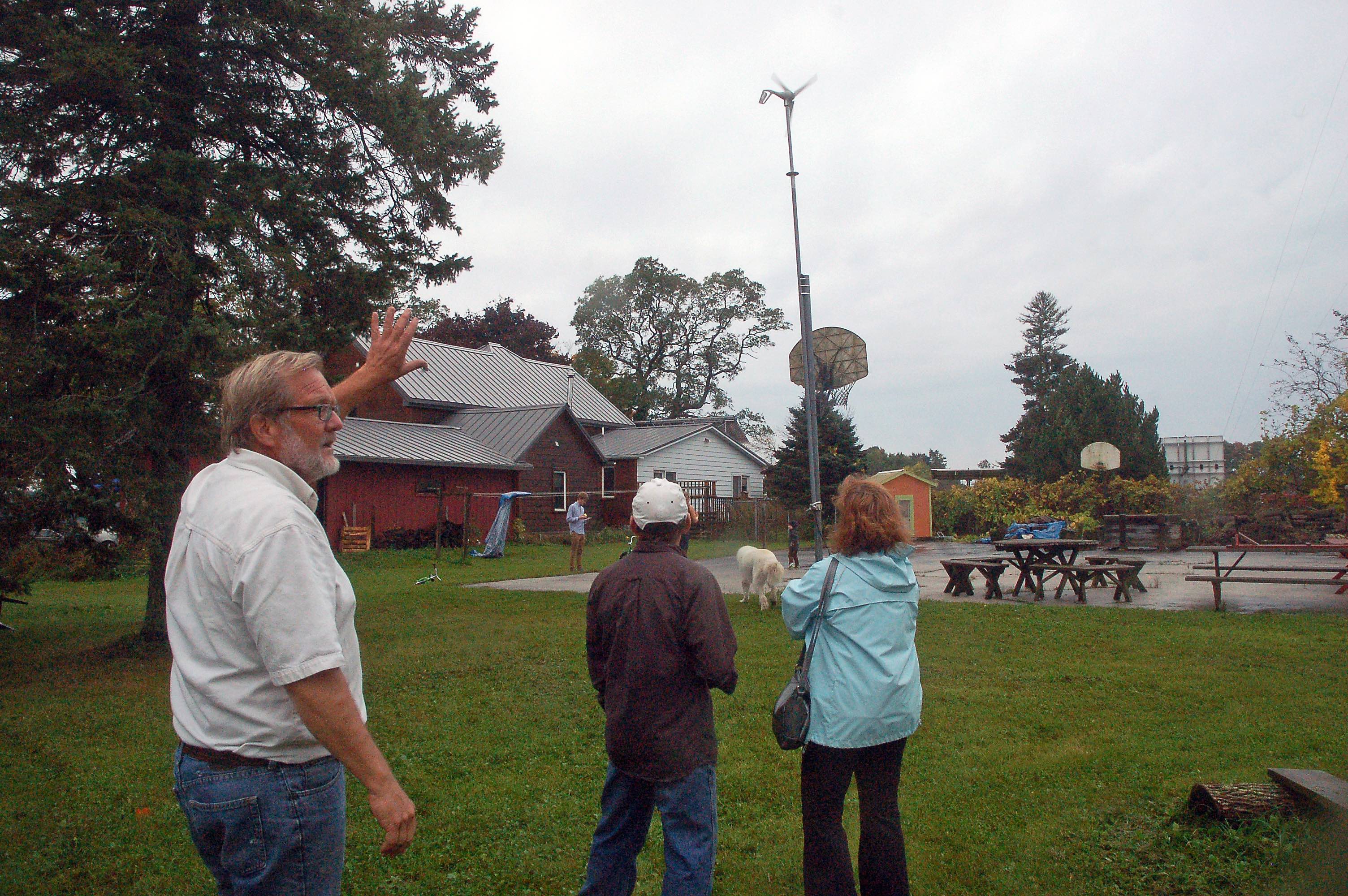 John Hippensteel talks about his smallest wind turbine, attached to a sailboat spar and tethered to a basketball hoop pole. Photos by Jim Lundstrom.

While the growth of the solar industry in 2016 was in all three consumption segments – residential, non-residential and utilities – the highest growth rate was the utility segment, which grew 145 percent from 2015 solar investments.

The SEIA says there are now more than 1.3 million solar PV installations in the U.S. with a capacity of more than 40 gigawatts.

Despite the irony of it being one of the stormiest days of the fall season to date, Hippensteel gave entertaining and informative tours of his workshop and home, which are equipped with solar, solar thermal and wind.

He refers to his workshop as the “laboratory,” and with good reason. He believes in testing products before recommending them to clients.

“We test turbines from all over the world, what works, what doesn’t work,” he said.

In the past, he said, some companies have released products prematurely, only to have them fail spectacularly, and that, Hippensteel said, “just plain hurts. It gives wind a black eye.”

Solar collectors outside the workshop heats water that provides radiant heat through the floor.

“It keeps it about 60 degrees in there, which is perfect for working,” Hippensteel said.

On the south side of his home, Hippensteel points out a bank of evacuated tube solar collectors mounted on the roof for heating the family’s water. He describes them as extremely efficient solar collectors that were designed for a cloudy and cold climate such as ours.

“There are enough tubes to heat water for nine people,” he said. “That’s a bit of overkill, so some of that heat goes into the floor to heat that as well. If you’ve ever experienced in-floor heating, it’s the most comfortable heat there is. And from an energy aspect, every degree you lower your temperature, you save about three percent in energy costs. You can have the room at least five degrees colder just because of radiation heat transfer and you’re in contact with the floor.”

He then moves on to explain a traversing solar collector designed to move with the sun throughout the day. It is mounted next to a pergola he is building out of used wind turbine blades The tracking solar unit provides electricity for his daughter’s bedroom.

He explains that even though tracking solar collectors can produce 20 to 30 percent more energy than fixed collectors, it’s no longer a cost-effective option.

“I’m not a big fan of tracking anymore. You can’t justify the cost,” he said. “It used to be that was cost effective, but now solar panels are so cost effective, it doesn’t pay to have tracking. That’s another machine to maintain. I’m a mechanical engineer, so I want to make these things as simple as possible.”

The next stop is what Hippensteel refers to as “pretty close to Frankenstein’s laboratory,” or the basement of his home.

“It’s a lot more complex than a typical house,” he said. “We’ve got redundant measurements so we can see what these things do.”

On one wall is a bank of inverters that convert the energy from the sun and wind into 240-volt electricity.

Hippensteel points out that even on a cloud-laden, rainy day such as today, “the solar electric is about 10 to 15 percent, but it’s still producing. We’re collecting every BTU that’s out there.”

Bulbous electric meters are also in abundance throughout the basement.

“I’m a fanatic for monitoring electrical loads,” Hippensteel said, pointing out that even the kitchen stove has its own meter.

The next stop is upstairs in the old summer kitchen at the front of the house, where a wood-burning stove with a modified flue pipe dominates the small room.

“This thing is cooking all winter long,” Hippensteel said. “We take that heat and put it in the floors and domestic hot water. We’ve collected up to 20 kw hours a day from heat reclamation from the wood stove.”

Hippensteel said Wisconsin’s Focus on Energy still has incentives for those interested in alternative energy – $2,000 for residential and $4,000 for a business project. But he adds that solar especially has come down so much in price that some people don’t even bother filling out the forms for the Focus on Energy grant.

“They’re much, much cheaper, even without any grants,” he said. “There are very few people who don’t think it’s the way to go now. Even now, you’ll bump into people who say solar’s too expensive. You’ll say, when’s the last time you checked? Twenty years ago. Historically, our clients did it because they wanted to and they had expendable income. Now people are doing it because it’s cost effective. There’s still a 30-percent federal tax credit through 2019, then it’s going to start tapering off. That helps.”