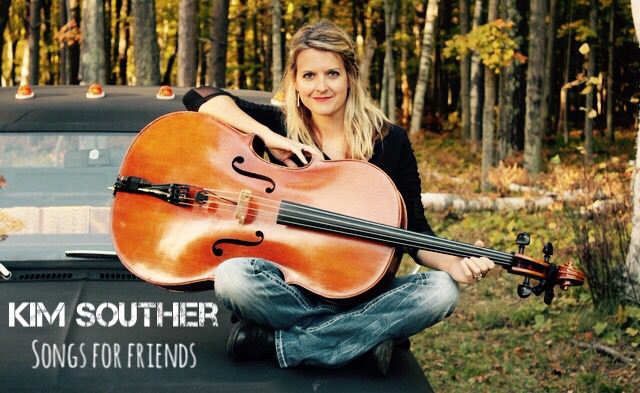 The last time I talked with Sturgeon Bay cellist Kim Souther, in the spring of 2015, things were going just a little fast for the classical cellist-turned-world musician. She was coming off the release of her debut album Missing You and preparing for her attendance at the highly regarded Silkroad Global Musician Workshop with cellists Mike Block and Yo-Yo Ma.

The purpose of the workshop was to create a community of globally minded musicians who could not only learn from one another’s traditions but incorporate those traditions into their own artistic voices.

“They inspired me to keep doing what I was doing and to continue to think outside the box and see how far I could take it,” Souther said.

If the past year-and-a-half is any proof, the sky may not even be the limit for Souther. Since returning from the Silkroad Global Musician Workshop, she has continued to perform, improvise and compose, bringing her genre-bending sound to stages and workshops across the country, starting her own summer music series in Door County, and recording a new album, Songs for Friends, which was released earlier this month.

Souther calls Songs for Friends an “intentional album,” one inspired by an ongoing lesson from the workshop’s founder.

“This one is still a play off of what Yo-Yo Ma is coaching us on through Global which is impacting community with your music,” Souther said. “Not only for yourself and for the pleasure music brings to yourself but trying to help others and create community with it.”

Songs for Friends is tangible evidence of that lesson. Proceeds from the album will support a group of Souther’s friends who are educating children in Southeast Asia and the Congo, particularly with the purchase of books, supplies and funding to keep the school operating. Another portion will benefit a Door County resident who sends blankets to children in Swaziland.

“Each one of these people is doing something amazing for society and it’s my small gesture, my small way of being able to help them,” Souther said.

The five-track album further builds on Souther’s transition from classical musician to global musician. Each track incorporates elements of different genres, from the first – “Hymn,” a funky world tune inspired by a music-sharing session with Iranian and Palestinian musicians at the workshops – to the last, “Congolese Hymn,” a field recording from the school in the Congo that will benefit from album sales.

“It’s a group of men singing about hope and joy and peace, which is quite a statement over there where violence is the norm and you’re never really safe,” Souther explained. “Especially if somebody finds out you’re being educated, sometimes that’s not okay and so people are killed each day honestly for being educated in Congo…we decided to put that on there as the last thing people would hear to kind of remind them what the album is for.”

In between are a bluegrass-Hawaiian ukulele mix, a medley mash-up of favorite hymns that incorporates blues, jazz, country and hard rock, and a slow jazz tune.

Songs for Friends also has a healthy dose of Door County within it, having been produced by local cellist Hans Christian at Studio 330 and featuring local musicians George Sawyn and Gillian Evanoff on a couple of the tracks. While her growing versatility on the cello dominates the album, Souther also flexes her piano and vocal skills on two tracks.

Although the album supports individuals abroad, Souther and her husband, Shannon, plan to use their love of music to support the local community in 2017 with the return of their summer music series, Back Porch Sessions. Last spring, the couple hosted six concerts in their backyard featuring musicians of varying genres, from Brazilian to gypsy jazz to progressive bluegrass. Guests were invited to bring a picnic and enjoy the music and a campfire.

“This year we’re going to take it beyond that. We have a lot of gardening in our front area so we’re going to open that up to the public and if somebody wants a free ticket to the show that night they can come in and they can work in the garden,” Souther said. “Everything from the garden is going to go to the food pantry; we have a couple different organizations we’re working with here in Door County and then also going to the inner city of Milwaukee to a place called City on a Hill where they can’t get fresh produce. We’re really excited.”

In between planning and hosting the community-oriented concerts, Souther will return to the Silkroad Global Musician Workshop and with the inspiration from her growing community of global musicians and mentors, begin working on some new tracks for her next project.

“I’m starting my next full length album that will probably be set to release in about a year,” Souther said. “I’m having fun.”