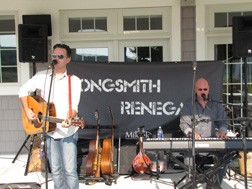 On March 21 at 7:30 pm, the sounds of the Songsmith Renegades will fill Third Avenue Playhouse (TAP) as a joint fundraiser for the United Way of Door County and TAP.

Daniel Anderson and Travis Cooper are the Songsmith Renegades, and they bring to audiences a mix of Americana, rock and country, with a hint of blues and jazz. Anderson and Cooper are also schooled in the great tradition of songwriting. Drawing from their influences and experiences, they meticulously craft music, accepting nothing less than perfection from themselves.

“We are pleased to be working with Third Avenue Playhouse to bring Songsmith Renegades to Sturgeon Bay,” commented Amy Kohnle, United Way Executive Director. “We thank Inge Alverson Bacon, CPA, R.W. Baird & Co. and the Door County Eye Associates for sponsoring this concert. Dan and Travis are extremely talented; we are thrilled that we were able to get a date on this spring’s Wisconsin Tour.”

The Songsmith Renegades will also perform at Brew Coffeehouse in Ellison Bay on March 20 from 11:30 am to 12:30 pm. Later that afternoon, they will perform at Door Peninsula Winery in Carlsville from 3 to 4 pm; a free glass of wine will be offered for those who listen to the band. Also, Glas Coffeehouse will host them on March 21 from 4 to 5 pm. For a sampling of what the Songsmith Renegades offer, visit songsmithrenegades.com.