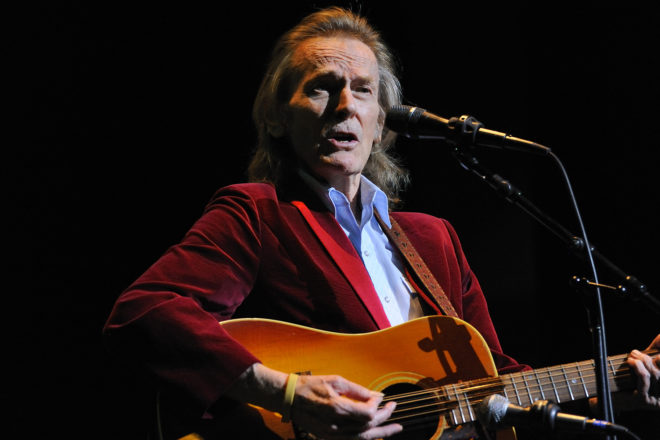 It’s not uncommon for Door Community Auditorium (DCA) to welcome songwriting legends to its stage. What isn’t all that common is when there’s a connection between the musician’s work and the community – in this instance, the ties between Lightfoot’s well-known song “The Wreck of the Edmund Fitzgerald” and the Sturgeon Bay community.

“So certainly that Lightfoot song alone makes it a good fit for Door County and our rich maritime history and roots,” Lewis said.

Lightfoot’s storytelling style lends itself to Door Community Auditorium, whose acoustics are designed for deep listening and attentive audiences, and whose seating – which, while accommodating a crowd – maintains an intimate atmosphere.

If those qualities weren’t enough to qualify Lightfoot for a place in the season’s lineup, “[He’s] a living legend,” Lewis said. “The kind of legend that makes other legendary songwriters like Kris Kristoffersen and Bob Dylan openly express admiration for his craft and songwriting.”

And both of them have commented on the timelessness and staying power of Lightfoot’s music. Kristofferson has said, “Gordon Lightfoot has created some of the most beautiful and lasting music of our time.” And Bob Dylan has agreed, saying, “I can’t think of any Gordon Lightfoot song I don’t like. Every time I hear a song of his, I wish it would last forever.”

Lightfoot will perform on DCA’s main stage Thursday, Sept. 22, 7 pm, during a concert presented in partnership with the Door County Maritime Museum. His performance will showcase more than 50 active years of hit songwriting and international album sales well into the multi-millions. His vast and varied catalog of songs – which, in addition to “The Wreck of the Edmund Fitzgerald,” includes hits such as “Early Morning Rain,” “If You Could Read My Mind,” “Sundown,” “For Lovin’ Me” and “Rainy Day People” – has garnered acclaim from fans and peers alike.

Opening the show will be Jake Wildhorn, a singer-songwriter whose music blends acoustic nuance with contemporary pop energy. From beat-heavy takedowns of internet culture to stripped-back guitar ballads, Wildhorn showcases grit and light riffs in his rich vocals. His first self-titled EP, Jake Wildhorn, and his most recent single, “Sleeping with Fire,” are available for streaming on all platforms.

Gordon Lightfoot’s performance is made possible with support from underwriting sponsors Donald and Carol Kress, presenting sponsors Lori and David Nicholas, major sponsors EH Barker and Margaret and Dale West, as well as the Cordon Family Foundation and the James and Nancy Huebner Charitable Foundation as supporting sponsors.