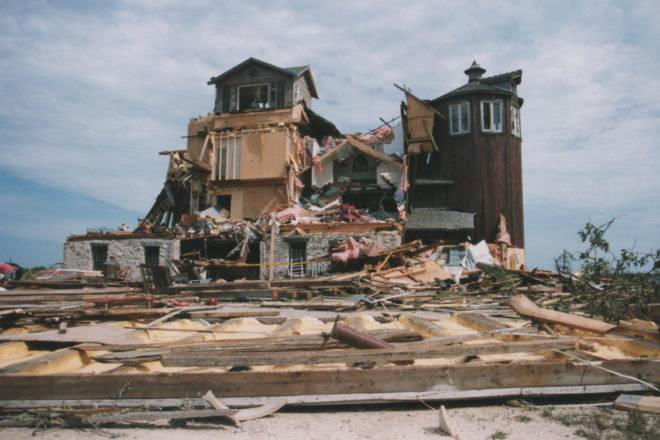 The 1998 tornado in Door County pales in comparison to the hurricane that ravaged Puerto Rico. Photo by Dan Eggert.

Editor’s note:  The following fictional account uses actual recent events in the U.S. Territory of Puerto Rico as inspiration for how Hurricane Maria would have likely affected Door County, had it hit at home. To help imagine the scale, Green Bay to Washington Island is the exact same length as Puerto Rico, but there are 3.5 million Americans living there. Though a translation of events, the following is not a dramatization.

WDOR was the only news outlet in the region to report continuously even as the storm made landfall in Door County on Wednesday, Sept. 20, 2017. TV, online publishers and all other radio stations fell silent. Even today, two weeks later, most news is getting to local Door County residents via sporadic telephone calls from family and friends who have long left the county.

To put this storm in perspective, the F3 tornado that tore through Egg Harbor in 1998 pales in comparison. At half a mile wide with 160 mph winds, that storm was on the ground for 14 minutes and did $7 million worth of damage as it zigzagged through multiple communities. 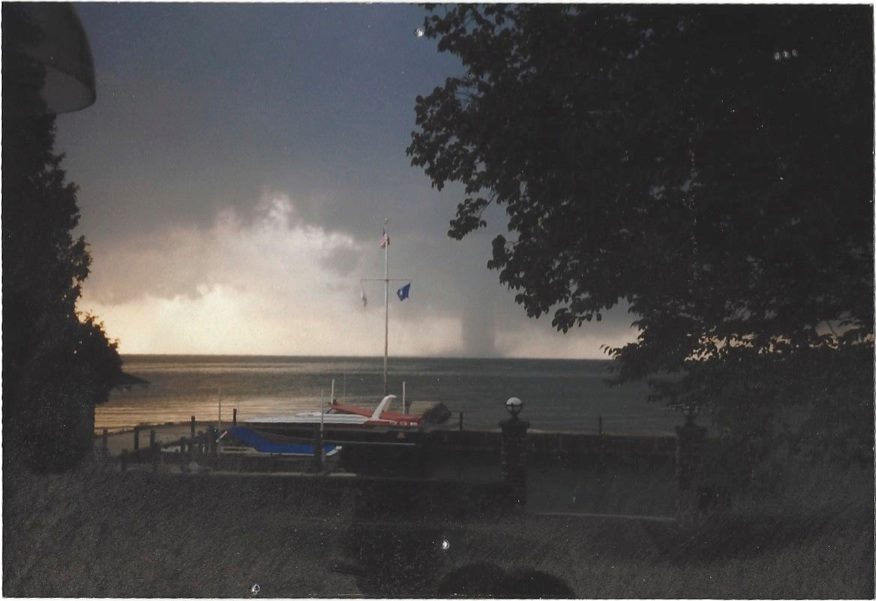 The gale that struck here only two weeks ago had sustained winds of 158 mph and gusts well over 200 mph, but the storm’s center vortex was a full 10 miles wide, with winds only marginally weaker extending another 50 miles, and moved slowly across the peninsula for hours on end. The full extent of damage and the cost cannot yet be calculated. Though Door County suffered the most devastating direct hit, severe weather has left communities without power and vulnerable to flash flooding throughout the entire state of Wisconsin and from places as far flung as Chicago, Minneapolis, Duluth, all of the Upper Peninsula and even rural areas of southern Ontario.

Itemizing the extent of the damage is an exercise in tragic imagination. As relief efforts slowly get underway, Door County’s residents are proud to show their resilient spirit and good humor even in the face of overwhelming destruction, but the strain in neighbors’ voices from Brussels to Ellison Bay show a well of pain underneath.

Currently all three bridges connecting Northern and Southern Door in Sturgeon Bay are indefinitely out of operation, pending repairs by the Army Corps of Engineers, effectively cutting off Northern Door from the mainland. The Bayview Bridge and Maple-Oregon Street Bridge both may have suffered structural damage and are closed as a precautionary measure, while the historic steel Michigan Bridge will need to be razed after the iconic landmark sustained irreparable damage, with major sections ripped off by flying debris. Transportation across the bay is limited to government personnel only via Coast Guard escort.

Cherryland Airport sustained catastrophic damage and only military flights are allowed until further notice. With the exception of the military, a no-fly zone has been declared throughout the entire county.

The entire electric grid of Door County is currently down, as are all cell towers, and it is anticipated to take up to six months to rebuild. Many citizens are relying on generators while power lines lie in flooded streets. Half of the county does not have access to clean drinking water, with many drawing from nearby creeks, which officials fear may be contaminated by floodwaters. Lines for gas and bottled water each last between 8 and 12 hours and there has been at least one murder in relation to gas scarcity. Officials are warning owners of generators to remain vigilant, as there have been instances of generator theft at local businesses and even morgues. 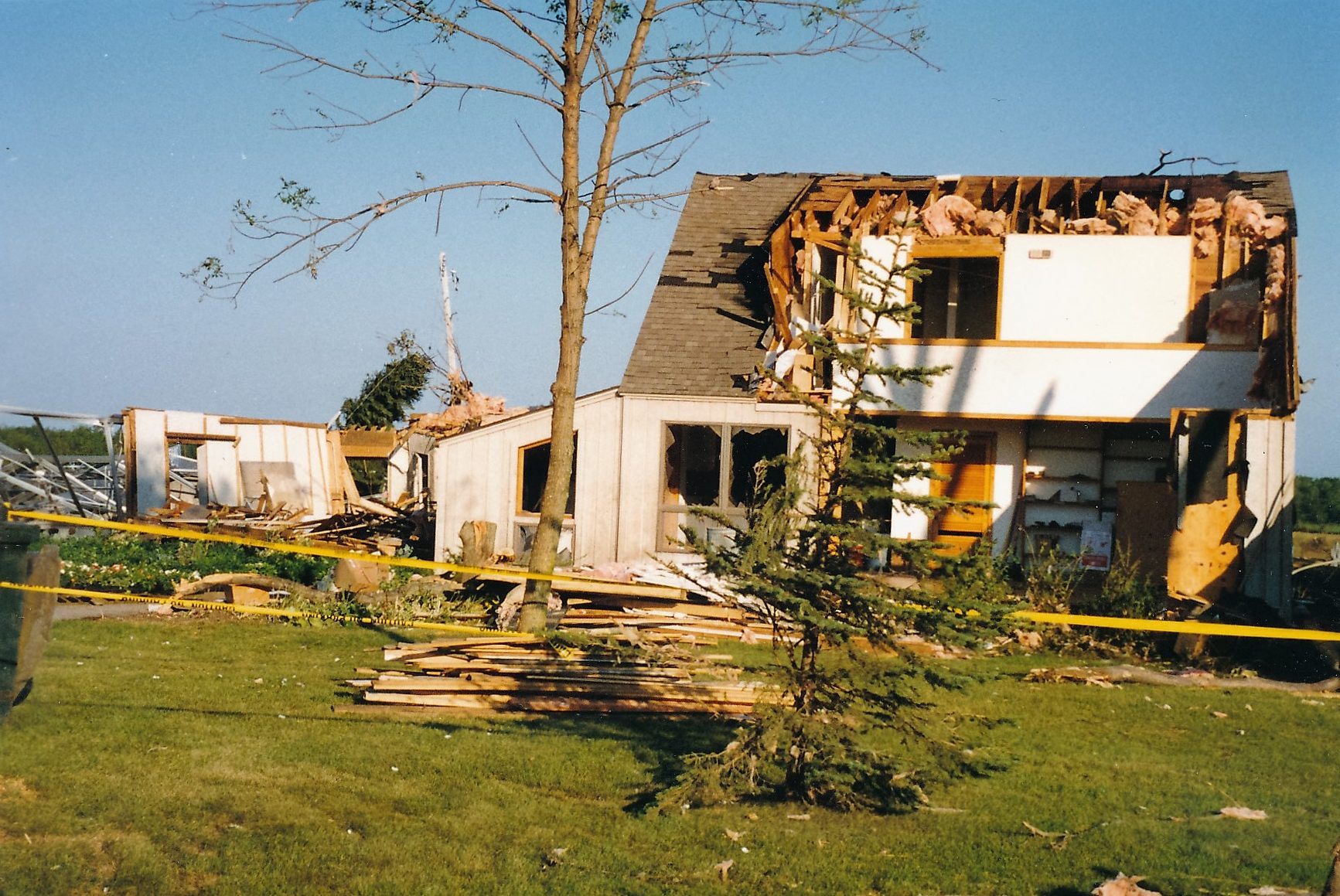 Ninety percent of all wooden structure homes in Door County have been partially destroyed, many without roofs. Brick, cement or stone homes are relatively unharmed. Thunderhill Estates and other mobile home neighborhoods were all total losses.

Though the initial death toll is not as high as feared, officials warn it is likely to rise as communication improves. For example, families from outside the county have not been able to contact elderly loved ones at The Dorchester nursing home in Sturgeon Bay and several deaths have been confirmed due to failing generators. The Door County Medical Center was badly damaged and does not have consistent electricity. Emergency Flight For Life medical transport is taking victims to Green Bay.

Eighty percent of all crops have been completely destroyed, including three-fourths of all cherry trees at Lautenbach’s orchards. Dairy cows and pigs have been spotted floating dead in the flooded ditches and crop fields. Geese, seagulls, ducks and other waterfowl have been silent since the storm. Reports are coming in that no wooden barn structures in the county appear to have survived.

In Kewaunee County, 26 of its 31 wind turbines had their blades stripped from their towers. Each blade is the length of two standard semis.

Door County’s beloved state parks, which draw thousands of tourists every year, have sustained devastating damage, confirms the DNR. The Ridges Sanctuary in Baileys Harbor is covered in several feet of mud and the park naturalist warns the local environmental wonder may never recover. Whitefish Bay Dunes has been nearly entirely washed out to sea, much of the shoreline now nothing but the exposed roots of fallen trees. The tower in Potawatomi State Park collapsed. It is expected to take at least 50 years for these parks to ecologically recover, leaving much of them in mangled ruins.

News from Washington Island is extremely sporadic, as the only reliable communication has been from a single satellite phone that was hand delivered to the town constable by the Coast Guard. Islanders report 48-72 hours worth of food, potable water and diesel remaining, with all back-up generators failed and ferries canceled indefinitely. One of the only videos eerily depicts Schoolhouse Beach with every one of its famous smooth stones gone, washed away, and surrounding cedar trees flattened, the barren shoreline now visible for the first time ever from the road.

Aid is pouring in, however many docks in Sturgeon Bay have been badly damaged, which has delayed arrival. Roads must also be cleared before crucial distribution can begin and many professionally licensed drivers in the county remain stranded in their homes. To complicate matters, a century old obscure law requires all arriving ships to be Wisconsin-built flagships, captained and crewed by Wisconsinites. Though temporarily lifted for 10 days, this drastically complicates the long-term relief effort and will ultimately nearly double the cost of supplies, costs that will be passed on directly to the desperate residents of Door County. These costs have stunted growth in the county for generations already and many economists cite it as a catalyst to the massive private debt incurred and owed to Chicago financiers even before the storm hit. Some of these financiers are now offering additional private loans to cover storm damage in place of government aid, which would more than double the already massive debt.

To add insult to injury in these devastating circumstances, 54 percent of all Americans are not aware that Door County residents are in fact American citizens, let alone that they volunteer disproportionately more in the military, though are not allowed to vote in federal elections, including for president.

Door County relies heavily on tourism and many fear for its economic future. Some favorite attractions have already been confirmed destroyed or irreparably damaged, including much of Third Avenue in Sturgeon Bay, the Sister Bay marina, Anderson Dock in Ephraim, Peninsula School of Art, Peninsula Players Theater, Jacobsen Museum on Washington Island, and countless other landmarks.

Ironically, this comes immediately after a surge in tourism this summer when Door County was featured in a music video for a song that hit #1 in the Billboard Top 100 and was the most streamed song in history at the time the storm hit, with nearly five billion plays.

A 9 pm to 5 am curfew has been in place, but some Door County officials are now calling for martial law as soon as the National Guard arrives, likely sometime next week.

For now, most residents of Door County are relying exclusively on personal networks, one neighbor at a time.

Again, this was a fictional account of what could have happened in Door County had it been struck by Hurricane Maria, but all events described are based on specific events in Puerto Rico.

Logan Woods is a 2005 Sturgeon Bay graduate whose wife was born and raised in San Juan, Puerto Rico. Both studied at UW-Madison, as did both her parents, along with many other Puerto Ricans. If you would like to help the 3.5 million Americans in Puerto Rico, please contact your representatives and consider a donation to the Red Cross. Clothes are not needed. If you would like to volunteer, contact Logan Woods at [email protected]. Missions are being organized for an appropriate time in the future.