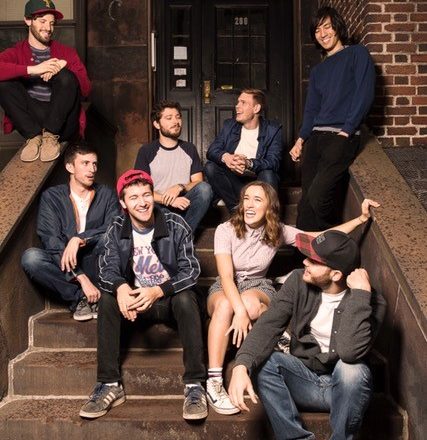 As NPR writes, “Siblings Clyde and Gracie Lawrence are not your typical pair.” Clyde Lawrence, 24, and Gracie Lawrence, 21, have been writing songs and listening to countless Stevie Wonder, Randy Newman and Aretha Franklin records together in the living room of their family’s New York City apartment since they were little kids. After years of playing together, they officially created Lawrence, an eight-piece soul-pop band comprised of powerhouse musicians who happen to be their best friends from childhood and college.

Following their debut LP Breakfast (2016), which reached #6 on the iTunes R&B/Soul charts, and received attention and praise from a variety of sources ranging from NPR’s “All Things Considered” to Stephen Curry’s social media, Lawrence released their sophomore album, titled Living Room, on Sept. 14, 2018. The album ranges from R&B/funk feel-good pop songs to soulful and cinematic ballads. Living Room chronicles the life of two kids growing up into (almost) fully formed human beings and the trials and tribulations along the way, including break-ups, make-ups, a family loss, and the attempt to find harmony between excitement, anxiety, melancholy, and empowerment.  Sonically, the album combines elements of Lawrence’s old and new influences by mixing live with electronic, analog with digital and meticulousness with spontaneity.

Lawrence has sold out headline shows across the country and appeared at multiple festivals including Bonnaroo, Outside Lands, Firefly, Okeechobee, Hangout and more. In addition, Lawrence has opened for notable acts such as Lake Street Dive, Vulfpeck, Soulive, Jon Bellion, Jacob Collier, Blues Traveler, O.A.R. and others.

In addition to the band, Clyde and Gracie Lawrence work in other artistic fields. Clyde has composed songs and score for films such as Miss Congeniality (2000), Music and Lyrics (2007), The Rewrite (2015), Landline (2017) and an upcoming Disney film Noelle (2019). At age six, Clyde was admitted as the youngest member to the Songwriters Guild of America. Gracie Lawrence, in addition to singing and writing music for Lawrence, is an accomplished actress. Gracie can be seen as a series regular in the role “Julie Gardner” in the upcoming CBS All-Access murder mystery, $1 alongside Carroll Lynch, Leslie Odom, Jr., and Sturgill Simpson. She has also been appeared on Broadway, in films and in television shows such as The Good Wife, The Americans and Younger.

Doors open at 6 pm for this free show in connection with Baileys Harbor’s AutumnFest, with special guest Victoria Canal. More information is available at DoorCountyMusicHall.com.