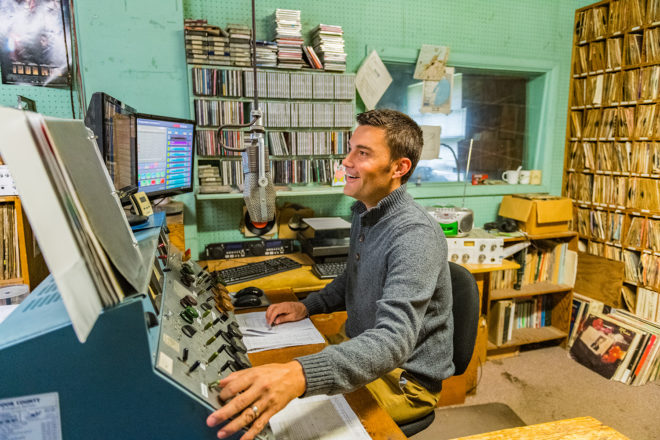 Danny Allen at WDOR chooses songs on the fly during live hours. Photo by Len Villano.

My first stop was at the Ephraim office of The Lodge 106.9, which, along with Rewind 97.7 in Sturgeon Bay, is part of the Door County Radio Group.

I was surprised to see how streamlined the station’s broadcasting studios were. I was expecting to see stacks of CDs, memorabilia, cases full of old records and a vast array of buttons and mics. The posters and memorabilia were certainly there, but the rest of the space was spare: a couple of mics, a computer and a soundboard in each of the two studios. Welcome to the digital age.

The music you hear on this local station is played from a large hard drive whose collection of songs has grown throughout a number of years, and it continues to grow in a variety of ways. People are able to share music files easily through email and links, and there are websites tailored to radio broadcasters — what owner Mike Mesic calls a radio hub.

The station’s hard drive has about 3,000 songs in its library, but that doesn’t compare to the thousands of new songs it plays. Mesic said the station has 25 to 30 new songs in its rotation at any given time. That way, The Lodge is always rounding out its musical mix with old and new tunes.

So how do the radio hosts choose which songs to play?

Some might think that it’s all about the tastes and preferences of the host, but that’s not the case. Mesic said song choice is about catering to the listeners and describes The Lodge’s mix as being “tailored for the Door County lifestyle, with a wide range of artists.” He wants listeners to feel as though they’re in Door County, no matter where they actually are.

He imagines how the music the station broadcasts would sound if it were playing in Door County staple spots such as Lautenbach’s tasting room or a Wild Tomato location, he said. Paired with the Lodge Activity Board — a list of events happening in the community — the station has a very local feel.

“I want it to play into the feeling for the visitors or the locals who are out and about, and I want it to be the soundtrack of sorts,” Mesic said.

The Lodge uses a program with coding that balances genres, genders, tempos, times — you name it — to help the hosts schedule their music rotation ahead of time. They also have categories of music for each of the seasons.

“Within every 15 minutes of listening, you’re going to get something from each piece,” Mesic said of the coding program. “You’ll get a pretty good snapshot of what the radio station is about.”

Mesic still spends a lot of time going through The Lodge’s schedules manually to make sure they reflect the station’s signature sound.

To play the music, the station must pay four license fees every month, plus additional fees to stream the same content online. It must also pay the Federal Communications Commission a $1,000 regulatory fee annually.

WDOR’s station in Sturgeon Bay is filled wall to wall with records, CDs and old broadcasting equipment. You get a feel that the place is dated, but it’s also very cool.

Its radio hosts don’t schedule music ahead of time, which is rare in the radio game, said Danny Allen, son of owner Eddy Allen. There’s no formula to help the hosts, but they can personalize their choices a bit more, still aiming to cover a wide variety of genres and eras.

“We can play whatever we want,” Allen said, but these genres do not include rap, heavy rock or punk. That choice has nothing to do with licensing or laws; instead, it has more to do with audience preference — Allen said the station’s demographic leans a little older.

WDOR uses a program to “drag and drop” blocks that contain song and commercial files during the hours when it’s live. When I visited the studio, Allen had a few songs queued up so we could chat, but he needed to stop the conversation at times to give a weather update or add transitions. It’s like a timing puzzle.

“We’re very loosely formatted,” Allen said. “The goal is that it takes on the personality of the person playing the music. The DJ on air is picking songs as they’re playing.”

Allen is often inspired by recent performances he’s seen. For example, he went to Farm Aid this year and projected he’d play more music from the artists featured at the festival.

“Our philosophy is that we want to play and put things on the air that you can listen to with your seven-year-old in the car,” said sales manager Bryan Mazur. “That’s kind of the mindset when we’re selecting music. We try everything possible — with music, with content, with everything — to make it clean and family-friendly across the board.”

For each of the five stations, the company works with consultants who help choose songs that are popular within that genre. They take some creative license, but not much, Mazur said. Like WDOR, that means no rap or hip-hop for the Nicolet Broadcasting stations.

In this case, though, it comes down to licensing. Mazur said the company must declare which licensing it wants for each station. In the same way that talk shows don’t play music, a station that’s licensed for country doesn’t play rap.

However they arrive at their distinctive music mixes, these stations strive to capture Door County’s vibe and spirit through accepting song requests, playing the music of local artists when they can, making the most of genres and connecting to listeners and businesses by sharing news of the county’s many events. Each in their own way, they provide a soundtrack of the peninsula.