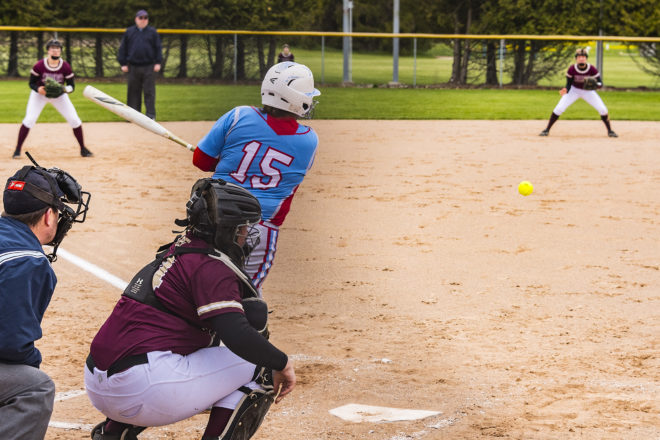 The Southern Door softball team advanced to its Division 3 sectional final with a 6-0 win over Kewaunee Tuesday.

The 20-3 Eagles play Packerland Conference foe Oconto Thursday at 5:30 pm in Chilton. The Eagles split with Algoma during the regular season, losing the season opener 1-0 and winning the second game 6-5 on Apr. 25.

“To have four Packerland teams win regional titles and then to have three out of the four final teams in Division 3 is really outstanding,” Southern Door coach Courtney Renard said. “Playing a conference team in the postseason had its advantages and disadvantages. You really get to know player tendencies and practice and play to those. I think it makes our team especially work twice as hard. We want to continue to show how we play ball.”

Tehya Bertrand continued her strong hitting in the postseason with two hits, including a 2-run home run. Lexi Wery and Nicole Norton each had a pair of hits.

“Tehya has been seeing the ball very well lately,” Renard said. “It’s her senior year and she is really making the most of it.”

Wery pitched a complete-game, 3-hit shutout and struck out five.

“She was hitting her spots well today,” Renard said,  “and her change up worked too.”