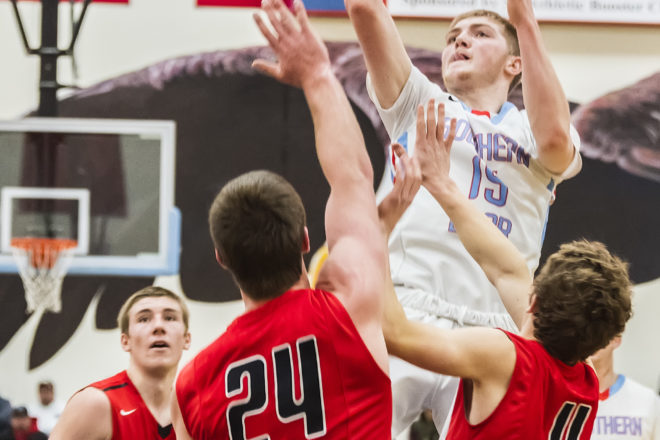 Despite a disappointing 58-52 loss to Valders in a Division 3 boys basketball regional final Saturday, Southern Door’s Derik LeCaptain chose to reflect on his team’s total high school basketball experience rather than the outcome of just one game.

It was the fourth straight season Valders ended Southern Door’s season in the playoffs, but it was the first time the Vikings defeated the Eagles on the road, a fact that wasn’t lost on head coach Trevor Schwoerer.

“To come up in a more hostile environment and to knock off a talented and experienced team like Southern Door was definitely gratifying,” Schwoerer said.

Early in the second half it looked as if Southern Door might be able to solve Valders and move on to the sectional semifinals for the second consecutive season. LeCaptain scored on two rebound baskets to put the Eagles up 37-29 three minutes into the second half and grab the momentum.

The Vikings responded with a 13-4 run to take their first lead of the game at 42-41 with 8 minutes, 44 seconds remaining. Reese Brown and Matt Myers fueled the run with a three pointer each, and Trevor Leist added four free throws.

The Vikings and Eagles swapped leads four more times until a free throw by Fletcher Dallas gave the Vikings the lead for good at 48-47 with 3:09 remaining. After LeCaptain hit a free throw to bring the Eagles within one possession at 52-49 with 44 seconds left, Dallas hit two free throws and Leist added one to stretch the Vikings lead to 55-49.

The Eagles hit their first six shots of the game, including five three pointers to build a 17-7 lead and force a Valders time out with 13:16 left in the opening half. Once again the Vikings chipped away at the Eagles’ lead and a late three pointer by Nate Griepentrog cut the deficit to 33-29 at the break.

“I thought our guys held their composure during those runs, especially the run when they hit their first five threes,” Schwoerer said. “It was really good mental toughness from our boys.”

Daoust came into the game needing 28 points to catch former Southern Door standout Nathan Vogel and become Door County’s all-time scoring leader, but fell just shy, finishing with 23 points on the night and 1,562 for his career.

Daoust scored 51 points against Algoma on Feb. 18 to break the Door County record of 50 held by former teammate Nick LeCaptain. After scoring just 61 points as a reserve on a veteran team his freshman year, Daoust score 1,501 points his final three seasons, including 567 this season,

“At the end of the day, records aren’t what matters,” Daoust said. “It’s the bonds that matter, and I had so many of them.”

Hawkey said it will be difficult to to replace four seniors who finish out outstanding careers. The Eagles won their fifth consecutive Packerland Conference title and had a 40-game conference winning streak up until the last game of the season.

“Derik, Kyle, Max (Pierre) and Joey (Delveaux) are a special group of kids and knowing I’m not going to be able to coach them anymore kills me,” said Hawkey, who ironically ended his career at Southern Door with a loss to Valders in 2008. “Those four seniors are arguably the best group of athletes to come out of a Southern Door class ever.”