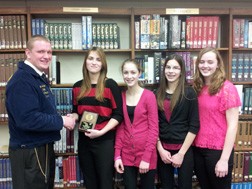 Both the quiz bowl team and the parliamentary procedure team qualified for the sectional level. The Section 9 FFA speaking contests will be held March 26 at Reedsville High School.