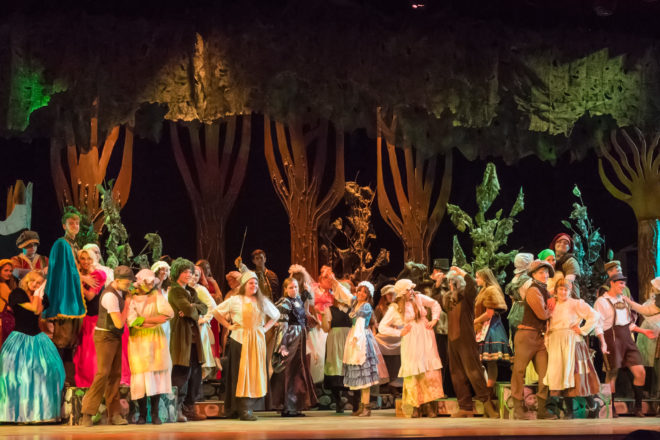 Fifty-two Southern Door students star in this weekend’s production of ‘Into the Woods.’ Photo by Len Villano.

Southern Door High School dramatists are taking a cue from the dark and cold months of autumn with their fall musical, Into the Woods, a foray into the less-than-fairytale world of folklore legends the Brothers Grimm.

The Brothers Grimm are Jacob and Wilhelm, 19th century German authors who collected and published such tales as Cinderella, Hansel and Gretel, and Rapunzel, among many others. Their work is best known through Disney adaptations, though these adaptations sanitize the signature aspect of original Grimm tales: cruel and violent situations.

For example, in the Grimm take on Cinderella, when the evil stepmother tells her daughters to fit into the tiny slipper left at the ball by Cinderella, the daughters cut off bits of their feet (one a big toe, the other part of her heel) to do so.

The Grimms didn’t set out to terrify young children. Their stories were not originally intended for young audiences, but as a scholarly project to collect and preserve German folk stories. In their lifetimes, they gathered, wrote, modified and published more than 200 of them. 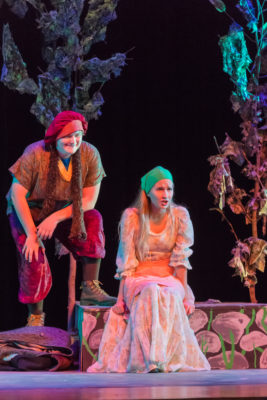 A cast of fairytale characters learns lessons on their various quests for “happily ever after.” Photo by Len Villano.

The characters from at least four of these – Little Red Riding Hood, Jack and the Beanstalk, Rapunzel, and Cinderella – appear in Into the Woods, a musical featuring music and lyrics by Stephen Sondheim and a book by James Lapine. It weaves the plots of Brothers Grimm and Charles Perrault tales into a storyline that follows beloved characters on their often selfish quests for “happily ever after.”

What brings these collection of characters together is the story of the childless baker and his wife, who want a child but have been cursed with infertility by the witch next door. Their journey to get the curse lifted finds them interacting with the likes of Cinderella, Little Red Riding Hood and Rapunzel, among others.

Fifty-two Southern Door students will star in the production this weekend, under the direction of musical director Bonnie Weydt and drama director Catrina Foster-Pakalske.

“In the second act things go a little dark but at the end everything’s wrapped up and there are lessons to be learned,” she added. “Besides that, it is quite a funny show.”

The production will play out against a set designed by art teacher George Ouimette and to the tune of a pit orchestra directed by Naomi Files.

The musical originally debuted in 1986 and premiered on Broadway a year later. It won Tony Awards for Best Score and Best Book, and has since been the subject of a national tour, and Broadway and London revivals. In 2014, a Disney film adaptation was released starring Meryl Streep, James Corden and Johnny Depp, and was nominated for both the Academy Awards and Golden Globes.