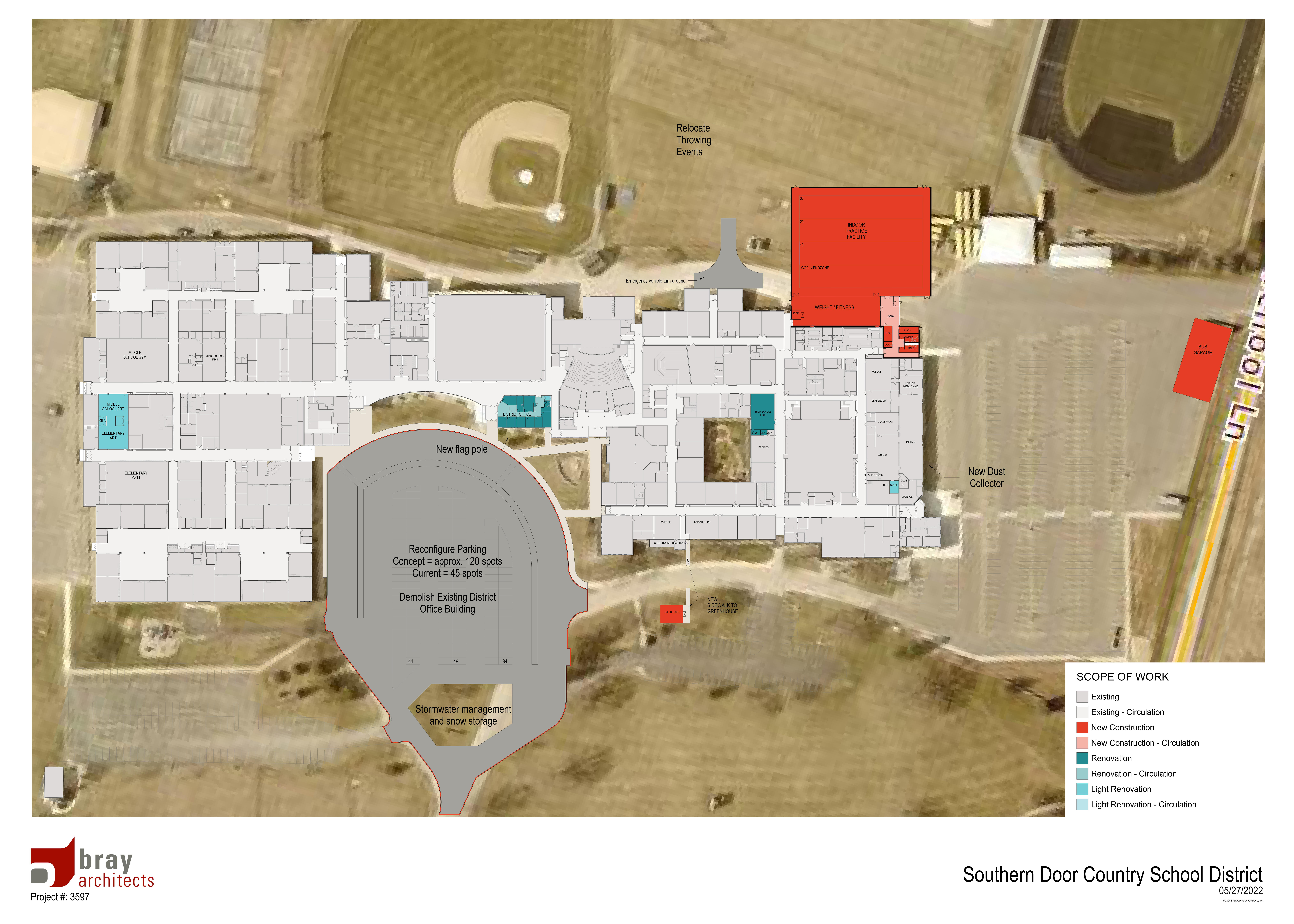 District leaders discuss how Southern Door can afford the two referendums that will be on the Nov. 8 ballot

The Southern Door School District will ask voters in the Nov. 8 election for $14.9 million to fund major improvements to school facilities, and to exceed revenue limits by $975,000 per year for three years for operational expenses, beginning with the 2023-24 school year.

If both referendum questions pass, voters would authorize the district to spend $17,825,000 over the three years.

District voters last authorized the district to exceed revenue limits for operational costs in 2020 for $975,000 per year for each of three years beginning that year. The last capital referendum voters authorized was in 2018, for $6.27 million to finance improved security and create elementary classrooms that eliminated the outdated commons-style elementary-education areas.

Superintendent Chris Peterson said the district has paid down enough on the previous debt to ask voters to re-up a three-year infusion for school operations and to fund facilities improvements – “and the levy would not go up.”

The mill rate for property taxes for operations and facilities improvement would continue to be the same for the next school year as the current year, which is also the final year of the previous $975,000 operational referendum.

Southern Door School District business manager Jason Melotte said the district had more taxable property “value per member” than anticipated the past two years. That enabled the district to pay down an extra $1,576,300 on its debt from the 2018 capital referendum. He said the goal is to pay down a similar amount during this fiscal year to erase even more of that debt.

Peterson and Melotte noted that if local residents have property that increases in value, they most likely would see an increase on their tax bills next year. But the tax rate used to determine the district’s portion of a property-tax bill, or “what the school controls,” Melotte said, would not go up.

“If your property value changes, your actual payment will go up, but it won’t be from your total levy,” Peterson said.

The district’s current mill rate is $8.71, the same rate projected if voters approve both referendum requests.

The additional $975,000 for each year over the next three years would pay for “student support services, including mental health, updating curriculum materials, maintaining technology equipment, maintaining programs and services, and using for wages and benefits to attract and retain teachers and staff,” according to the official language on the referendum question voters will see in November.

Peterson and Melotte said they hoped the district could stop asking for operational funding help three years from now.

Ultimately, Peterson envisions Southern Door becoming more of a “destination district,” with its quality education and the proposed facilities improvements. Through open enrollment, the district already receives students from the Algoma, Luxemburg and Sturgeon Bay districts. In addition, some families that move out of the district continue sending their children to Southern Door.

“We hope people will want to open-enroll here or move here,” Peterson said. “Our goal is to attract and retain as many students as we can.”

He said if voters approve the capital referendum, the district facilities should be “all set” for a while.

“All of our research indicates these improvements will carry us for quite some time,” he said.

Rundown of the Capital-improvement Projects

The district gathered stakeholder input prior to shaping the proposed projects, which include renovations to the elementary and middle school art rooms; improvements to the technical education, family and consumer education, and agriculture education areas; construction of an indoor multipurpose facility and expansion of the weight/fitness area; construction of a bus garage; and expansion of parking by relocating the district office.

The new bus garage would help preserve the district-owned fleet, as mechanics often work on buses outside currently, Peterson said. The multipurpose indoor athletic facility and fitness center could be used for school activities, early-spring baseball and softball practices, and student and community-member workouts.

The existing Eagle Fitness Center occupies a room at the front and center of the school and has the security features and entrances that make that space ideal for the district offices, Peterson said. The existing district offices occupy a house on a lawn in front of the school’s front parking lot. During school events, cars are parked all over the campus, overflowing onto the grass. Peterson said the project would increase parking in front of the school from about 60 spaces to approximately 140.

District officials took into account current materials costs and rising interest rates when they assembled their list for the $14.9 million capital referendum, Peterson said. If costs of building materials decrease somewhat or interest rates don’t go up by as much as the board predicts by the end of the year, the capital-improvement project could include more improvements on the board’s wish list.

Peterson said voters may contact him for more information at 920.825.7311 or [email protected], or visit the Facilities Planning section of the school’s website.