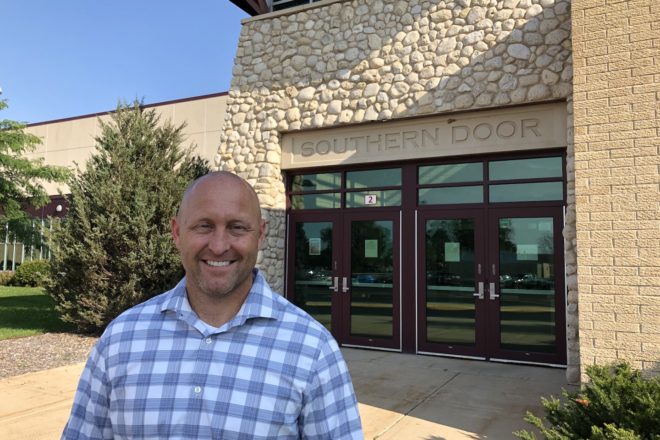 New Southern Door Schools Superintendent Chris Peterson has been impressed by the facilities in Brussels and the staff members he’s getting to know. Photo by Craig Sterrett.

Chris Peterson has eased into the superintendent post in the Southern Door School District following the retirement of Patti Vickman, its former leader.

“Patti Vickman did an outstanding job of getting the district to a great place,” Peterson said. “I came in, and the other administrators were incredibly welcoming, and it’s been a very smooth transition. Patti had everything well organized. I don’t think we’ve missed a beat since I came here.”

Other than difficulties finding a place to live in the Door County real-estate market, Peterson said he couldn’t have asked for a less stressful switch after 12 years as the superintendent of the Howard Grove School District, northwest of Sheboygan.

He learned about school districts throughout northeast Wisconsin as a member of Cooperative Educational Service Agency 7 (CESA 7). And, through his service as the current chair of the CESA 7 superintendents’ committee, he learned a lot about the work Vickman was doing at Southern Door.

“That kind of aided my transition here; I knew this was a good district,” he said. “Coming in and not being a complete stranger has really helped.”

Southern Door appeals to Peterson. He and his wife, Jada, enjoy all that Door County has to offer, but he’s also familiar with rural, agriculture-rich school districts such as Southern Door. One of his first visits to the school this spring coincided with Drive Your Tractor to School Day, and it was not the first of those that he’d experienced.

“The ag department is really well developed here,” he said. “I think the connection between the school and the farming community is really significant. A lot of students can thrive in that environment.”

Peterson has been impressed by farm-to-school programs at Southern Door, where students grow various crops and have hydroponic towers to grow lettuce for the school’s food service. He’s also impressed that some students have raised livestock to sell to the district.

“School really is the center of the community,” he said. “If there’s a big event going on, more than likely it’s connected to the school.”

The school functions as such a hub of the community that its weight room serves as a fitness center that’s available to the public with certain restrictions, access rules and costs. The center reopened to the public in late July after a lengthy COVID-19-precaution closing.

Ever-changing rules and needs related to the pandemic will not be new to Peterson.

“It was incredibly tough,” he said regarding what school leaders dealt with during 2020-21. “There was so much variance. The neighboring district might be completely shut down, and a neighboring district is still open. Or, you’re running in a hybrid model, and they’re not. It became one of those things where people would say, ‘So-and-so is doing this; why aren’t you doing that?’

Peterson has several reasons for optimism about 2021-22. Secondary-school students and all staff members had opportunities to get vaccinated, for starters. And school leaders learned ways to keep students safe at school, including social distancing, hand washing and sanitizing.

He firmly believes in the importance of school attendance in helping students gain social skills, learn about their interests and consider college and career options. He also says summer school has been great for keeping kids connected.

“Eighteen months ago, schools were totally shut down,” Peterson said. “There’s a gap in social-emotional development. We have to keep kids coming back together, understanding routines and being around other kids. We’re a rural community, and if kids aren’t here, they can get a little bit isolated.”

He’ll continue easing into his relationships with educators and school employees, and he said he’ll take the district’s pulse from teachers, students and staff.

“The most important thing for me is, I want to listen and learn – listen to people and find out what their concerns are,” he said.

Peterson grew up in Little Chute and went to college to study and play football at UW-Whitewater. He didn’t get a lot of playing time in college, but he wound up coaching football and girls softball while teaching third grade in his hometown. He later served as an elementary-school principal in three districts, including seven years at Manitowoc, before landing the top job at Howards Grove. He said Southern Door is a great step up, both in terms of potential for the district and for him to serve a larger school district.

Peterson and his wife are raising three children, and he has two older sons, Jack and Nick, whom he named after Jack Nicklaus. Yes, he loves golf. He said he sees reading as the great fundamental for all learners, and his new office decorations reflect that. But the décor also gives away his love for the challenges of the “good walk spoiled.”