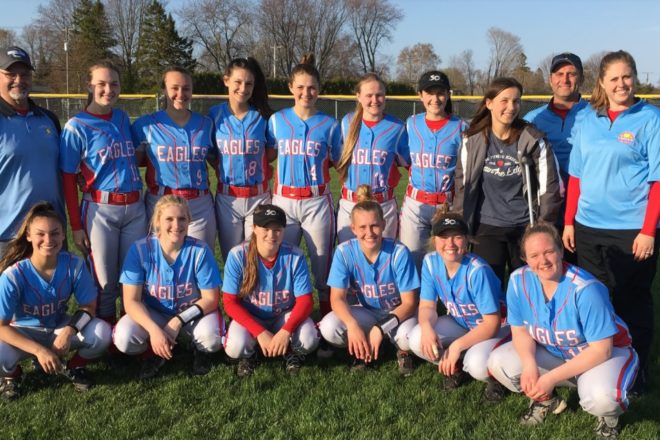 You’ll pardon Lexi Wery and her Southern Door teammates if they savor the excitement of making the Division 3 softball state tournament a little more than usual.

After three consecutive, tough, sectional-tournament losses, the Eagles exorcised the demons of those setbacks by defeating Oconto 6-0 on May 30 in the Chilton Sectional final. Southern Door (21-3), the No. 3 seed, will play No. 2 seed Campbellsport (16-7) June 7, 10 am, in Madison.

“Going to state is very surreal,” Wery said. “As a team we have been working very hard to get to this point, and after falling just short of our goal the last three years, we are all beyond excited.”

Campbellsport qualified for the state tournament for the first time with a 3-2 win over Random Lake in the final of the Mayville Sectional. The Cougars finished tied for second place with Kettle Moraine Lutheran in the East Central Conference with a 10-4 mark, just one game behind co-champions Kewaskum and Waupun.

Campbellsport started the season off 4-4 and then won seven straight to improve to 11-4. The Cougars lost three of the last four games of the regular season, including a doubleheader to Division 4 defending champion Horicon, which is the No. 1 seed in Division 4 this year. The Cougars blanked North Fond du Lac and Wautoma to win the regional title, then beat previously unbeaten Mayville 8-1 prior to their win over Random Lake.

“Even though we ended the season losing three of four, I thought we played very well, and my girls are playing with confidence,” Campbellsport coach Dan Heisdorf said. “The defense was outstanding, and we were facing some great pitching all year, which has helped us in our run in the playoffs.”

Alyssa Muench, Lauren Heisdorf and Adriana Dechant have combined to drive in 71 of the Cougars’ 169 runs.

“We are hoping that we won’t have to pitch to them with runners on base, but most likely that will happen,” Southern Door coach Courtney Renard said. “We want to see their swing in person and see what we can determine. We want to move the ball around in different locations and change speeds to keep them guessing.”

Muench, who will pitch at Division 2 Saginaw Valley State next year, has pitched 133 innings and compiled a 15-6 record. Muench has fanned 205 batters, walked 28 and posted a 1.50 ERA.

Much like the Cougars, Southern Door has a group of hitters who have produced some impressive numbers. Grace LeGrave, Lexi Wery, Kylie Neinas and Tehya Bertrand have combined to drive in 96 runs. Jackie Atkins leads the Eagles with a .471 average, and LeGrave is close behind at .457 and has scored a team-high 37 runs.

“Right now I’m pitching my best game on the mound,” Wery said. “Not only am I eager to continue winning some games, but I have all the confidence in my teammates standing behind me.”

Wery said qualifying for the state tournament was something she and her teammates talked about in April.

“At the start of the season, Coach Renard brought the team together and asked us our goals for the season,” she said. “At the top of all of our lists was to make it to state. By allowing us to communicate our goals, the team also developed a focused and game-winning mentality that has gotten us to where we are.”