Business and education leaders gathered at Southern Door High School on April 25 for the announcement that the school was one of 21 in the state to win a grant from the Wisconsin Economic Development Corporation (WEDC) to establish or expand fabrication laboratory (fab lab) facilities.

WEDC Vice President of Entrepreneurship and Innovation Aaron Hagar was on hand to announce the grant. He mentioned there was fierce competition for the total of nearly $500,000 in grants the WEDC was going to award, but the business and community support for Southern Door Schools made it one of the standouts among the 69 applications, he said. 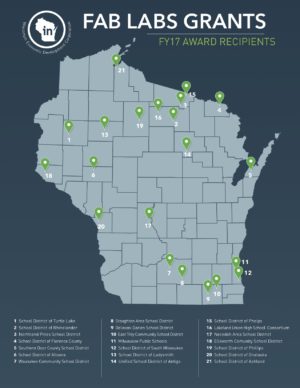 Fab labs are seen as a bridge between schools and the local manufacturing community in that they introduce students to 21st century equipment such as 3-D printers and laser engravers, hence the interest from the business community. Southern Door received the $25,000 grant to expand its Eagle Fab & Innovation Lab.

“Fab labs play a vital role in ensuring that today’s students have the skills they need to compete for the jobs of the 21st century by providing hands-on experience in areas such as design, engineering and complex problem solving,” Gov. Walker said in a press release.

Rep. Joel Kitchens was also on hand at the event and said the Southern Door School District is just another reason why he is proud to represent the 1st District.

Kitchens mentioned that as vice chair of the Assembly Education Committee, he was asked to chair a task force looking at the future of education. He said the conclusions the task force drew are being exemplified in the community/business/school partnerships the Southern Door School District has fostered on behalf of their students.

“This is just a great example of community support and business support,” Kitchens said.

Southern Door High School Principal Steve Bousley said the school has taken the very deliberate step of building the fab lab program with the intention of creating young people who are better prepared to enter the workforce or higher education, depending on their goals.

Bousley also pointed out another exciting aspect of the school’s fab lab – the grant requires that the fab lab also be open to the community, so the opportunity is there for a budding entrepreneur to develop a prototype at the Eagle Fab & Innovation Lab, fostering both innovation and economic development.

Caleb Frostman, executive director of the Door County Economic Development Corp., praised the comprehensive education offered at Southern Door and said the fab lab and the partnerships formed around it are the kinds of initiatives that may help to stop the suffocating workforce shortage in the county.

Southern Door School District Superintendent Patricia Vickman pointed to all the successful partnerships the school has made, including with Northeast Wisconsin Technical College (NWTC).

For more information on the state’s fab labs, including resources for teachers, visit inwisconsin.com/fablabs.