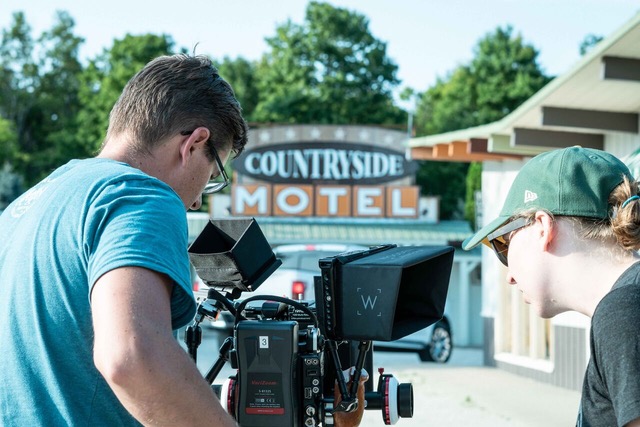 Filming “Mags and Julie Go on a Road Trip” at the Countryside Motel in Little Sturgeon. Courtesy of R.E.L. Films.

Liz Merner found herself fed up with the stress of the corporate business world, so three years ago, she decided to change careers entirely. That’s when she bought Countryside Motel and RV sites in Little Sturgeon, and went from insurance operations management to hospitality.

Now she runs the place with her boyfriend, David Wilkins. They live on the property and, together, take care of it all: the maintenance, laundry, landscaping and more.

Countryside’s rustic, Midwestern feel attracted the attention of Los Angeles actress, director and producer Ryann Liebl of REL Productions, who filmed scenes on the property in mid-July for her new movie, Mags and Julie Go on a Road Trip.

Countryside simply couldn’t be more country. Merner made the move from Oconomowoc with two mini and two regular horses (they’re across the street), and roosters from nearby farms herald the morning.

“It gives people a real country feel here, which is nice,” she said. People are enjoying it.”

It’s vintage, too. The buildings used to be located in Baileys Harbor and were then the Sands Motel. Merner bought them from Chris Merkle, who moved the buildings to their current location in 1994, so they’re really from the ’60s, Merner said.

When visiting Door County, Little Sturgeon often isn’t on visitors’ lists because many opt to head north. Merner feels the area tends to be ignored because of that, though the motel is only a half-mile away from the waters of Little Sturgeon Bay.

Merner’s most frequent customers are fishers, though all kinds of people – from California and even Austria – have arrived there for the area’s beauty and quiet – and quiet is what Merner thinks is nice about it. She hopes it doesn’t get as busy as it does farther north.

“It’s meeting all these different people, and it’s exciting to hear about where they’re going and why that’s been the best part [of owning the motel],” Merner said.

Still, a little attention wouldn’t go amiss, and the film will be a great way to get some publicity for Southern Door. When Merner received an email from Liebl asking to check out the place for a film, she invited her to see the property.

“At first I thought, ‘Yeah, right,’” Merner said. “And I told her I thought it was a joke,” she added with a laugh.

But it was a serious inquiry, and Liebl, who’s starring in and directing the film, thought it was just the right place for her movie. (Perhaps it was the mini horses that sealed the deal.) It’s about two women who embark on a road trip and – in the spirit of Bridesmaids and Planes, Trains & Automobiles – run into a series of hilarious challenges.

Liebl, who grew up in Cedarburg, Grafton and Mequon, came up to Door County a lot as a kid to visit friends on Washington Island. As an adult, she loves to hike and pick cherries with her son. She felt it was the sort of place that represents what Wisconsin is all about.

And the two days of filming at Countryside couldn’t have gone better. Those involved with the film ate good food at a nearby restaurant, filmed at a local gas station and interacted with the locals. It was great to be near the water, and the weather was perfect, Liebl said.

Other Wisconsin locations – Sheboygan and Milwaukee – are also included in the film.

“Sheboygan’s another place where everyone’s so supportive,” Liebl said. “There’s a sort of spirit here in Wisconsin – a spirit of helping that is very unlike anything I experienced in Los Angeles.”

The people who have helped her along the way have allowed her to create the film on a low budget, though it looks like a $5 million movie, she said.

Her cast and crew pay further homage to Wisconsin – they’re all from the state. Liebl was afraid she’d need to pull people from Chicago and LA, but she didn’t have to.

“I’m from here. I like it here. I want to make a movie here,” Liebl said, “so what if I could get all the cast and crew from here? And I did it.”

After 19 days of filming, the movie will enter into the postproduction phase, which includes editing and adding music. That process could take three to six months, and Liebl hopes the finished product will make its way into the world early next year.

If you can’t wait that long, though, track its progress on Facebook and Instagram or at magsandjulie.com.