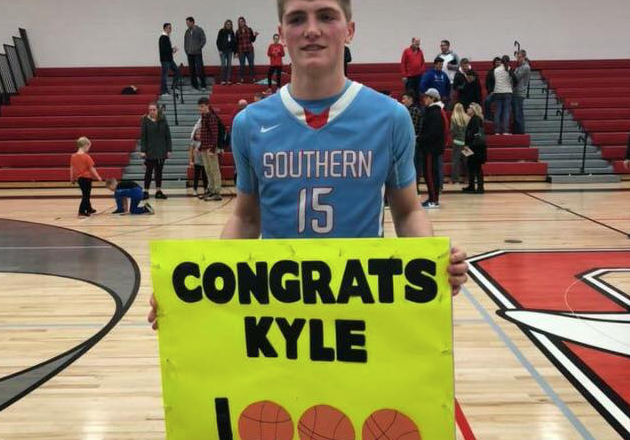 Kyle Daoust is rising up the ranks of Door County’s all-time leading scorers, with over 1,000 points in his prep career. Photo by Tonya DeBroux.

When Southern Door’s Kyle Daoust scored in the post against Oostburg Nov. 23, it put him in grand company amongst boys basketball players in Door County and his team.

Daoust’s left-handed finish was his sixth point of the game and the 1,000th point of his career. He became the 13th player in Door County history to eclipse this mark, a list that includes teammate Derik LeCaptain and Eagles’ head coach Derik Hawkey.

“Lots of people were asking me about it since I left last season only six points away,” Daoust said. “It’s cool to share my name with the other 1,000 point scorers because they were such great ball players.”

Including a 22-point effort against Roncalli Monday night, Daoust has accumulated 1,037 points, moving him past Chris Curtin and into 12th place in county history. With a few more efforts like Monday, he’ll move into ninth, passing Sturgeon Bay’s Nick Greisen and former teammates Mitchel Neubauer and Mitchel Gerend.

“Now that it’s over we have much bigger goals set for the rest of the season,” Daoust said.