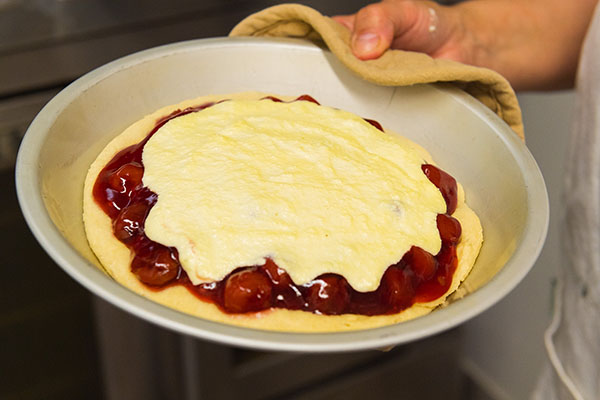 Belgian pies are a staple of celebrations in southern Door County. Here a cherry-filled pie with cottage cheese topping is ready for baking. Photo by Len Villano.

Southern Door County is steeped in Belgian heritage. The home of the largest North American Belgian settlement keeps many traditions of the homeland alive, particularly in the kitchen, and none is more famous than the Belgian pie.

Fillings are varied as well. In my mother’s kitchen, prune, apple and raisin fillings with a cottage cheese topping were tradition, as well as rice topped with whipping cream. Over time we added cherry, blueberry, apricot and poppy seed.

Making pies in my mother’s kitchen was more a lesson in observation rather than participation. My mother, Jean Guth, was very particular in mixing the dough, filling and baking the pies to perfection, so much so that when faced with the task as an adult I had no idea how that part was done.

By the time I was 25 and wanted to try my hand at the art of Belgian Pie making. My mother had passed away, but she left her recipes and many memories to draw upon.

With the help of the late Shirley Wautier, my mother-in-law at the time, we were able to complete the task together, making 30 – 40 pies twice yearly. Since then, the recipe has been reduced and is being taught to others. 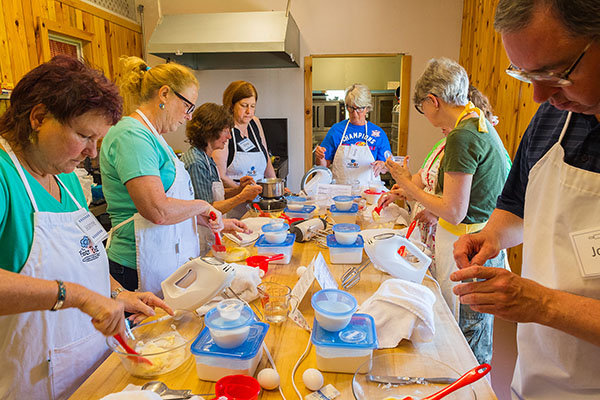 A class learns the secrets of making Belgian Pie. Photo by Len Villano.

Crumble yeast in a small bowl, sprinkle with ¾ tablespoon sugar and pour water over yeast. Cover with wax paper, wrap in a towel and let stand until bubbly.

In a saucepan, heat the cream on medium heat until a skin forms on top. In a separate bowl, beat eggs, sugar, salt and room temperature butter. Add cream and beat, then add yeast.

Add one cup flour and continue beating with mixer until dough creeps up the beaters. Then work the dough by hand, adding flour until it no longer sticks to your fingers, being careful not to add too much flour.

Dough will be soft, but you should be able to cause an indent in the dough that will stay. Cover, and let rise until double in size while making the filling.

Drain cherries and reserve juice for glaze. In a saucepan combine sugar, cornstarch and salt. Gradually add the cherry juice and stir until smooth. Cook and whisk until thickened.

Separate egg whites from yolks and set aside the whites. Squeeze the moisture out of dry cottage cheese with a cheesecloth. Discard the liquid.

In a food processor mix together small curd creamed cottage cheese alternating with the dry curd that has been drained of all whey. Add sugar to the cottage cheese mixture. Whisk the egg yolks until smooth. Add to the cheese and mix well.

Assembling the Pie and Baking

Lay terry cloth towels on table with wax paper over them. Pinch off a fist-size amount of dough. Shape into a biscuit form and place on the wax paper. Let rise until double in size.

Place biscuit in a greased pan (preferably an aluminum pan greased with lard) and pat with fingers leaving a ridge at edges to prevent the fillings from running over. Add the cherry filling (approximately one cup per pie). Cover the cherries with the cottage cheese topping leaving some of the filling showing at the crust edge.

Bake at 350°. Start pies on the second to the bottom rack, check frequently, and when crust is golden brown on the bottom (about six minutes), transfer the pies to the top rack. Bake approximately four more minutes.

Set pies to cool on terry cloth towels that have been covered with flour sack towels. This helps absorb the moisture so the crust doesn’t get soggy.