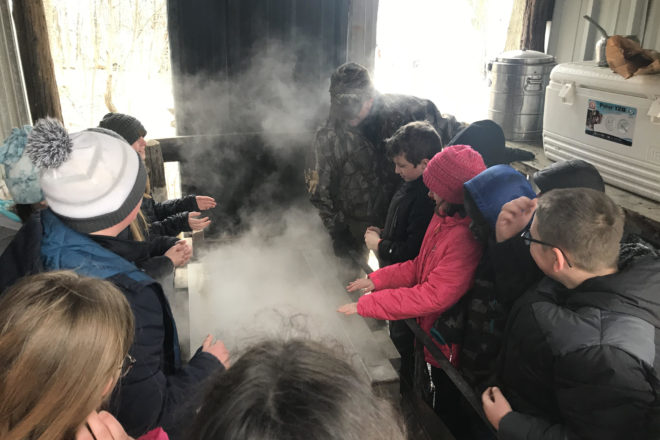 This mid-March 2020 photo – taken just before schools were forced to close due to the global pandemic – shows Southern Door School District fifth-graders learning about the maple-syrup-making process as part of a Farm to School learning program. Such programs will increase in the future thanks to a $50,000 planning grant the district recently received. Submitted photos.

Vickman wants to change that – and a $50,000 grant that the district has received will help.

“We want to plan how we can incorporate and use locally grown produce and products in our food-service program,” Vickman said.

SDSD was among the 159 grantees across the country that received some of the $12.1 million that the U.S. Department of Agriculture’s Farm to School Program awarded last week. The program’s core elements allow districts such as SDSD to buy more from local producers, feed locally grown produce to kids, and teach the kids where and how food is grown using hands-on activities related to agriculture, food, health and nutrition.

Of the six grants awarded in Wisconsin, only two are planning grants like SDSD’s. Vickman said the district will use the money to create a Farm to School Action Plan that creates agricultural education projects and activities for each grade level, 4K-12. Before the global pandemic forced schools to close, for example, fifth-grade students were tapping trees as part of a maple-syrup-making project. The district will create similar signature programs for other grades.

SDSD’s second goal is to significantly increase consumption of local agricultural products in its schools by developing locally focused procurement, delivery and processing.

“We have to recruit a coordinator to connect with the community to learn who’s even interested in being more connected with us,” Vickman said. The district also intends to reestablish a school garden and buy new equipment for the cafeteria, such as a hydroponic herb-growing station that will be available this year.

In addition to connecting kids with fresh, healthful foods within their community, another goal is to enhance the students’ understanding of the links among those foods, the land, the local economy and occupations.

“We haven’t brought that connection in,” Vickman said.

It’s important that the students connect with the people in the district who make their living on family farms, Vickman said, because the agricultural community is strong, as is the district’s FFA program. She said opportunities exist for youth within the agricultural industry that they may not know about.

The district’s current Farm to School Program and its readiness for expansion made the district’s application stand out, according to the award letter. The grant-planning committee included community members Moriah Brey, Rich Olson and Toni Sorenson, along with school-district staff members Jessica Meacham, John Swanson and Vickman.