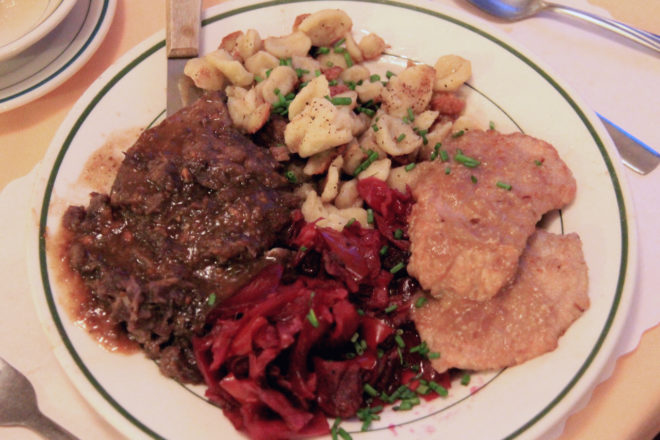 On September 22, 2018, summer is departing just as Oktoberfest is beginning, making for a bittersweet change of seasons. With one hand we wave farewell to the season of sun, and with the other we hoist a stein of Franziskaner to cure our end-of-summer blues and celebrate our German ties. But Bavarian beer isn’t the only way to partake in this holiday; German food is also a hearty part of the Oktoberfest celebration.

To satiate the German portion of my heritage, I sought out the most authentic plate of Oktoberfest food I could find which led me to The Hof Restaurant. This classic breakfast and dinner establishment has been a part of The Alpine Resort since the 1920s when brothers Paul and John Bertschinger built the resort and golf course. The name “Hof” is Swiss-German, meaning a courtyard or gathering place, and the food is described as having Swiss-German flair. 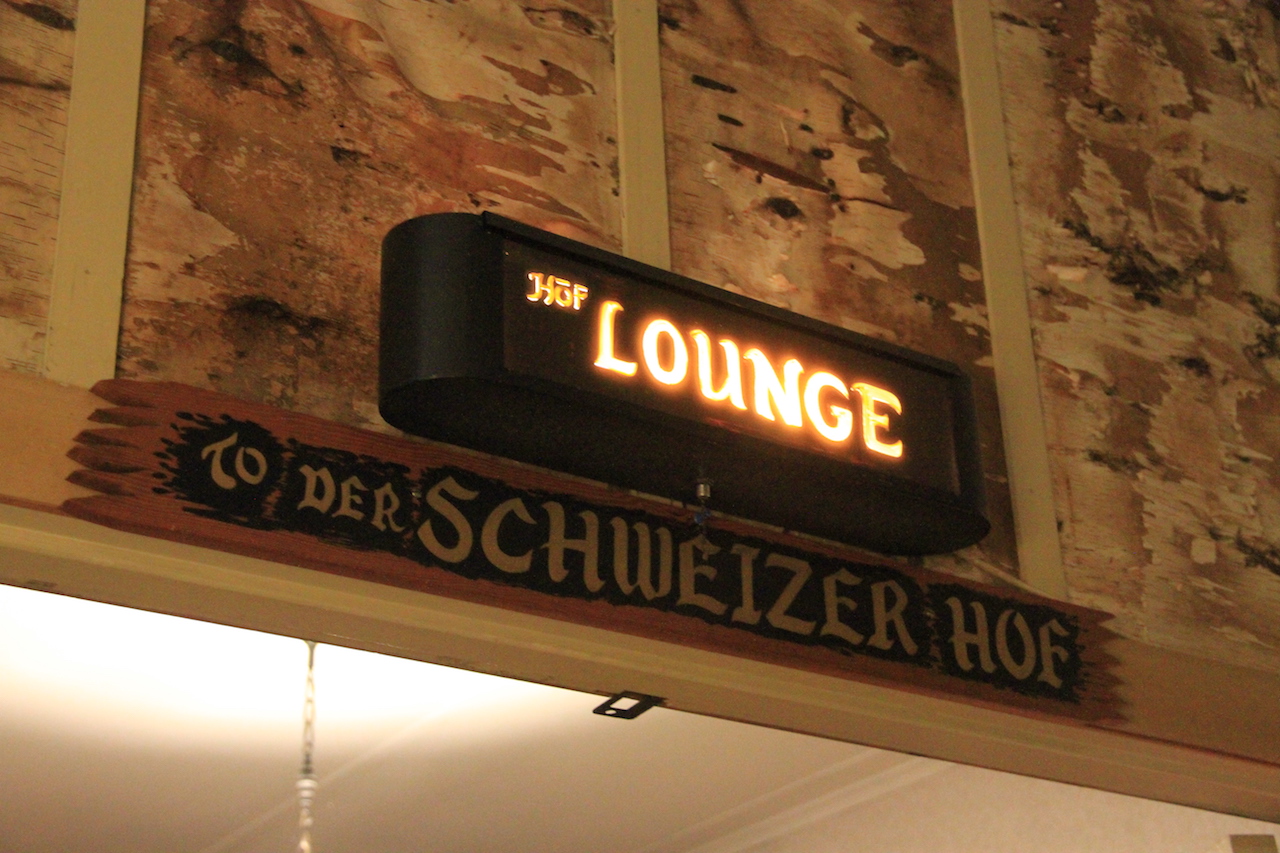 The Hof Restaurant dining room has been around since the 1920s. Photo by Aleah Kidd.

Located on the serene bay just south of Egg Harbor, the location couldn’t be more beautiful. Upon walking through the main entrance you are immediately drawn to the view through the lakeside windows overlooking the water. The front desk is to the left, and the dining hall to the right, but straight ahead is a large enclosed deck filled with white rocking chairs atop green carpet. Gazing out from the deck the shoreline wraps around your line of sight, showing off the pristine location of the resort.

After taking in the view, we were led to our table in the dining hall. The dining room was large with high ceilings and more water views. A live jazz quartet, Jim Yorgan and The Alpiners, was playing softly in the corner as we ordered our beverages and explored the menu. As promised, I found a sizeable amount of traditional German food, including:  Kartoffelpuffer, Wiener Schnitzel, Spaetzle Mac & Cheese, Sauerbraten and Knockwurst.

For a starter, I chose the Kartoffelpuffer, or German potato pancakes, that came with sour cream and applesauce. The appetizer came with three crispy pancakes made of shredded potato. Essentially it’s a bit like taking your hashbrowns and forming them into cakes. The sour cream added a tangy element, and applesauce a bit of sweet. 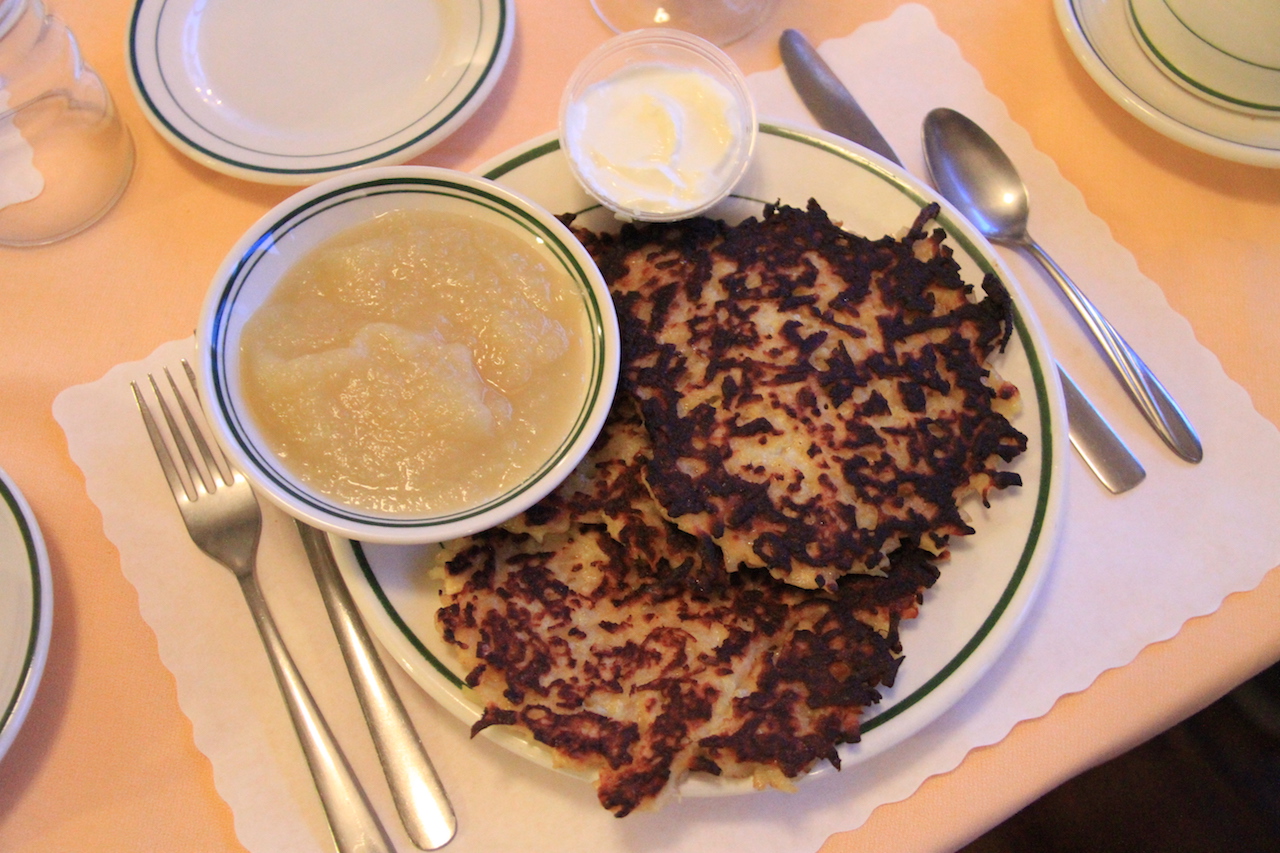 Feeling fully invested in the Oktoberfest theme, I selected the German Sampler for my main dish which included red cabbage, spaetzle, sauerbraten and wiener schnitzel. Upon receiving our entrees, my plate looked like a delicious smörgåsbord of savory bites. I cut into the wiener schnitzel first.

Wiener schnitzel, meaning Viennese cutlet, is a veal cutlet hammered flat and crusted with flour, eggs and breadcrumbs. Once coated, it is fried in butter or lard until golden yellow and cooked through. The flattened shape of the veal provided a good ratio of buttery breading to meat, and as you can imagine, it was delicious.

My least favorite of the platter was the sauerbraten, or, German pot roast. It is translated as “sour roast” referring to the marinade of vinegar, water, herbs, spices and seasonings that gives the meat a slightly tangy and sour taste. I suppose I prefer my pot roast more on the rich and salty side with onions, carrots and potatoes. Despite the sour, it went nicely with the remaining bites of potato pancakes.

The red cabbage offered a quick change of flavors with its vinegar and spice flavorings, and the spaetzle added more of the crumbly, breaded comfort food. The two sides balanced and enhanced the meats in a way that kept the flavors interesting. While German food isn’t always at the top of my cravings, it was a treat to experience The Hof Restaurant and give a nod to my roots.

Partake in your own German food experience at The Hof Restaurant before Oct. 14, 2018 when the resort closes for the season. Considering that the resort and restaurant are currently for sale, this could be your last opportunity. Make reservations and find more information at alpineresort.com/restaurant/index.php.