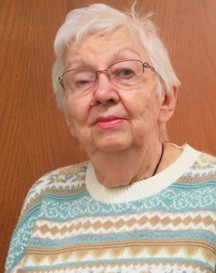 Anita Beckstrom will be the featured poet in the UU Fellowship’s Dickinson Poetry Series on April 8 at 7 pm.

Born in Sister Bay, Beckstrom’s roots are deep in Door County. She returned to Sister Bay in 1950 after being raised in Milwaukee and studying art at Milwaukee State Teacher’s College, now University of Wisconsin – Milwaukee. She married, raised three daughters, and worked at Gibraltar Area Schools as an audio-visual aide in the library for 21 years.

After moving with her husband, Lenny, to The Meadows at Scandia Village in Sister Bay in 1999, she took a Clearing class in poetry, became a member of The Wallace Group of poets, and participated in many retreats and workshops with noted Wisconsin poets. Her poems were accepted in various publications and she published a chapbook, Rare Yellow Bird, in 2011.

Beckstrom explains, “I like to write sparse poetry without punctuation, either humorous with a twist or pensive and reflective, poems about being vulnerable and human. Some poems seem to drop in place while others need prodding and pushing. It makes me feel so fulfilled when people are touched by my poetry.”

On the second Wednesday of every month, the Dickinson Poetry Series features a reading by a local or regional poet followed by an open mic and reception. The public is welcome, and admission is free. The UUF is located at 10341 Hwy. 42 in Ephraim. For more information call 920.854.7559.