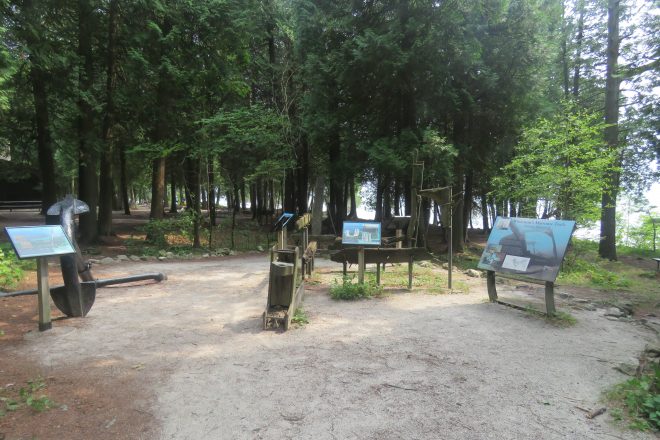 On the Lake Michigan side of Door County, in Whitefish Dunes State Park, there are excellent shipwreck displays near the parking lot, a picnic area and the lakeshore. One can get down the rocky shore to the water’s edge, even when it’s windy. There are two sets of exhibits: one outside, and one inside the nature center.

The outdoor exhibits feature a Wisconsin Maritime Trails Historic Shipwreck Marker about the Ocean Wave, plus a variety of interesting displays. You can read about anchors and the bones of a ship, how ships were powered (wind or steam), how they were built to be strong and control leakage, and why they wreck.

The Ocean Wave – a wooden, two-masted scow schooner – was built in 1860 at Hansen’s Island, Michigan. It was 73 feet long, with a beam of 20 feet and a gross tonnage of 73.72. Nine years later, it moved to Lake Michigan and carried limestone and other cargo.

On the morning of Sept. 23, 1869, it sank in 20 minutes after floating debris caused a large hole in the hull, but the entire crew survived. The wreck is in 110 feet of water off Door County’s Whitefish Point, and a seasonal Wisconsin Historical Society marker buoy marks the site.

Nearby, the nature center is also home to interesting exhibits, including several related to the Australasia, a 282-foot steam screw wooden ship with a beam of 39 feet and a gross tonnage of 1,829.32. It was built by James Davidson in West Bay City, Michigan, in 1884. The ship’s owner and captain was James Corrigan of Cleveland, Ohio – the Australasia’s home port.

When it was launched, it was the largest wooden ship ever built – a bulk carrier that usually towed a large barge. The Australasia set records for salt cargo when it carried 3,150 tons of salt, and for wheat cargo when it transported 80,000 bushels of wheat. The ship’s great size made it competitive with the steel bulk carriers.

On Oct. 17, 1896, the Australasia was carrying a 2,200-ton load of coal from Cleveland to Milwaukee when it encountered adverse winds, changed course and headed toward the Wisconsin shore for shelter. At approximately 6 pm, the crew discovered a fire on board that they could not control, abandoned their dinner and the ship, and safely reached Jacksonport.

Several hours later, the tug John Leathem, under the command of Captain James Tufts, left Sturgeon Bay and found both the abandoned Australasia and the unfinished meals. The rescuers finished the dinner and then attempted to tow the burning Australasia toward Sturgeon Bay.

In the process, eight tow lines broke, and the ship was abandoned just off the shore of Whitefish Dunes. Approximately 140 tons of coal ended up on the beach. The John Leathem returned to Jacksonport to pick up the crew of the Australasia and returned its members to Sturgeon Bay.

The wreck of the Australasia is now approximately 850 feet off the southern shore of Whitefish Dunes State Park, about 15 feet underwater. A seasonal Wisconsin Historical Society marker buoy marks the site.