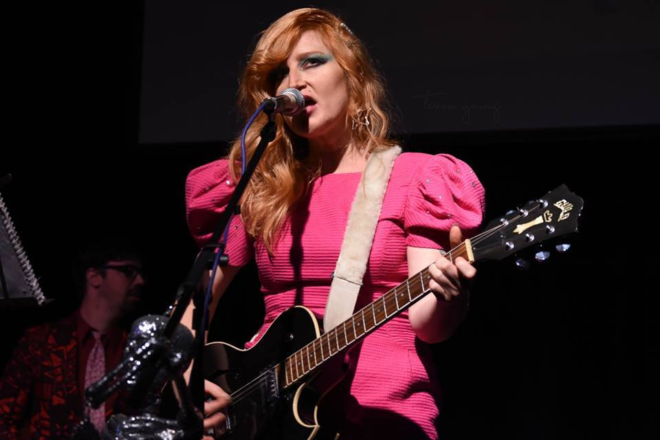 If you live in Door County and haven’t had the pleasure of attending a Dark Songs performance, you’ll have your chance to make amends tonight and tomorrow night.

It is one of three annual, week-long musical events throughout the year – with June’s Steel Bridge Songfest and February’s Love on Holiday – hosted by the Holiday Music Motel and its co-owners, pat mAcdonald and melaniejane. Over the course of a week, a collection of musicians hole up in the motel and collaborate to write and record new music around a given theme. The week culminates in two performances at Third Avenue Playhouse.

Dark Songs is a spooky iteration of the collaborative events, performed in October and described by pat as a “Halloween grab bag extravaganza.” It began in 2009 as a tribute to Edgar Allan Poe’s 200th birthday (the event that year was called the “Edgar Allan Polka.”) The festival has kept its polka roots, always prominently featuring the trombone and accordion but has altered its focus each successive year.

The performances this year are called “Dark Songs: The Taking of The Tower of Song, A Comedy of Terrors,” partly referencing the Leonard Cohen song, “The Tower of Song.” The seeds for the show this weekend were planted when pat mAcdonald saw the recent Stephen King film adaptation, The Dark Tower, about an imperiled tower that holds the world together.

Thinking about Door County’s own grain elevator as that tower, pat realized Dark Songs could incorporate a storyline. He sent an email to the musicians with specific ideas he had, and welcomed everyone to add to the story as they saw fit. pat had a couple of specific characters in mind, such as the aforementioned grain elevator as well as a narcissistic lighthouse, so a couple of songwriters were assigned to write from the perspective of these characters. Other than that, the story and music only take shape once the musicians arrive. 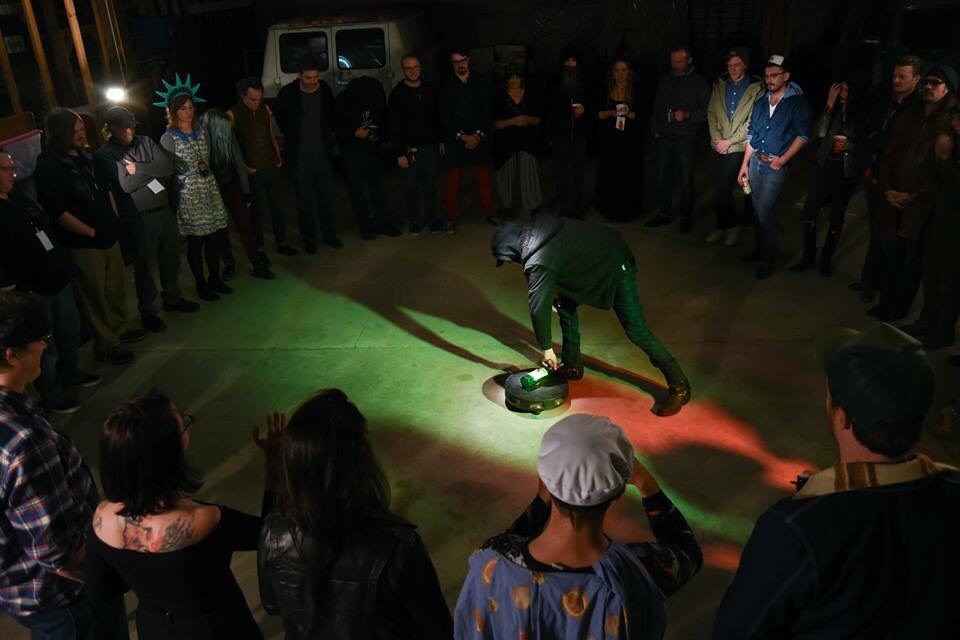 Spin the bottle is a key component of the Dark Songs collaborative songwriting week. Photo by Teresa Young.

The preparations for the performances this weekend began last Sunday, when this year’s group of songwriters arrived at the Holiday Music Motel. Spinning a bottle has always been the method used for the Steel Bridge Songfest as a way to pair up songwriters with one another (pat and melaniejane speak glowingly of their new and improved bottle that features lights and a sturdy spinner). But this year, pat added a new wrinkle, placing an alphabet around the black base of the bottle.

“When they spin the bottle, there will also be that element of spinning a letter, and the letter will correspond to a list that will have fragments of a storyline, or just points of inspiration,” he said.

Using pat’s sparse story directives, some characters, and the results of the bottle, the songwriters write and record the one-of-a-kind music that you will hear this weekend.

Even with a skeleton of a storyline in place, there is no way to know what the music will sound like or even what form the story will take. melaniejane relishes the unpredictable nature of the event.

“That’s kind of the beauty of it. You’re getting all of these people together and you have to be open to the different directions it’s going to take,” she said.

In addition to this unknown feature of the event, the motel will host two new songwriters. This year’s festival will feature Sophie Sputnik, a drummer and vocalist who recently moved to Door County, and Sthorm, an emcee Chicago native, newcomers that pat and melaniejane are excited to showcase.

They, along with more than 30 other songwriters, will produce and record at least one song every day in the week leading up to the performances. It is only after this incredible week of musical creativity and collaboration that we, the audience, get to reap the benefits.

It is an event like no other in Door County and one that has come to represent the entire mission of the Holiday Music Motel.

“The foundation of everything we do here is collaboration,” melaniejane said.

The Dark Songs performances will be held Oct. 27 & 28, 7:30 pm each night at Third Avenue Playhouse in Sturgeon Bay. Admission is $5 at the door.