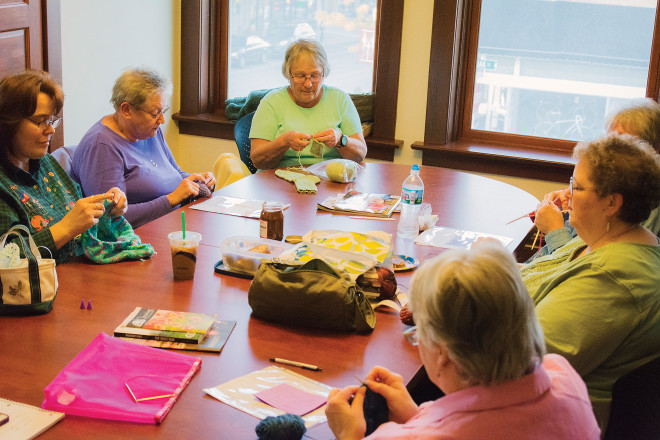 Sturgeon Bay’s Spin is a colorful, bustling scene. The former bank turned “yarn-topia” features rows of shelves stuffed with yarn – wool yarn, alpaca yarn, bamboo yarn, paper yarn – in all the colors of the rainbow, as well as knitting needles, buttons and books teaching readers how to create simple items, such as scarves and hats, and chic-looking garments like shawls and sweater dresses.

At the center of the scene, wearing a colorful hand-knit cardigan, is owner Terry Smith-Kletzien, who was introduced to knitting in 4-H. 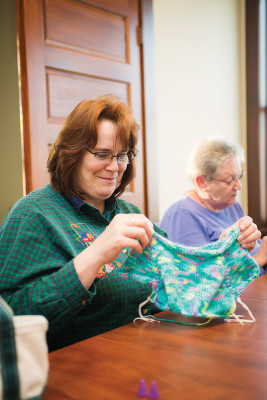 “I was probably nine years old,” she recalls. “I grew up in Oconto County, very rural, everybody was in 4-H and all the girls learned how to knit.”

She took the simple instruction she learned in 4-H a step further, creating sweaters for her Barbie dolls. “There were no patterns for [Barbie] sweaters,” she laughs, “so I figured it out and taught myself how to do that.”

Smith-Kletzien continued knitting throughout middle school, high school and college. “Then life got in the way – careers, marriage,” she says. When she picked up the knitting needles again a little more than a decade ago, “It was like riding a bike,” she says. “You don’t forget, your hands don’t forget.”

After owning and later selling the Inn at Cedar Crossing, Smith-Kletzien worked as a partner at a real estate firm and noticed a former bank in Sturgeon Bay was for sale. “I’ve always admired this building, this little bank,” she smiles. “I grew up a banker’s kid.” After a year and a half of renovations, Spin opened in 2007 and now attracts knitters from across the country as well as a tight group of locals who partake in Spin’s Open Knitting sessions on Tuesday mornings and Thursday evenings.

Many have been knitting since Girl Scouts, since their mothers or aunts taught them the art of creating socks, hats, sweaters, blankets and shawls with needles and yarn.

“I’m a newbie,” admits Paddy Elliott, who credits the ladies around the table for helping her learn to knit. “I just finished my first sweater and now I’m making my granddaughter a sweater.” She holds up the work-in-progress, a miniature pastel sweater.

“But she can crochet us under the table!” says Linda Sealey, knitting a shawl with rich brown and gold colors.

“Not everything turns out,” contin 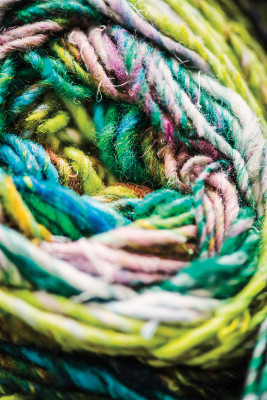 ues Elliott. “My rows aren’t facing the same way, but they’re telling me if I do the same thing at the other end nobody will know.”

“They push and pull you to get better,” says Andrew, who is knitting a pair of socks. “There is always something new to learn.”

“I do something and they say ‘Oh, how did you do that?’” says Stephenson. “You show the next person and even if they’ve been knitting longer than you, it’s just something they never saw or tried.”

The knitters share tips, patterns and help one another start or complete their projects successfully. “When you start new projects or patterns, you can come here and figure it out instead of sitting at home by yourself thinking, ‘What the heck?’” says Elliott. “Sometimes we get on kicks where we are all making the same thing.” The group laughs. “In different colors,” adds Sealey.

With so many yarn options, it’s a wonder how they choose what yarn to use.

“Half the fun is shopping for tools and things,” says Andrew.

“There is more variety now than there used to be when I learned,” adds Sealey. “They can make yarn out of almost anything.”

“I just bought some stuff that’s made out of sugar cane,” says Stephenson, holding out the soft yarn for others to touch.

“And there’s bamboo,” says Grunewald, adding, “When I go to a yarn shop I have to touch.” 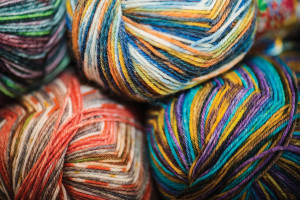 “You knit with certain yarns because they feel good,” says Sealey.

“One of my favorites is Alpaca,” says Grunewald. “I love the feel of that, and it gives off an oil from the sheep, your hands feel so nice, your wooden knitting needles just shine.”

With the pace at which the group completes projects, “We all have a stash,” says Elliott. Loved ones receive many scarves, socks and sweaters throughout the years. “Most of us have grandchildren,” smiles Andrew. They also give many items to various charity projects.

Others make money from their projects. Stephenson and Elliott sell hand-knit items at local farmer’s markets. “I make a lot,” says Stephenson. “If I’m going to sit, I knit.”

“I have to be careful when I vacu 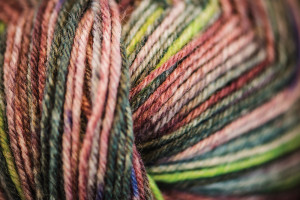 The women also knit for the camaraderie the craft provides, the friendships stitched together through this art form. “If somebody’s having a bad day you can express yourself and we’ll cry with you, if somebody is having a good day we’ll laugh with you,” says Andrew. “We’ve gone through births and deaths and ups and downs.”

They welcome all ages, all genders. “It’s one of those things that transcends political point of view, economic point of view,” continues Andrew. “When we come here, it doesn’t matter to any of us.”

The friendship, art and education takes place every day at Spin, not only during open knitting. “One of the most common questions I’m asked is ‘Where am I?’” laughs Smith-Kletzien. “They will bring in something they set down last winter and want to knit again.”

And Smith-Kletzien welcomes the questions, just as she welcomes the six women upstairs, the advanced knitter, and the beginner who has never held a needle in their life. “It’s meditative and it’s creative,” she says.

“And you’ll never find a more supportive group than these ladies,” says Andrew, smiling up mid-stitch. 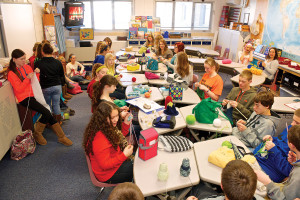 “Knitting is really coming back,” says Paddy Elliott during Spin’s Opening Knitting. “Kids are getting into it, in college, and at Gibraltar School the kids are allowed to knit in study hall and lecture classes.”

“And they are doing better in school,” adds Mike Andrew.

Matt Ledger wrote about the students who have embraced knitting at Gibraltar Schools under the instruction of Lauren Mittermann in the Peninsula Pulse newspaper. Below is an excerpt of the article, to view the complete article visit ppulse.com.

For the last five years, Gibraltar Middle School Social Studies teacher Lauren Mittermann has been the ringleader of an underground movement. Known as “Mitter’s Knitters,” the informal club now consists of about 40 seventh and eighth grade students who usually get together during lunch or after school to chat and piece together hats, socks, scarves or blankets.

“But this year I had one student ask me if he could knit during a class,” said Mittermann. “And I didn’t know what to say about that, so I started doing some more research.”

Some poking around on the internet led Mittermann to a number of articles that suggested knitting in class helped a lot of students, especially the easily distracted ones, and gave them better focus during lectures or activities. The repetitive motions and sense of purpose keep students “in the zone,” allowing them to truly hear their teacher and actively participate in class.

“So I made a deal with this one student and said I’d try it, but grades have to stay the same or go up,” said Mittermann. “And they went up. I would say he was a struggling C student and now he’s a B- or A student.”

And just like that, “Mitter’s Knitters” came into the light. Mittermann now allows all of her knitters to knit during class, provided they prove they’re paying attention and their grades don’t falter, and a number of Gibraltar’s other teachers are also letting kids make scarves while they listen to lectures.

“I definitely like knitting in class because my hands are fidgety,” said student Bailey Stark during a lunchtime “Mitter’s Knitters” meeting. “For me, it’s a stress reliever.”

“It’s just really relaxing,” said Seth Johnson, who is one of a number of eighth grade boys who took up knitting. “And apparently it’s good for your brain or something, too,” he finishes.

But for the students, knitting is far more than just a way to sit still and get good grades. A lot of them use it as a form of artistic expression, carefully choosing the colors of their yarn and the projects they’re going to take on. It’s also a way to challenge themselves, as they look online for new patterns or YouTube videos explaining how to undertake complex projects.

“I was kinda nervous, because I was thinking ‘What are parents going to think about this?’ Because suddenly everyone was going home asking their parents to take them to ShopKo or Jo-Ann Fabric to buy yarn,” said Mittermann. “But the parents were thrilled. They’ll check [their kids’] rooms expecting them to be playing video games, and they’re knitting.”