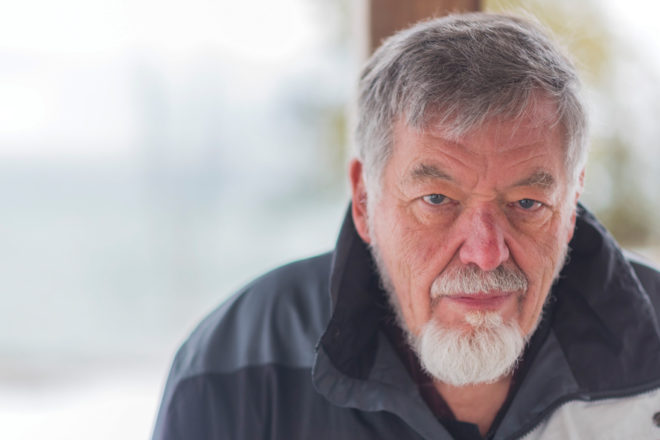 “I’m not an American Indian,” Tom Davis told me at the beginning of our conversation. People might well assume that he is descended from an indigenous people, this writer who has worked for six different tribal colleges and universities in various leadership positions.

As a boy growing up in Grand Junction, Colorado, young Tom was good friends with Paul Pletka. “He became fascinated by arrowheads,” Davis recalled, “and became famous as an artist for doing paintings out of the heritage of American Indians.”

“That reinforced my interest,” he continued, explaining his pathway to a career of four decades providing service for tribal institutions of higher learning as they work to develop strong academic programs and achieve accreditation.

When he was 12 Tom wrote his first poem. “It was about Geronimo,” he remembered. “It was terrible!”

But his verse matured. The prolific poet enjoys the sonnet form, and has written, to the best of his recollection, 70 to 80 in that genre, using traditional French, Italian, Spenserian and Miltonian types. “But I go through periods,” he explained.

“I wrote a series of tribal college poems that were published in a chapbook,” he said. During a time in New Mexico he wrote many narrative poems and lately, a number “exploring the idea of the mythos of the area” of Door County. He and his artist-poet wife, Ethel Mortenson Davis, live in Sturgeon Bay.

Davis’ connection with American Indian education began when he was an undergraduate at the University of Wisconsin — Oshkosh majoring in English and history secondary education. At that time, U.S. Health Education and Welfare had charged the Shawano Public Schools with racial discrimination and as response to that environment, American Indian parents formed the Menominee County Community School, an alternative institution that advertised a position for a high school English teacher and hired the new graduate Tom Davis.

“I love teaching,” Davis said, “but over the years it has been difficult to teach as much as I would have liked.” And then he explained the reason:  “I was too good at raising money!”

While he began at the Menominee school teaching English, he “ended up writing grants and developing curriculum,” he said.

And that position was followed by others:  director of asynchronous education at Bay Mills Community College in Brimley, Michigan; interim president at Fond du Lac Tribal and Community College in Cloquet, Minnesota; president at Lac Courte Oreilles Ojibwa Community College in Hayward, Wisconsin; Little Priest Tribal College in Winnebago, Nebraska; and a role in founding the College of Menominee Nation in Keshena, Wisconsin. He helped establish the World Indigenous Nations Higher Education Consortium (WINHEC) and in 2013, retired as provost of the Navajo Technical University (NTU) at Crownpoint, New Mexico.

Although officially retired, Davis recently worked with NTU in writing an application for a Promise Zone designation on behalf of the Navajo Nation, a territory that includes Arizona, Utah and New Mexico. Administered through the U.S. Department of Agriculture, the program partners the federal government with local leaders to provide assistance to high-poverty communities regarding economic and educational opportunities, and in dealing with health and crime issues.

Davis has published four books, all connected with the culture and environment of American Indians throughout the United States. His bestselling Sustaining the Forest, the People, and the Spirit (2000) explains the Menominee Indians’ tribal practice of sustainable environmental development as they manage their 230,000-acre forest. He concludes in his study that the Menominee model is a microcosm that provides “a valuable lesson for the world” as nations cope with the life-threatening issues involving the earth.

He also writes fiction. Salt Bear (2011), a fantasy novel intended for a juvenile audience, presents mythical creatures of the American West that deal with the power of healing, the miracle of tolerance, and the meaning of courage, fear and love’s grace.

His novel Inside the Blowholes (2013; out of print) is set in the Badlands and involves the legend of dragons from the Zuni culture, the premise that ancient dragons took refuge from extinction in the lava tubes from prehistoric volcanoes.

The Alkali Cliffs (2014) is set on the alkali flats of North Delta, Colorado, the area near where Davis was raised. The story tells of the subsistence existence of a poor family struggling against a bank that is determined to build a rendering plant next to their small farm, a plot of land patterned after that of Davis’ grandmother. The story introduces issues of environmental responsibility, the disparity between the rich and the poor, and the acceptance of poverty as a way of life.

Davis’ current book project explores a little known event in the history of Door County. In 1850, a black preacher and six families formed a community on Washington Island hoping to escape slavery. Fearing for their safety, they disappeared one evening, leaving no indication where they had gone. Davis suspects they made use of the Underground Railroad to take refuge in Canada.

But while Tom Davis is a champion of all peoples who are outside mainstream culture (hence his role in helping to establish the WINHEC), his connection with American Indians has been a focal point in his life.

“American Indian spirituality is a deep thing,” he said. “When I got cancer, Raymond Redhouse and I went through a ceremony using a crystal that had been handed down for hundreds of years for use in healing ceremonies.”

That spirituality translates both into his work and writing, he explained, and “gives what you are trying to do a spiritual edge that a lot of current poetry doesn’t have. Some call it mystical. It gives you a sense of wholeness of life, not individual pieces, but from the big to the tiny, from the units of things to the specific thing.”

And just as aspects of American Indian culture sustain Davis as a writer, the literature that writers produce helps sustain that way of life. “If a culture is living,” Davis said, “it has to change while still maintaining the core that echoes back through the ages — that formed it in the first place.

“An understanding of where the culture comes from” is gained by reading the literature produced and subsequently “you get the sense of what the living part of the culture is today. It’s a beautiful thing when you think about it. Literature expresses the substance and the tradition, the breath of the culture as it exists in today’s world.”

Davis’ record of accomplishment is impressive, but he responds to praise by maintaining that his achievements are the result of the cooperation and contributions of many people working together. And what emerges, an observer might add, is a collective spirit born of light.

To better understand Tom Davis as an educator, an environmentalist, a champion of the underprivileged, and a writer, visit the blog he and his family maintain at fourwindowspress.com. The couple, their children and grandchildren feature their poetry, art and photography on this site.

The beginning of Door County’s orchards and culture

They crawled out from their canvas tent and stared

At stumps still littered through the opening

Their two-man saw had cut into the spring-

Deep twilight made by woods so thick they dared

An axe to fell a wilderness that flared

Across so many miles no bird could wing

Its way to planted orchards blossoming

Into the dream the couple, logging, shared.

So tired she barely kept her head upright,

The woman started up the morning fire.

She sighed to see the stumps that made the field

An emptiness surrounded by the choir

Of birds in trees where she in silence kneeled.

“The canopy is peeled

Away enough to let us plant the trees,”

He said.  “Their blossoms will attract the bees.”

She looked and tried to tease

The cherry trees he saw into her mind,

But all she saw were stumps, work’s endless grind.