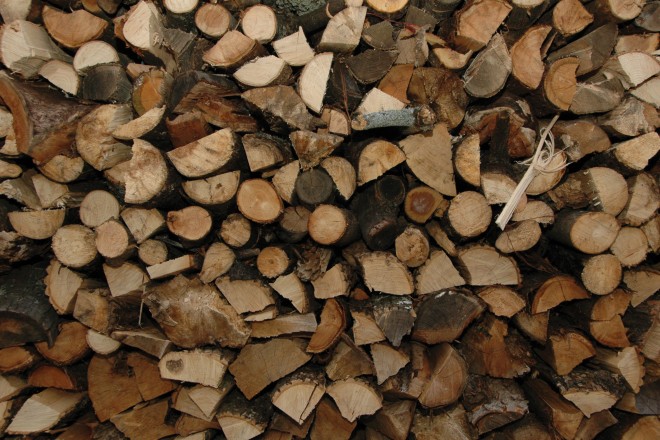 When we first purchased our house, I imagined that I would spend some of the days of the long Door County winter sitting beside the fireplace in the main room. Perhaps I could pass the time with a book and a mug of coffee – what better way is there to spend a January day? As it worked out, the fireplace in our house was not very efficient. A fire commonly had the effect of making the room cooler, as it pulled the warm air from the room, sending it up the chimney, along with all the heat from the wood we burned. A fire in the fireplace, while pretty to look at, turned out to be a real disappointment in terms of comfort and practicality.

When we did some remodeling in the house, we used the opportunity to get rid of that poorly designed fireplace. We replaced it with a small woodstove. We had no expectations that the little Jotul stove we purchased would be much more than a supplement to our gas furnace. We only hoped it would keep our main room warm. To our pleasant surprise, not only did we find the little glass fronted stove more aesthetically pleasing than the old fireplace, but it could also heat nearly the whole house. On an average winter day, when we are home and keeping the fire going, the furnace doesn’t run. In fact, the only time the furnace does run is in the night when we are asleep. Because of the small size of the firebox, a full load of wood only burns for about five or six hours, and then the stove goes cold. So when we wake up in the winter months, we clear the ash from the previous day, and start over, silencing the gas furnace for another 20 hours or so.

Of course, at one time wood stoves were the only heating option. Cutting and splitting firewood was an inescapable chore if you hoped to eat warm food or avoid freezing to death in the winter. Perhaps for that remembered drudgery, stoves began to disappear from homes when heating became a mere matter of keeping up with your bills. Still, there were some that continued to heat with wood, and others always kept the wood stove as a back-up or supplemental heat source. Today, stoves are again becoming more common and for a couple of good reasons. While they remain quite practical in terms of cutting heating costs, there is simply something charming and comforting about a room heated by a wood fire.

Once a local dealer in woodstoves, Michael Steele of Fish Creek keeps his home heated with a high-efficiency stove which he’s had for thirteen years. Located in the front of the main room in the house, the Lopi stove keeps the house so warm that many days in the winter they open the patio doors to bring in some fresh air. The stove has a glass front so that you can enjoy watching the fire, and has an electrical blower to circulate the heated air. “We burn about three cords of wood each year,” says Steele, “but we have a gas furnace for back-up and for when we are away.” He says that when he has a fire burning, it is usually warm enough for shorts and t-shirts in the middle of winter.

Dave and Laura Nielsen also burn three cords of firewood each year, but they are keeping fires going in two stoves. While the stove in the center of their house is a matter of practicality, the other is a matter of pure pleasure. Out the back door and alongside their woodshed, the Nielsens have a traditional Scandinavian wood-fired sauna for winter sweat baths. Every winter nearly one cord of wood goes to firing a small stove in the tiny cedar building, bringing the interior temperature up to 160 degrees several times a week. “It takes me about a week to split all the wood we need for the winter,” says Nielsen, “but that’s spreading the work out, a few hours each day.” His efforts are repaid in two ways:  the back-up electrical baseboard heat in their home is rarely needed, and they often enjoy the invigorating luxury of a session in a sauna, followed by a dash out into the snow.

Ted Baumgarten of Ellison Bay recalls his first wood stove when he was renting a house from Victor Welcker in Fish Creek in the early ‘80s. He ordered a small rectangular stove from Montgomery Ward and inserted it into the existing fireplace on the first floor. The little stove did a great job of completely heating the living area of the house. In fact it was doing such a good job that at one point his landlord warned him to shut it down “because the gas furnace was never running in the basement, it was getting too cold down there and the pipes were at risk of freezing!” When he moved out of the house, he took the stove with him and eventually passed it on to his brother Charlie. It is currently heating his house in Sister Bay.

If the idea of cutting and splitting wood does not sound appealing, you can always purchase seasoned wood and have it delivered. If toting it to the house and feeding the fire still sounds like too much work, there is another way to enjoy the comfort of a woodstove. Pellet stoves burn pellets made from compressed sawdust and wood waste which are widely available for purchase by the bag. The pellets are fed by a screw mechanism that introduces them one by one from the hopper into a combustion chamber. David Lea of Sweetie Pies in Fish Creek uses a small pellet stove to heat the pie shop in the winter months. Interestingly, for a spot that specializes in cherry pie, the pellet stove will also burn dry cherry pits. “I usually mix the pits half and half with soft wood pellets,” explained Lea. “The mixture burns a little more clean than the pits do on their own.” Lea says that if you want low maintenance, the pellet stove is the way to go. He loads the hopper once a day, and cleans out the ash only once a week.

While heating with wood requires substantially more effort and planning than simply turning up the thermostat, those who have stoves value them highly. In fact, while talking with people about their stoves I was reminded by more than a few of Thoreau’s famous axiom that “firewood warms you twice:  once when you cut it, and again when you burn it.” So for the effort of maintaining the wood pile, keeping the stove fed, and the chimney clean and safe, the added comfort and lower utility bills make it all worthwhile. When I split and stack my own wood, it is always with the thought of future hours reclining with that book and mug of coffee. When I finally have that time, it all seems to be worth it.