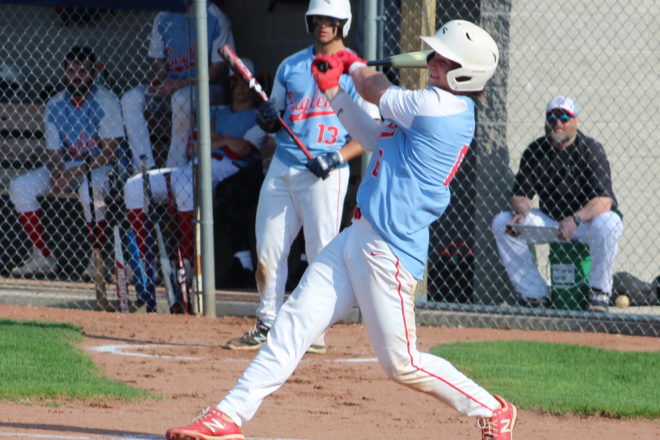 Southern Door’s Jack Peterson (6) and Christian Counard (13) were the top two hitters in the Packerland Conference this spring. Both were unanimous first-team, all-conference selections, and Peterson was named the Packerland Baseball Player of the Year. File Photo by Kevin Boneske.

Peterson Is Baseball Player of the Year

This year’s baseball All-Conference selections include Southern Door junior infielder Jack Peterson being named Player of the Year. Peterson – a unanimous All-Conference, first-team selection – helped the Eagles win their second consecutive Packerland title with a perfect 8-0 record and also led the conference in batting with a .710 average.

Ranly finished second in the conference with a batting average of .526.

The Clippers, who finished Packerland play with a conference record of 4-2-1, also had one player on the second team: senior midfielder Emma Reichel.

The Clippers finished second in the final conference team standings with 16 points – 3.5 points behind Packerland champion Oconto – while the Eagles came in fourth with 12 points.