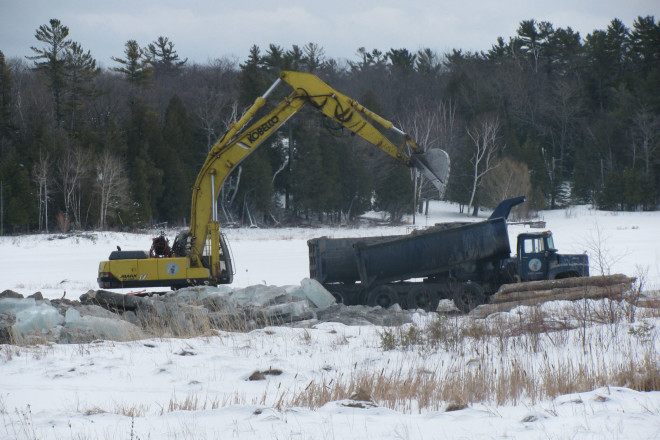 The Door County maritime community grinds to a wintery halt save the few hearty souls that shore up ships, break icy water routes and haul gill nets laden with fish. In order for much of this activity to go on, a small but hardened labor force works to dredge channels, boat basins and harbors, from the shoreline and on the frozen waters of Door County. 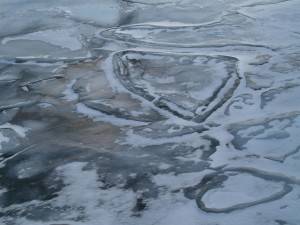 When most companies are looking to lay-up their equipment for the season, Death’s Door Marine of Ellison Bay, owned and operated by Mike Kahr, is getting into full swing. Kahr’s small crews of three to five men work year round to ensure deep water access for Door County’s boaters and mariners. Working off the ice is a task achieved only with the utmost precaution according to Kahr.

A recent winter scene finds the Death’s Door crew on Ephraim ice in Eagle Harbor. Fog covers much of the frozen seascape and the mechanized digging is the only sign of life in this village’s late winter afternoon. Dredging a channel for summer boaters, a large dump truck sits offshore on ice only a couple of feet thick. Beside the truck is an enormous crane. Dredge material consisting of rock and dirt is being scooped from a watery hole in front of the crane. Water streams continually from the bucket and flows back to the icy surface to freeze up once again. Boulders and debris are lifted and dropped into the truck’s bed with a crash. The truck and crane shake as the load is dropped.

The scene provides perspective of the typical questions from Door County visitors:  “Is it safe to walk on the ice?” and “Do people really drive out there?” In comparison to the large equipment laden with rock and dirt just off the Ephraim shoreline the questions seem superfluous. The concerns, however, are taken from cautious self preservation and are the same ones Kahr addresses each day before he enters this arena of dredging from a frozen platform. To safely work on the ice, thickness needs to exceed two feet and anything above this is Mother Nature’s gift to crew and equipment.

Looking at Mike Kahr and the burly crew that makes up his winter dredging workforce, one would think they go out as mavericks trusting fate and experiences. For Kahr, it is a much more calculated event. He understands the loads he is placing on the ice with his machinery and he is continually testing and measuring the ice against the weight of the machinery.

To determine ice thickness he drills holes with an auger. If the ice is too thin he will build it up or, quite literally, make ice with pumps that draw water from a hole and then disperse it back on top of the ice where his crew is working. Ironically, the cold surface snow sitting on top of the ice insulates it, and must be removed in order to begin the buildup of a safe icy offshore platform.

So why endure all the cold and wet work that exists to continue dredging in the raw winter months on the peninsula? The number one reason Kahr cites is the limitations enforced upon him through the Wisconsin Department of Natural Resources (DNR). These dredging restrictions center on fish spawning along Door County’s shoreline. The fish spawning season runs from March 15th to July 1st. Carrie Webb, Door County’s Water Management Specialist for the DNR, says that there is a “concern that the dredging will cover up fish eggs, making them helpless to reproduce.” She did add, however, “that if a fish biologist views the area and finds that the dredging operation will not impede fish spawning, then there may be an exem 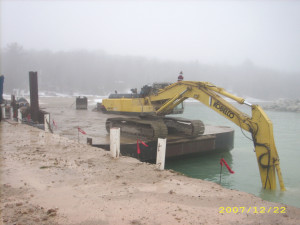 ption on either end of the fish spawning window.”

Kahr can be frustrated at times as he works to balance customer’s deadlines and DNR restrictions. He wishes there was more flexibility in the process. “If the temperature is too cold, fish won’t spawn; if it’s bad for fish, it’s bad for me,” he said. The main reason for this is that dredge material freezes in the boxes of his dump trucks. Recently, his crew moved 50 tons of ice to get his barge into a dredging area for a spring project. But warm weather also poses a problem. “One 50 degree day destroys the ice to the point of not being able to safely operate,” he said, adding, “Sunny days are the worst.”

Kahr’s working limitations within a calendar year become obvious. Municipalities require their docks, harbors and channels to be dredged in time for the county’s boating season. Owners of private marinas and docks also want their dredging complete in time to enjoy a short northern climate boating season. Utilizing an 80-foot barge that he designed and built himself, Kahr pushes into the warmer weather months to keep up with the workload. The barge is a huge working platform that holds cranes, equipment and dredge spoils. Although this workhorse of a platform sees many miles and hours of use in the summer, late winter and spring months remain salient to his schedule.

The need for dredging has existed far into Door County’s maritime past as ships required dockside service to load and unload their freight with greater ease. As technology and commerce increased, so did the dredging or digging of the shorelines and bays. Water fluctuations have kept marine construction companies busy for years with either dredging or, ironically, building up docks to keep high water contained. Record high water levels occurred in the 1980s that sent Door County residents running for sandbags and rip rap to handle the rising water level. Paul Burton, an Ephraim resident and author of Door County’s Islands, cited no less than eight Door County islands that were either underwater in 1986 or barely emergent in that year.

Record high water levels are rare, historically caused by ample snow and rainfall. The snow and ice pack that sits on the northern shore of Lake Superior is a key player in Lake Michigan and Lake Huron’s water levels. These latter lakes are considered to be one lake in a hydrographical sense, as they have no locks or dams separating them. Lakes Huron and Michigan are replenished during the early summer months as melt water returns to these mammoth fresh water holdings from Lake Superior. Yet the region is vast and historical data suggests that one lake level can and will fluctuate somewhat independently based on storms around a particular lake’s watershed or shoreline. Localized rainfall is still enough to raise lake levels for the short term.

Unlike our oceans, it appears that high water levels are the least of our worries as residents and keepers of the Great Lakes. The continual dredging of the St. Clair River between Lake Huron and Lake Erie, the creation of the St. Lawrence Seaway and its locks, as well as the reversal of the Chicago River have all acted as a siphon effect to drain our fresh water resources to the ocean. If levels were to return to 1980s levels of another 16 inches of water, many yards, docks and occasionally roads would be awash once again. 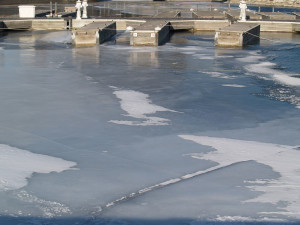 A need for dredging in Door County will undoubtedly increase rather than decrease. Dredging these shorelines is expensive, arduous and over the long term the need looks to be ongoing. The most significant and impressive example of a dredging requirement is the Sturgeon Bay Ship Canal which acts as a line of demarcation dividing the peninsula into southern and northern Door County. The canal was finished in 1882 in an effort to cut time between port cities and aid Sturgeon Bay’s shipping industry by allowing passage between Lake Michigan and Green Bay. Before the dredging and digging of the canal, ships and boats would have to go around the top of the Door Peninsula and extend their routes by hours and even days in the era of sailing schooners. In 1893, the Federal Government purchased the canal, giving the U.S. Corps of Engineers the authority to maintain water depth ensuring safe and efficient shipping passage. Maintaining water depth has been an ongoing process for this and most man-made dredging projects.

Roen Salvage Company of Sturgeon Bay maintains water depths in the canal through a rigorous schedule. When asked how much of their dredging operations are executed in the winter, Roen’s General Manager Thomas Drager stated, “None. We dredge 24 hours a day, seven days a week to avoid dredging in the winter. Drager says they spend a good part of the winter repairing equipment that incurred damage of wear and tear due to the season’s dredging.” The harshness of a Door County winter climate drives most maritime related firms to overtime, before the ice sets in.

Though the Door Peninsula boasts proud shores with deep water, access to many pier heads, docks and boat ramps still requires maintenance dredging. According to a recent Department of Natural Resources study, however, if every municipality and owner of shoreline property chose to carve out a channel for their recreational boating purpose, the effects would be devastating. The study, which parlayed the expertise of the Wisconsin DNR and Lawrence University, assessed the impacts of dredging along the Door County shoreline. This environmental analysis required a one-year moratorium on dredging permits in order to allow biologists time to conduct research. Not surprisingly, the study concluded that no dredging would be the most favorable option if the main consideration was ecological sustainability of our peninsula. The study, however, included cultural considerations as well. These include standards of public interest that support the interaction between the human element and the fish, flora and fauna impacted at the water’s edge.

Our interaction with our shorelines is what gives us an appreciation for these ecosystems. Eventually, it also drives us to be part of this watery world with our watercraft and the need for docking and launching boats. Mandating a balance and ensuring that the public treads lightly on these shores is the job of the DNR. Maintaining d 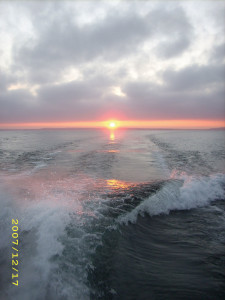 eep water access remains the job of people like Mike Kahr and his Death’s Door Construction company. In response to a minimal impact approach to shoreline access, Kahr, a Licensed Civil Engineer with a Civil Engineering Degree from UW- Madison, has designed what he calls an “alternate dock scenario” for a Northern Door property owner. The dock requires no permits from the DNR and allows permanent water flow through and under the structure. Kahr designed it to get around the DNR’s dredging rule. He said, “It’s not cheap but it won’t need to be moved out of the water when the season is done.” This design could replace portable piers that require annual removal to protect them from ice damage. The dock system also allows deep water access without dredging, eliminating the need for the costly maintenance of a channel.

The DNR suggests that private property owners use marinas rather than continue to dredge the ecosystems off their shores. Though riparian rights do exist for shoreline property owners, a continued awareness of the effects of dredging needs to be made if more and more permits are issued each year. For now, dredging our harbors and shorelines allows people greater access to the water. Fortunately, there are individuals like Mike Kahr who are willing to take on this arduous task throughout the winter, providing safe haven to boaters for each season.