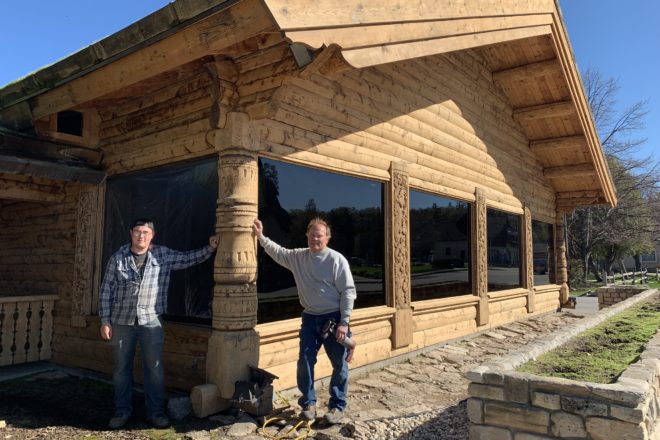 Jim Mineau (right) and his grandson Levi Mineau have been sandblasting the exterior of Al Johnson’s since April, revealing beautiful carvings and wood detail in the 56 year-old structure. Photo by Myles Dannhausen Jr.

On Deck isn’t the only business with new curb appeal in Sister Bay. Since April 9, Jim Mineau of Little Suamico and his grandson Levi have been busy taking a sandblaster to the walls of Al Johnson’s Swedish Restaurant. They have chipped away at more than four decades of stain, linseed oil and pine tar that had darkened the building to unveil wood-grain detail on the exterior and intricate carvings that even the most frequent Al’s guests might have overlooked.

Many of the carvings were done before the building was brought over from Norway in 1973, according to Rolf Johnson. Last year, Kjetil Groven, a Norwegian carver living in South Dakota, reproduced the style of those carvings for the posts of the retractable roof at Stabbur next door.

The building acquired its dark tone during its first several years, when Al Johnson enlisted the help of middle school and high school students for $5 an hour to coat the logs with linseed oil to protect the wood. With new coats during each of the first three years, Johnson said the exterior got progressively darker, and then a coat of a different stain made it so dark they couldn’t go back.

“When we did Stabbur, it looked so good that we thought it would be nice to do the whole restaurant,” Rolf Johnson said.

When Mineau finishes sandblasting the exterior, he’ll set about the tedious task of sanding every square inch of the building to set the stage for a new coat of lighter stain.

“The new stain will still be mostly transparent, but it will darken [the building] slightly to match Stabbur,” Mineau said.

The stain will protect the wood from ultraviolet rays, water and insects. Mineau has already put several hundred hours into cleaning the wood and expects to continue working well into June to finish the job.