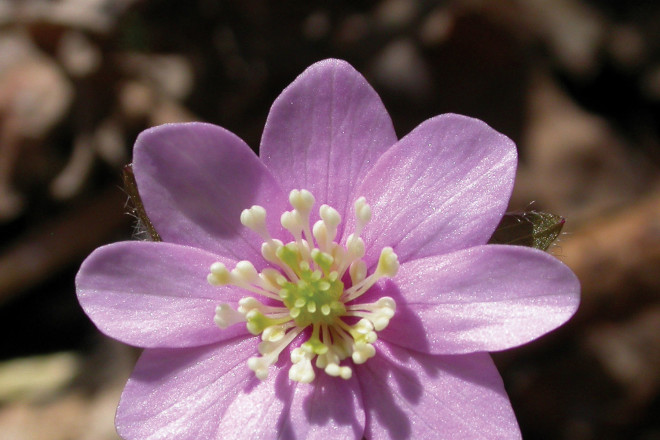 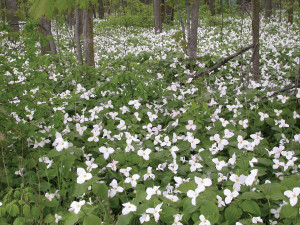 I began to learn and enjoy spring wildflowers in early childhood in one of my dad’s favorite woods bordering the Kewaunee River, close to his home farm near Slovan. These are still among my favorites today; included are the Hepatica, Trout Lily, Large-flowered Trillium, Bloodroot, Spring Beauty, Dutchman’s Breeches, several different violets and Wild Ginger. These and other wild plants don’t need humans to water, feed or mulch them, yet spring after spring they bloom to the delight of many people. However, these flowers will continue to exist only so long as we preserve the woods, step lightly, admire their beauty, and then leave.

The spring ephemeral wildflowers bloom for only a short time, often no more than a week for some species. They begin to flower before the thick canopy of deciduous tree leaves forms which produces dense shade, covering as much as 95 percent of the forest floor. Everyone who ventures into this “spring woods awakening” should do so as gently as possible, or, as one of our naturalist friends, Ray Schulenburg of the Morton Arboretum, pleaded with his students, “Put your feet down as rarely as possible!”

A great many of the spring ephemerals are reclusive and fragile. The exacting conditions they require for proper growth have, in many instances, been greatly reduced by human encroachment, too often in preoccupation with profit making. Sadly, we are stunned to see a sprawling development in a woodland which, as recently as the year before, was home to thousands of wildflowers and other native plants. Awareness, sensitivity and thoughtful conservation have to be brought to play in order to preserve our dwindling native wildflowers. 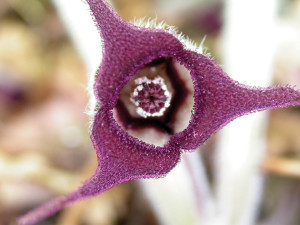 Many of our European ancestors who came to settle in America were so homesick that some wildflowers and other plants they found in their new country, which had at least some slight resemblance to plants they knew and loved so well in their native country, received those familiar names, many of which have remained. For example, a favorite wildflower of the wet borders of the spring woods my parents took us to were called Cowslips, a plant also called Marsh Marigold today. In recent years I learned that a very common yellow wild primrose of England was called “Cow’s Lips” (another white form of wild primrose was called “Ox Lips”). When these homesick settlers saw the swamps come alive in spring with yellow wildflowers, naturally they referred to them as their beloved “Cow’s Lips,” a name which quite easily was changed to Cowslips through the years.

Hepaticas break the winter dormancy in our woods every spring and, in some years, may begin to bloom before the end of March. Even though a common nickname for these lovely white, pink, blue or purple pastel-colored flowers is the Mayflower, many Door County woods have scores of these handsome plants in full flower before the end of April. Acutiloba, by far the most common species, sports acute or pointed leaf lobes, while the species Americana has round-lobed leaves, slightly smaller blossoms and tends to favor more acidic soil. For both, last year’s leathery three-parted leaves accompany this season’s blossoms. 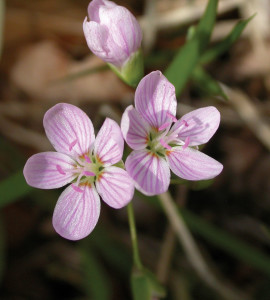 Close to bloom on the heels of the Hepatica is the Trout Lily, also called Yellow Dog-tooth Violet (it is definitely not a violet!), Fawn Lily, or Yellow Adder’s-tongue. Early naturalists observed these wild yellow lilies blooming in the woods when they went fishing for trout, hence the most commonly used name of Trout Lily today. From a small, elongated white bulb, resembling a dog’s tooth, as much as eight to twelve inches below the top of the soil, comes the lovely three or six-parted yellow lily. Nearly six or seven years are required, from the time a seed germinates, to produce a blossom. During the night and on dark overcast or rainy days the perianth (floral envelope) surrounding the all-important stamens and pistil uncurls and hangs downward, thereby protecting the important reproductive organs of the flower like a tiny umbrella.

To see a sunny spring woods in mid-May literally carpeted with thousands of Large-flowered Trilliums is an unforgettable sight. These indeed are precious woods in need of careful managing and preserving. A fascinating feature of trillium seeds, as well as several other wildflower species’ seeds, is that a part of each seed includes a fatty material, a lipid, called elaiosome (e-LIE-o-soam) which the ants and especially their larvae relish. After the seeds have been stripped of the elaiosome in the ants’ underground chambers the remaining undamaged seeds, along with dead ants, feces and other debris, is brought to the surface and placed on the ants’ “compost” pile. Here the seeds germinate considerably better than when they simply fall to the ground beneath the trillium plant. This so-called ant compost has been tested and found to be much like the inorganic 10-10-10 fertilizer used by many gardeners and farmers. 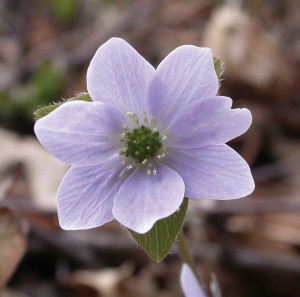 One of the most fragile among the earliest wildflowers is the Bloodroot whose eight white petals shine like little stars in the woods. Given the proper growing conditions, colonies of several hundred plants can be formed. Their finger-size root indeed appears to be quite blood-like when cut into. The beautiful large roundish leaves remain healthy and vigorous well into the late summer, long after the blossoms have disappeared, making and storing food as do other wildflowers so that they can spring forth with blossoms and leaves at the first sign of sunlight and warm soil the following year.

A great favorite of many people is the Dutchman’s Breeches whose flowers lack fragrance. Squirrel Corn, quite similar and a close relative, blossoms a week to ten days later and frequently exists in the same woods; it has wonderful fragrance and tiny white blossoms that resemble the blossoms on Bleeding Heart flowers so common in many gardens.

No spring ephemeral can match the Spring Beauty for virtually carpeting some mixed hardwoods in the county. A favorite place of ours to enjoy such an expanse, without even getting out of the car, is a small woodlot of an acre or so where cows and horses retreat in summer for a little shade and some water from a watering tank. Naturally, the ground becomes well fertilized and is literally covered with tens of thousands of Spring Beauties early each spring. There are two species of this wildflower growing in the state, the Virginia Spring Beauty (Claytonia virginica) having very narrow grass-like leaves, and the Carolina Spring Beauty (Claytonia caroliniana) having considerably shorter and wider leaves. The Virginia Spring Beauty is by far the most common and abundant in Door County. 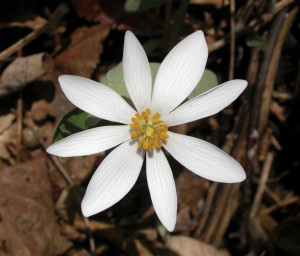 At least a dozen species of violets find their home in this region. This is a wonderful and challenging group of spring wildflowers to get to know. A few are quite special, such as the rare Long-spurred Violet which grows only in Wisconsin counties that border Lake Michigan. One of the most common, sometimes forming large patches in roadside ditches, is the Butterfly Violet, Viola papilionacea (pa-pil-e-o-NAY-see-uh). Its four bluish petals, collectively, resemble a small butterfly. One of the most abundant, tallest-growing and longest-lasting violets in the county is the Canada Violet. Gently turn the blossom over and you will marvel at the lovely pastel blue color on the undersides of its white petals. Some of the violets, much like a number of the spring ephemerals, are fussy as to where they grow. A favorite violet of ours is the tiny Sweet White Violet, Viola pallens, which favors cold wet springs and brooks and is mostly northward in its distribution. Its leaves are round and its tiny white petals are strongly marked with vivid purple lines, excellent guides for insects searching for the plant’s nectar.

Work diligently to make your wildflower hikes family events and learn to understand and love the delicately unfolding wildflower drama in the spring woods. Step lightly, admire these plants’ exquisite beauty and leave these precious woods with more determination than ever to preserve these natural shrines for future generations to enjoy. May you revel in the rich mosaic of the spring woods carpet.