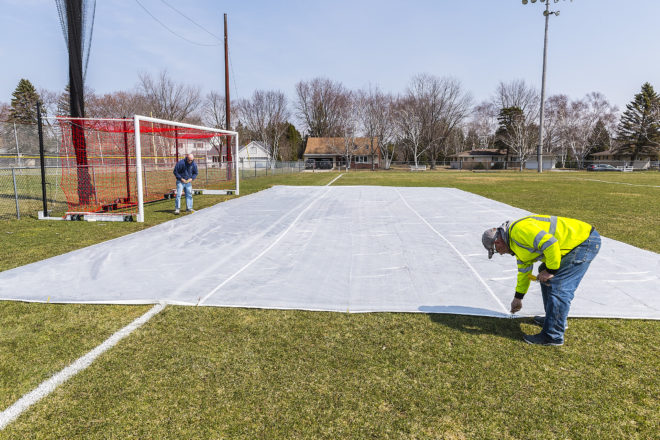 “It can’t get any worse than last spring, when seasons were basically cut in half due to inclement weather,” he said, referring to the 30 inches of snow dumped on the area in mid-April. “Everything was going smoothly until [recently], when we were hit by the snowstorm. Unlike some neighboring schools, our softball, baseball and track teams had gotten in all of their regularly scheduled games and meets through the first two weeks or so of the season. The temperatures weren’t ideal, but the fields were playable.”

“I’m glad I was broken in [to the AD job] because rescheduling was what I did for a few years,” said Gibraltar AD Peggy Tanck, who served as the department’s administrator before assuming her present role. “It’s like putting a puzzle together. Sometimes the pieces fit, and sometimes they don’t. I just ask people to be patient.”

“Our fields were not ready for any games to be played at Memorial or PBI Field,” Meikle said. “When this happens, all the ADs work together to figure out a plan to try to get these early games in. It’s extra work, but it’s done for our kids so they have an opportunity to play.”

“I don’t care where we play as long as it is safe for the kids,” he added.

Berns said last season’s spring snowfall didn’t compare to what he calls the “Monsoon of 1996.” Coaching Sevastopol, Berns said the Pioneers were obliged to play nine games in nine days due to rainouts. Sturgeon Bay coach Sam Andrae was saddled with 11 games in 13 days.

These kinds of packed schedules provide another challenge for baseball coaches. As games begin to accumulate, pitching depth can be stretched.

“I have experience in playing an abnormal number of games in a short period of time,” Berns said. “As doubleheaders stack up, the number one thing is arm health. The kids’ health always comes first. I am blessed to have pitching depth this year, so we might be better prepared. We have four guys who are varsity caliber.”

Sturgeon Bay soccer coach Bob Desotelle said his team managed to play its first four scheduled games despite tough field conditions. That team is one of many using the gym as an alternative to outside fields, making training much more difficult.

“Being prepared to play on grass and a full field is impossible to replicate when practicing in a gym, and made even more complicated when numerous sports are using the gyms daily,” Desotelle said. “At Sturgeon Bay, coaches have worked together to maximize gym space, cooperated to share space and support other sports in our efforts to prepare our squads for competition. Even our athletes support each other. Usually by the end of April, we are fully ready to begin [the] season. In northeastern Wisconsin, it’s just our reality. We make do and persevere.”

Berns added some comic relief when asked if a coach can ever become fully accustomed to the fickle spring weather.

“It’s a resounding yes as long as you have two very good pairs of long underwear,” Berns quipped. “I can tell you that I definitely do.”