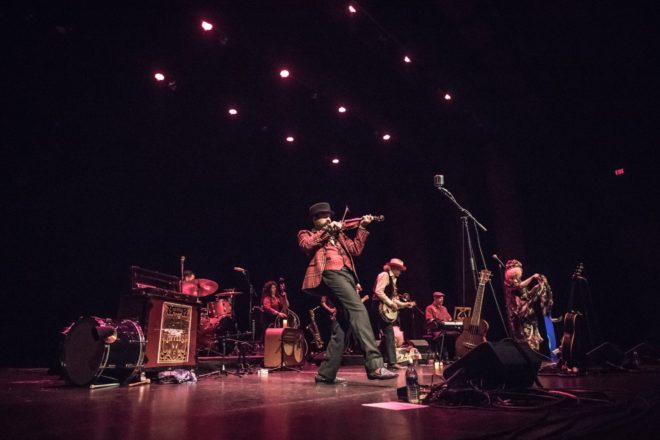 Opener Sierra Ferrell rips a hole in your heart

Do you know how to spell the word “fun” in 18 letters? Squirrel Nut Zippers.

The band plastered smiles on the faces of many members of the Aug. 11 audience for the Zippers at Door Community Auditorium. This nine-piece band is a revival of the original group founded in Chapel Hill, N.C., in 1993. The only constant is founding member Jimbo Mathus, singer/guitarist/banjoist and bad joke teller (he’s charming despite the bad jokes).

With a penchant for hot jazz and antic choreography (especially as performed by high-kicking, sparkly-shod fiddler Dr. Sick), the Zippers know how to make a good time happen.

The band is touring in support of its first studio album in 18 years, Beasts of Burgundy, which includes the fabulously retro “West of Zanzibar,” which, performed live, sounds like its right out of a late 1940s film noir. They also played the rousing, Gene Krupa-like drum heavy “Axman Jazz (Don’t Scare Me Papa)” from the new record.

The evening ended with the entire band – led by Dr. Sicko on bass drum – through the auditorium and out to the lobby and merchandise area where folks could buy Zipper music and assorted paraphernalia.

The evening began with singer/songwriter Sierra Ferrell, who came on stage looking something like Sir John Tenniel’s drawings of Alice for Lewis Carrol’s Alice in Wonderland books come to life, strapped into an acoustic guitar half as big as her. She then proceeded to win the hearts and minds of the room with her soulful voice and and masterful interplay with that rich voice and her guitar.

In that emotion-filled voice you can hear June Carter Cash, Tammy Wynette, Loretta Lynn, Skeeter Davis. She walks among the great country honky-tonk torch singers. I lost track of how many times she broke my heart with her songs.

She had sold out of her music so had nothing to sell at the DCA show, but rumor is that a major label is interested in releasing her next record. Do yourself a favor and look for it when it hits the streets, and if you ever have a chance to catch her live, don’t miss it.