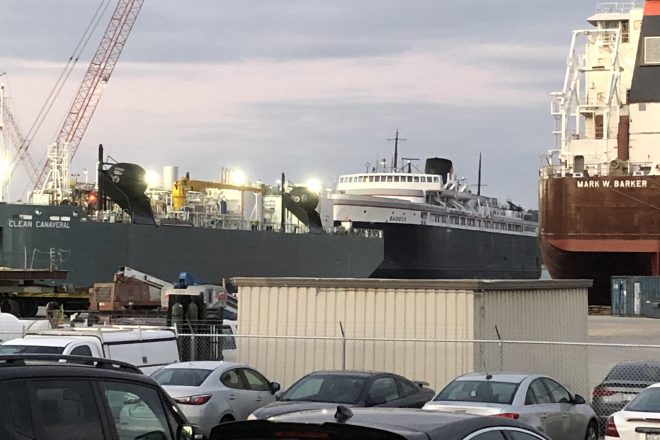 This month, the 69-year-old SS Badger arrived for maintenance and inspection in Sturgeon Bay, where it was built. The nation’s last large coal-burning steamship is in dry dock next to the Clean Canaveral, a barge that hauls liquefied natural gas. Photo by Craig Sterrett.

The arrival of the SS Badger in Sturgeon Bay this month for routine maintenance drew onlookers to the ship canal and lured photographers to various vantage points as the ship passed between piers of lift bridges.

Facebook came alive with comments from residents and tourists, some posting photos of the ship passing under Sturgeon Bay’s lifted bridge spans, taken from atop the new Maritime Lighthouse Tower. A Peninsula Pulse post of an aerial photo circa 1952 of the Badger and Spartan under construction at the shipyards stirred numerous memories, such as Betty Holland telling her kids that’s where their dad worked during the early 1950s.

Why the fanfare in Door County?

The 410-foot Badger is the last coal-burning steamship in the United States and has always received a little more attention than its peers, which are no longer sailing. The National Park Service gave the ship National Landmark status in 2016. The Badger almost stopped sailing a few years ago because Lake Michigan Carferry Service had not disabled its system that steadily dumped coal ash into Lake Michigan. The new system, installed in 2015, transports coal ash from the ship’s four boilers to four retention bins on the car deck, according to the U.S. Environmental Protection Agency.

The Badger had a slightly more ceremonial send-off than its sister ship. Egg Harbor resident Richard Dannhausen said he was 7 years old when his family attended the christening of the ships, and his family was invited aboard for tours and a dinner celebration on deck.

The Badger also made a bigger splash on its launch day, Sept. 6, 1952. Launched into the water northward toward railroad tracks and buildings at the shipyard, the chain reaction triggered by the launch – now dubbed “The Big Splash” in history exhibits – caused significant damage.

Those preparing for the launch tried to prevent damage by putting a bunch of railroad cars in the yard with metal plates on the bottom at the wheels so the tidal wave wouldn’t hurt the buildings, recalled Rich Hanneman, 92, who had worked in the naval architecture office of R.A. Stearn at the shipyard.

“All the engines and everything were in the Badger when they launched it,” said the Sturgeon Bay resident. “It was very heavy, and it made a tidal wave that turned all the rail cars over, and they knocked the pipe shop [building] out of line.”

Hanneman donated some of his drawings for inclusion in the Badger’s onboard museum.

“About eight or 10 years ago, my daughter called the people at the Badger and said I had some drawings to give them,” he said. “They gave us a free dinner and trip over to Ludington and back. My son still has a drawing of the aft casting, and the rest of the drawings I gave to the captain on the ship. I stood at the wheel and steered her a little bit going out of Manitowoc.”

Thomas Ahrens grew up near the shipyards near 3rd and Delaware in Sturgeon Bay and has never lost his fascination with the place. He was excited to see photos of the Badger’s arrival and old photos of the shipyards where he and his friends used to sneak in to fish for pike from the greasy railroad turntable.

He was only 5 years old when the Badger and Spartan launched, but he has fond memories of swimming at the Sunset Park beach and playing in big waves when another large ferry, the SS Ann Arbor, passed through on its way to Marinette.

The Ann Arbor Railroad used its ferry for rail cars, just as the Chesapeake & Ohio Railroad primarily used the Badger between Ludington and Manitowoc, and the Spartan for ports including Kewaunee.

Ahrens said he’s ridden the Badger several times, the past few years with a motorcycle group.

Motorcyclists see more of the ship than automobile drivers. Badger staff members park cars and back semis onto the ferry deck, but staff members don’t handle the motorcycles, Ahrens said.

“We ride our bikes on and strap them down so they’re secure. You go across grating, and you can see where the old railroad tracks are kind of paved over. It’s tight quarters, kind of neat,” he said.