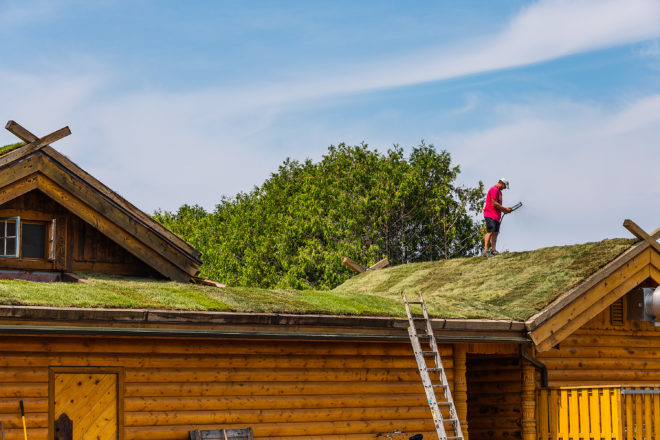 On any given day during the growing season in Door County, Jason Orsted can be found laying sod in conjunction with his job as owner and operator of his landscaping company, Creations by Jason in Baileys Harbor.

But unlike most of his jobs, in one of his latest assignments you’d have to look skyward in order to see Orsted at work.

That’s because Orsted has undertaken the task of setting up an irrigation system and laying sod atop the Stabbur Beer Garden at Al Johnson’s in Sister Bay.

“Everything on the roof is exactly the same as doing it on the ground,” Orsted said of laying the sod. “Same steps, same process it’s just you’re at an angle, that’s the only difference.”

This isn’t the first time Orsted’s job has taken him to unusual landscaping heights. He has also done some work on the roof at Al Johnson’s Swedish Restaurant (home of the iconic grazing goats) as well as on the smaller, original section of the Stabbur Beer Garden roof. That section is being re-sodded with a very important addition – an underground irrigation system. 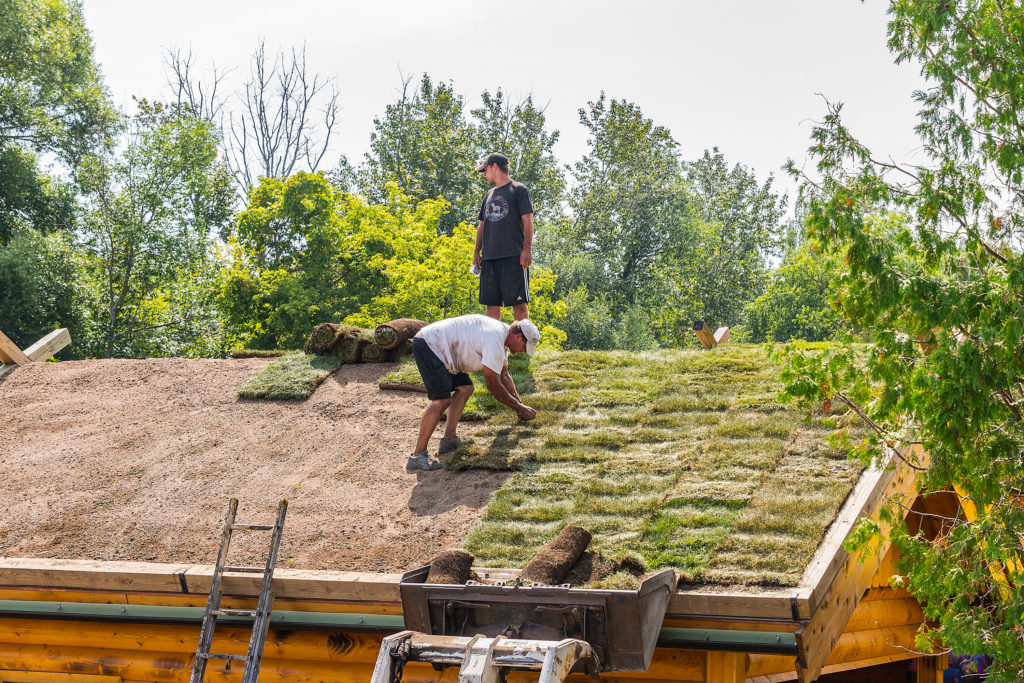 Jason Orsted and crew toiled in the August heat to lay down new sod on the Stabbur roof. Photo by Len Villano.

Orsted worked with Rolf Johnson, co-owner of Al Johnson’s, to develop the underground system for the Stabbur roof. Unlike on the main building, which has an above-ground sprinkler system, Orsted and Johnson had to come up with a system that wouldn’t literally dampen the spirits of the diners, drinkers and revelers at the outside beer garden. “The people don’t want to get wet,” Orsted said.

So Orsted put water lines up through the roof, and installed an irrigation system with a drip line hose that lays under the sod by three to four inches. “Every 12-inches there’s an emitter and that emits the water, and it just drips and spreads out,” Orsted said. The water drips through the emitter, the soil wicks it up and any excess water drains through the soil and comes down a gutter system. Watering is set on a timer and will probably run once a day for an hour and a half.

Orsted is confident the system will work. “I know it will work, I’ve done it before,” he said of a similar, “ground level” system he installed at a residence. “I did it in a customer’s yard who didn’t want sprinkler heads to get their sidewalks wet, getting their house wet, and it works perfectly and their lawn is immaculate.” 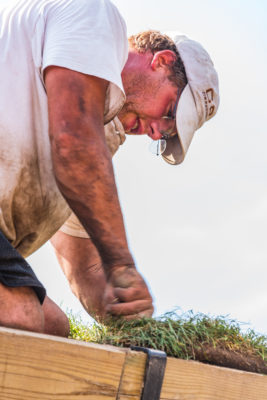 Jason Orsted hard at work on a dirty job. Photo by Len Villano.

And while the new roof should soon be lush and thick, there will be one other big difference from the grass-roofed restaurant next door:  no goats.

“Because the bar is open and outdoors, and there’s food and drink around, they can’t have goats up there,” Orsted said.

That also means there will be no goat grazing to help with keeping the grass trimmed and neat. “We’ll be up there with push mowers,” Orsted said. “Plus I think we’re just going to cut it for the first year and then I think we’re going to let it grow long.”

In the beginning, though, Orsted thinks his grass mowing will only have to take place twice a month. As for how long it will take him to perform his mowing duties, he said, “I don’t know. I haven’t done it yet.”

Orsted will also pull any weeds by hand, as fertilizers and chemicals can’t be used, both because of the proximity to food, as well as the probability that chemicals would break down the plastic in the system. But he doesn’t see weeds as a big problem. “Hopefully the weeds aren’t that bad. You put the grass on there and as long as you keep the grass at a certain height, provide shade and provide enough moisture to keep the ground wet it should be fine, and a thick lawn usually keeps the weeds out, for the most part,” Orsted said.

Orsted said he was extremely excited about doing this project. “It’s different,” he said. “Not that many people can say that they can sod a roof. It’s unique. And it’s going to look nice and match the rest of everything else…except no goats!” 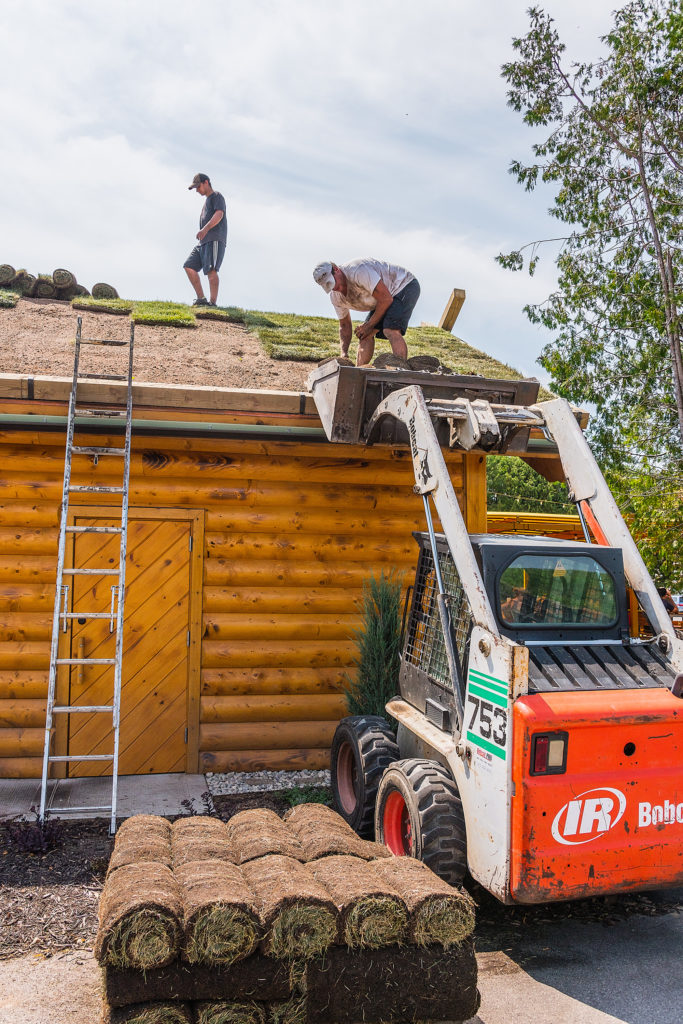 Orsted’s crew had to get creative to get all the dirt and sod in place on the roof. Photo by Len Villano.