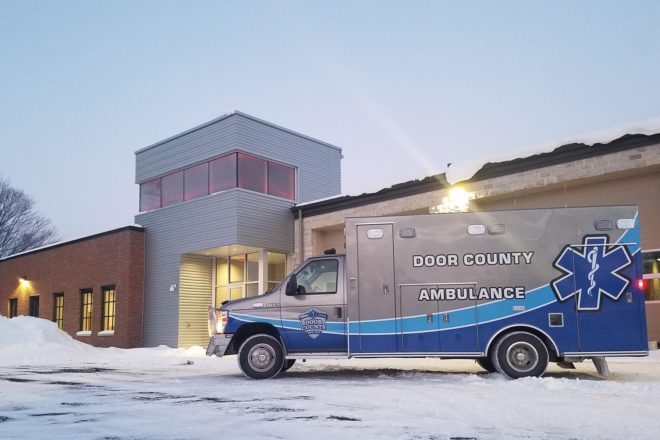 The County of Door’s 911 call center is located at the Door County Justice Center, 1205 S. Duluth Ave., in Sturgeon Bay.

Door County supervisors are recommending measures to avoid a critical threat to public safety posed by a staffing shortage at the county’s 911 call center.

The telecommunicators who answer 911 calls in Door County out of the call center located in Sturgeon Bay are responsible for setting in motion the entire emergency-response process. Since 2018, when Dan Kane took over the department as director of Door County Emergency Management and Communications, the call center has never been fully staffed, with levels fluctuating between “survivable and critical,” he said.

“This general trend, which is shared with nearly all dispatch centers across the country, is now paired with an extremely tight labor market and higher costs of living,” Kane said.

The positions face wage pressure from both the public and private sectors for jobs that don’t require weekends or nights. First shift is “fairly easy to fill,” Kane said, but the call center struggles to attract and retain employees for the second and third shifts.

“Overtime and night shift and weekends are not what they want out of their life,” Kane said.

“We have one [employee] in training looking for housing,” Kane said. “She’s struggling. She can’t find anything affordable. She wants to move here, but she can’t.”

Everything combines to put the department at its most critical level in five years: only six employees when nine or 10 are needed to handle the workload comfortably. There are also zero qualified applications in the pipeline and a three- to four-month training period when a new hire is made.

“This lift is simply too much to bear for our current staff,” Kane said.

He spoke Dec. 7 to a joint meeting of three county committees: Judiciary and Public Safety, Finance and Administrative.

“We called this special meeting because we’re at that critical level,” said Ken Pabich, county administrator.

Kane is working part time at the call center to fill the gap, and his communications supervisor is in full-time rotation to cover one of the holes. If Kane didn’t work some of the hours, the call center could fall below its minimum staffing requirement of two people per shift to one per shift.

“This would be a significant public-safety issue, both for the public if their 911 call cannot be answered, and for the agencies that we serve if they need help and we are too busy to assist,” Kane said.

He recommended a more competitive salary package, and the joint committee members approved a more attractive version for consideration by the full county board.

“We do not feel money solves everything, but it is a barrier, and we just lost two people to a neighboring county, and it was strictly wages,” Pabich said.

Regionally, Brown County has 10 open dispatcher positions, and Kewaunee County is beginning to staff up for a new jail, according to Pabich. Kewaunee County structures the position differently as a jailer/dispatcher, so the starting salary, Pabich said, is an hourly rate of $29.54.

“This proposal puts us in a more competitive spot,” he said. “That’s the context of why we’re recommending the pay grade and the dollar amount.”

Supervisor Alexis Heim Peter suggested the changes that increased the signing bonuses, vacation days and premium rates. That vote passed 11-3, with Dan Austad, Dave Enigl and Nancy Robillard dissenting. The final vote for the full package did pass unanimously, however, and it now goes to the full county board for consideration.

Staffing shortages are forcing other county departments to figure out ways to provide critical services with fewer people.

The County of Door had 36 vacant positions, according to the November/December 2022 report prepared by County of Door Human Resources. Of those, 15 were in the Health and Human Services department.

The step back that day was a resignation at the county’s Aging and Disability Resource Center (ADRC): a kitchen position that was “notoriously hard to fill,” he said.

“We can’t really do the operations that we’re doing over there with only two people in the kitchen,” Krebsbach said. “We need three people.”

At the ADRC, those kitchen positions deliver warm meals for dine in, pickup or home delivery. Cutting back on those options – eliminating the pickup option, for example – may be necessary.

“We surveyed our folks, and there are still a bunch anxious about coming inside to eat,” Krebsbach said. “But we are looking at it; it might come down to that if that’s what we have to do.”

In the meantime, it also means that management takes kitchen shifts at the ADRC. Elsewhere, managers are pitching in where they must for the county’s largest department.

“There isn’t one area where we’re fully staffed,” Krebsbach said. “We’re really struggling. The staff is doing the best they can to keep their head above water.”

The strength of the emergency-response process relies heavily on a consistent, highly trained 911 workforce, according to the National Conference of State Legislators (NCSL). However, ongoing demands of being a 911 telecommunicator have made it difficult for call centers across the country to recruit and retain employees.

This shortage has inspired the creation of state and federal legislation to bolster the profession through reclassification. Dispatchers are currently classified as “office and administrative support” by the federal government. A reclassification as emergency first responders or as public-safety employees would “better reflect the central role dispatchers play in public safety, and aid in recruiting and retaining staff due to more accurate expectations of the role and increased benefits that may emerge under a new classification,” according to the NCSL.

Kane referenced these legislative efforts for reclassification as a way for potential applicants to see the position not as an entry-level job or stepping stone to something else, but rather, as a career.

A higher compensation package that’s heading to the Door County Board of Supervisors will also help, he said.