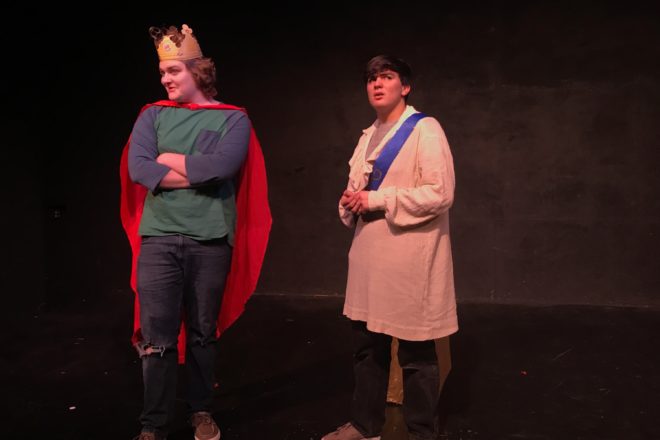 If you love the 17th century poet, playwright and actor hailed as “not of an age, but for all time,” you will love the play a group of Door County students are bringing to the stage at Third Avenue Playhouse this weekend. And if you are not a fan of The Bard’s elaborate metaphors and rhetorical language, you will also enjoy large swaths of StageKids’ production of The Complete Works of William Shakespeare (Abridged).

Created in 1987 by the founding members of the Reduced Shakespeare Company – an American acting troupe that performs fast-paced, slightly improvised and condensed presentations of significant topics, like America and God – the play parodies the works of Shakespeare by performing them all in comically shortened or merged form. During one performance, the play set a world record for shortest-ever performance (43 seconds) of Hamlet, Shakespeare’s longest play.

Typically in the show, just three actors portray the characters in all of Shakespeare’s plays. But in the local StageKids version, those dozens of roles are sparsed out among eight middle and high school students from Sturgeon Bay and Southern Door schools. 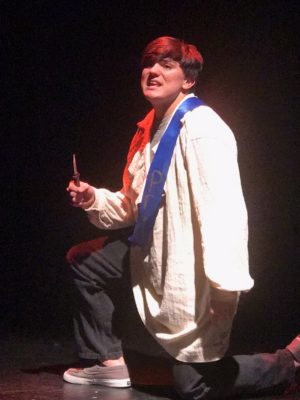 Matthew Martinez-Garcia gets into character during a dress rehearsal for this weekend’s show. Submitted.

The Complete Works of William Shakespeare (Abridged) is actually a play within a play. When the production opens, the characters – slightly dramatized versions of the real life cast – announce their goal.

“We’re going to try to pull off the feat of doing the complete works of Shakespeare in this one show,” director Alex Genty-Waksberg explained. “The goal is to put on all of the plays in this very short amount of time.”

The show opens with a performance of Romeo and Juliet, Shakespeare’s tragedy about two star-crossed, young lovers, and ends with Hamlet, pitting nephew against uncle in a ghost-fueled tragedy. In between are several rapid-fire deliveries of Shakespeare’s remaining plays and sonnets, presented in hilarious, witty and modern forms.

Titus Andronicus takes shape as a cooking show. Othello becomes a rap. And the fourth wall – the space that exists between performer and audience – ceases to exist. The pace of the play has demanded a lot from its young performers, some of whom are being introduced to Shakespeare for the first time through the script. For high schoolers who have studied his works before, the play has given new insights on the playwright’s intentions.

“I read Romeo and Juliet a few years back and Hamlet and Twelfth Night just this year but when I read things for the first time, it makes sense and it’s kind of enjoyable but I don’t really feel like how I do when I read other books,” said seventh-grader Anabelle Clark. “I can feel basically what the characters are but in this play when you’re acting it out, I can almost feel what Shakespeare was trying to convey in these stories.”

Genty-Waksberg assures diehard Shakespeare fans that the show is as much a madcap experiment on The Bard’s works as it is a tribute to the playwright.

“It’s funny and it’s riffing on Shakespeare but it’s also an ode to Shakespeare and there’s definitely a lot of love there,” Genty-Waksberg said. “There’s a monologue that’s played straight that’s supposed to be a good Shakespearean monologue but for the most part it’s all broad comedy. If you see the show, you’ll learn so much about Shakespeare. You’ll learn all the different plays and what they’re about and how it works, but in a funny way.”

The Complete Works of William Shakespeare (Abridged) will be performed at 7:30pm on March 9-10, and 2pm on March 11 at Third Avenue Playhouse in Sturgeon Bay.