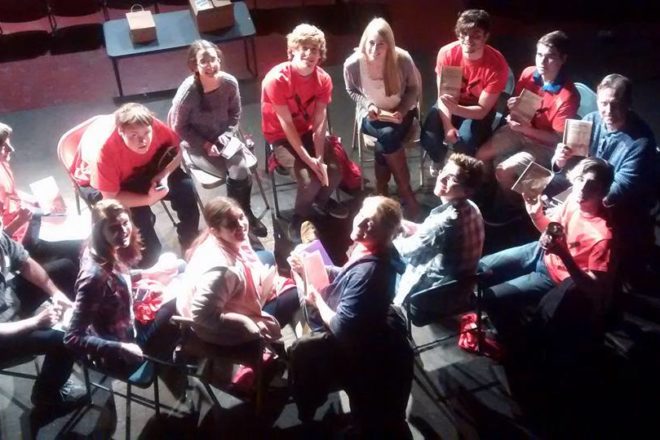 The cast of “The Laramie Project” at Third Avenue Playhouse. Photo by Amy Ensign.

On Oct. 7, 1998, openly gay University of Wyoming student Matthew Shepard was brutally attacked and left for dead in a field outside of Laramie, Wyoming. Five days later, he succumbed to his injuries in a Fort Collins, Colorado hospital.

The incident sparked immediate national and international debate about hate crimes toward the gay community, leading to an activist movement that would result in the passage of the Matthew Shepard and James Byrd Jr. Hate Crimes Prevention Act, a federal law that expanded the 1969 federal hate-crime law to include crimes directed at people for their gender, sexual orientation, gender identity or disability.

While media descended upon the small Wyoming town in the weeks after the murder, members of New York’s Tectonic Theater Project set out to conduct their own interviews with the town’s residents. Those interviews, combined with news reports and the theater member’s own journals, became the 2000 play The Laramie Project, one of the most widely produced theater pieces in the country.

This weekend, local high school students with StageKids Theatre will bring the production to Third Avenue Playhouse. In a time of unprecedented equal rights for the gay community, reading the script was a history lesson for the cast, many of whom were not yet born when the attack happened.

“When I first heard about this, how it happened and why it happened, I was a little confused because why would people hurt someone because of how they want to love in life?” Megan Schaut questioned.

Even though Shepard’s sexual orientation was the springboard for the activism that resulted from the attack, The Laramie Project isn’t just about gay rights – it’s about the conversations that happened in a town suddenly thrown in America’s spotlight.

“You could say that before the hate crime in Laramie, Laramie was a town not too different from Sturgeon Bay. It had a strong sense of community…after the hate crime happened, it became sort of the picture child for hate across the country,” Isaiah Spetz said.

“That’s what the play explores,” director Bob Boles said. “The image that suddenly this town gets and we hear from all kinds of citizens that totally reject that or are appalled that this is how Laramie is seen around the world. It’s a portrait of a town in crisis, really, having its images of itself being upended and being coopted by others and having the population of the town having to question that part…The kids who did this came out of our community so what is our responsibility as a community?”

The cast portrays dozens of characters in the three-act play, all based on real residents of Laramie.

“This really heightens the voice of the people who never got to speak and I feel like that’s very important. Not only to see the people who are so for gay rights but also who don’t agree with gay rights,” student Kole Mallien said. “It’s good to see a balance and that’s what this play does.”

Jemma Benton starred in StageKids’ 2014 production of columbinus, based on the April 1999 shooting at Columbine High School, and said the audience reaction to that play encouraged her to audition for The Laramie Project.

“After being in columbinus and having the talkbacks afterwards, I saw how much it affected people so I was hoping that, after this show, it will have the same effect on people and it will open their minds and have people think in a different way,” Benton said.

Each Laramie Project performance will conclude with an audience talkback with the cast and director.

“They can start to realize, maybe this way I’ve been thinking isn’t as good as what I thought it was. I know it wasn’t this terrible way of thinking but maybe there’s something in the middle that could be better,” Ian Toyne said.

And what better way to start the conversation here than community theater?

“I think things are so censored nowadays and people worry so much about what can be said and what can’t be said and I think that’s the beauty of theater and of this show because nothing is censored,” Michaela Kraft said. “It allows the audience to make their own choice about what they think.”

The Laramie Project will be performed at 7:30pm on Friday, May 6 and Saturday, May 7 and at 2pm on Sunday, May 8. Tickets are $15 general admission and $10 for students. For more information or to purchase tickets, visit ThirdAvenuePlayhouse.com or call 920.743.1760. The show is not recommended for children 12 and under.