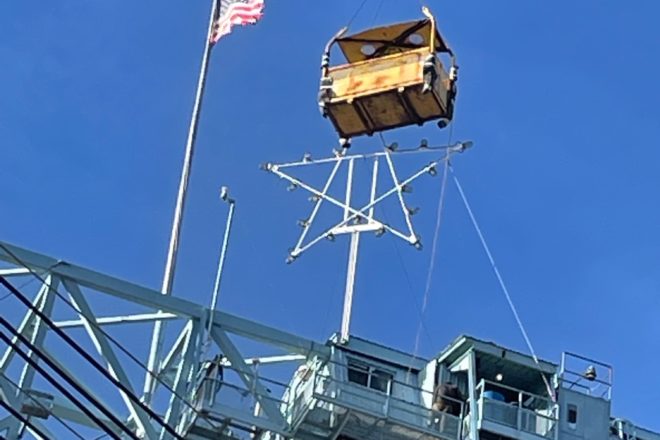 The star is hoisted into position in time for the holiday season. Photo by Doug Henderson.

‘Tis a sign of the holiday season when the star is hoisted into place atop the 166-foot tall Big Blue gantry at Fincantieri Bay Shipbuilding. It lights up the city skyline for all during the holiday season. For others, it lights up memories of Jack Bauer, the man who built the star 50 years ago.

“The majority of those I have spoken with remember it being 1971 and that a work order was created and given to Dad,” said Kelly Thornton of Sturgeon Bay. She’s one of Bauer’s eight children, four who still live within the city.

Bauer was a pipefitter, self-taught welder-fabricator, member of the Boilmakers Union #449, and a “smart guy and hard worker,” said Eugene Haines in a social media post. Haines worked with Bauer at Bay Shipbuilding. “I’m quite certain that he was tasked with that job and was hand-picked.”

Bauer retired from Bayship in 1982, but not from creating and fixing things with his hands. He opened Jack’s Repair, creating smaller versions of Big Blue’s star, one for the top of his garage. He passed away in October 2008, but his light continues to shine.