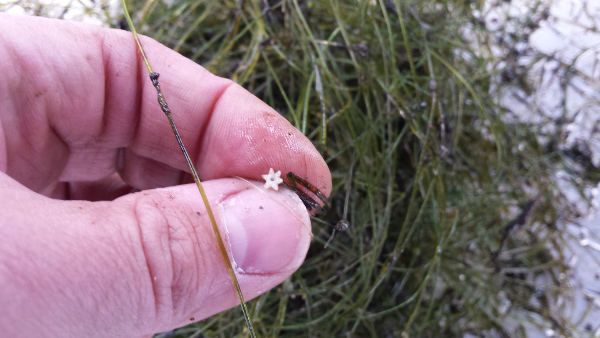 Starry stonewart (Nitellopsis Obtusa), a grassy algae not native to North America, has been found in the Sturgeon Bay Channel, which is believed to be its first appearance in Lake Michigan since first being discovered in New York in 1978. Photo courtesy of the Great Lakes Aquatic Nonindigenous Species Information System.

The recently announced discovery of the invasive starry stonewort in the Sturgeon Bay Ship Canal is more extensive than previously thought.

Bob Wakeman, the Wisconsin Department of Natural Resources aquatic invasive species coordinator for the state, said after starry stonewort was found by a consultant hired by the City of Sturgeon Bay to do an aquatic plant survey, the DNR conducted its own survey of surrounding waters and confirmed the consultant’s find in the canal, but they also found it in other places around Sturgeon Bay and in the bay itself.

“We’ll continue to survey the shoreline and see where else it might be,” he said, adding that it appears starry stonewort is not a newcomer to the area, but has been in place for at least a couple of years. Previous to the recent find in Door County, starry stonewort had been found only in six southeastern lakes in Wisconsin.

“We’re kind of lucky in a way that starry stonewort has been found in states previous to ours, Michigan and Indiana, mainly. We’re learning from them,” Wakeman said. “We’re still trying to find a good way to control it. I’m not sure we’re ever going to get rid of it. The real key is prevention. Once you get an aquatic invasive species, it’s difficult to get rid of it. It’s really critical that we take prevention steps.”

Starry stonewort has been found to be one of the fastest growing invasives in inland lakes, crowding out both native plants and other more established invasives such as Eurasian water milfoil.

“It kind of came on fast and furious, so we’ve been brainstorming on what we can do about this,” said Kari Hagenow, coordinator of the Door County Invasive Species Team, whose big concern now is keeping this invasive species out of the county’s inland lakes.

“Unfortunately, this is not the first, invasive species in Lake Michigan that we don’t have in our inland lakes,” she said, citing the spiny water flea as an example.

Hagenow said she is working to find a specialist on starry stonewort to come to the area and talk about this invasive in a public forum in the next couple of weeks. She will also be talking to inland lake associations so they are aware and don’t spread the species themselves.

“We work in the realm of education and prevention, and that’s the best thing you can do for this, telling people how to clean their boats and making them aware they are boating in waters that has these species,” she said. “This is a major thing. These people may be boating on the Wisconsin River or the Chain of Lakes. This species is so limited in the state, we could become a super-spreader pretty quick. It spreads by small plant parts that easily fall off and float around. I have not seen an infestation, but I’ve heard that these can overtake a lake quickly.” 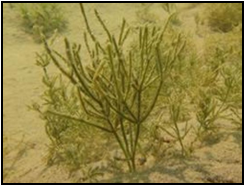 Hagenow also mentioned that her organization might put together a workshop for volunteers to man busy boat launches next season to help spread the word about starry stonewort and, hopefully, stop the invasive’s spread in the county.

“We try to target those busy launches in Sturgeon Bay to get people who might be going from those launches to our inland lakes,” she said. “One thing that happened pretty immediately here, we were going to try to seek some volunteers to work at those launches right away, but UW Sea Grant stepped up right away and said they would hire someone to be at the launches through October. That happened immediately, which is great knowing that they are seeing that as a real high priority.”

Tim Campbell, invasive species specialist with the UW Sea Grant Institute, said they have additional funding from a DNR contract to hire someone to man the Sturgeon Bay launches through the rest of the boating season, advising boaters to remove plants and mud from their boats and drain all water.

“This is a good response,” Campbell said. “It’s also one of those things boaters are supposed to do all the time. Every boater has the power to stop aquatic invasive species.”