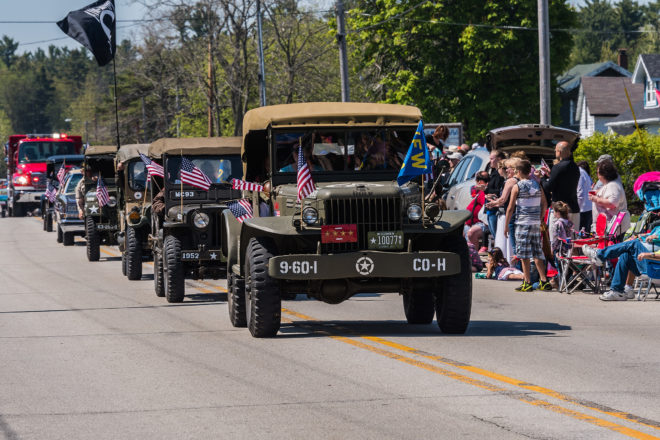 A weekend of fun is on tap in Jacksonport during Memorial Day weekend as the community prepares for the 46th annual Maifest celebration, May 26 & 27.

Since 1973, the lakeshore community has hosted Door County’s unofficial summer kick-off festival at Lakeside Park, located at the intersection of County V and Highway 57.

Event highlights include the grand parade at 10:30 am on Saturday, a juried arts and crafts fair beginning at 9 am both days, live music in the performance tent both days, the Maifest 10K and two-mile fun run/walk at 9 am on Sunday and the Frontier Farmers horse pull beginning at 1 pm on Sunday at the ballpark.

The popular Maifest parade begins its 46th running at 10:30 am on Saturday and will proceed through Jacksonport along Highway 57, from Cave Point Drive on the south end of town down past the Square Rigger Lodge on the north end of town. This year’s honorary parade marshals are Sue and Joe Jarosh, who have been actively involved in the Jacksonport community for 35 years.

On Sunday morning it’s time to lace up your running shoes for the 36th annual Maifest 10K (6.2 miles) and two-mile fun run/walk. The race starts at 9 am in Lakeside Park and takes runners and walkers through the woods and out to Clark Lake and back on scenic Lakeshore Road and Cave Point Drive. Race registration takes place on race day from 7-8:30 am at the concession stand in Lakeside Park. For more information visit jacksonport.org/maifest/.