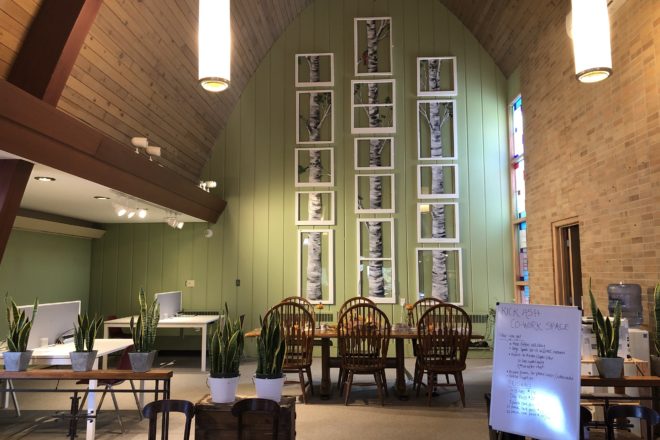 The co-working space at Kick Ash Coffee in Ellison Bay offers desks, a phone booth for calls, high-speed internet access and coffee included in the fee. Photo by Grace Johnson.

Last week the New York Times called digital exclusion a civil-rights issue. Specifically, “doing schoolwork in the parking lot is not a solution” was the opinion of its editorial board, and “an adequate connection is no longer a matter of convenience. It is a necessity for participating in a civil society.”

Too many people in Door County experience digital exclusion. Ask Carol and Christian Ash, who opened Kick Ash in Ellison Bay last year. Yes, it’s a coffeehouse where Kick Ash coffee and Door County Love granolas and other specialty retail and bakery items can be purchased and consumed. But Carol knew something else would be a draw.

“I knew that internet was a huge issue up here,” she said.

The Ashes’ business location is on the right side of the digital divide, with cable along Highway 42, so they installed some work desks, a large work table and a private phone-call room. Then they offered customers the opportunity to rent their high-speed and wired internet access in what they call their “co-work space.” It’s been a big success among those who work from home and need access to videoconferencing. Their seven spaces are regularly filled, and an additional office downstairs is rented out.

“The coolest thing I love seeing is people who get to come up with their families when normally they can’t because they can’t work here,” Ash said.

The shift to distance learning and remote working – and a new emphasis on telemedicine – have proven that high-speed broadband is a necessity, not a luxury.

“This is not just about watching Netflix,” said Missy Hughes, CEO and secretary of the Wisconsin Economic Development Corporation (WEDC). “This is about getting an education and doing your work.”

Last month, WEDC released a report titled “Wisconsin Tomorrow” that cited a “desperate and immediate need to provide accessible, affordable and quality broadband throughout Wisconsin.” Along with getting everybody back to work and supporting innovation, the report recommended that fixing broadband was one of three things the state needed to do to recover from the COVID-19 pandemic.

But digital inclusion won’t be easy when “broadband access is broken,” Hughes said. It will require developing resources that the state already has in place and methodically moving through those to get communities the expansion they need. It will also mean developing accurate maps of who does and does not have reliable internet access.

“As crazy as it sounds, we don’t yet have a good map of availability,” Hughes said. “That’s why we need to be doing this.”

“Regardless of how perfect the data is, we still know we have a large problem,” Hughes said. “We have to be operating on a parallel track on updating the gaps in our data and acting to fix the problems.”

Gov. Tony Evers announced one of those actions last week when he signed an executive order creating the Governor’s Task Force on Broadband Access. The objective is to expand high-speed internet access to every residence, business and institution in the state.

The task force will, specifically, prepare an annual report on the current state of broadband in Wisconsin; provide recommendations for policies and initiatives to overcome challenges to statewide access, affordability and adoption; and look for innovative solutions to bridge the divide.

Among them are representatives from the industry, such as Charter and AT&T.

“I’m excited because if you look at the [task force] group that’s been brought together, it clearly has a bias toward action and driving toward solutions and movement instead of just talking,” Hughes said.