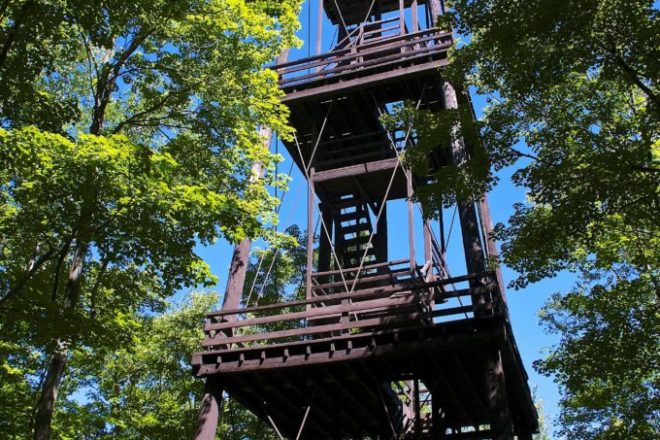 Rep. Joel Kitchens (R-Sturgeon Bay) and Sen. Robert Cowles (R-Green Bay) have sent a strong letter to the Wisconsin Department of Natural Resources (DNR) advocating in situ, or in place, repair of Potawatomi Tower rather than its destruction.

“After very careful consideration, and with the safety of park visitors at the forefront, we have reached the conclusion that repairing the tower in situ is the most prudent course of action for the DNR to follow,” wrote Kitchens, who chairs the Assembly Committee on the Environment; and Cowles, chair of the Senate Committee on Natural Resources and Energy.

The DNR closed the 75-foot tower to the public during the spring of 2018 because of decay in the structural and nonstructural wood. Earlier this year, the DNR decided it would have to demolish the timber structure because it could not make repairs to it without triggering accessibility requirements under the Americans with Disabilities Act (ADA).

After conferring with Legislative Council Senior Attorney Anna Henning, Kitchens and Cowles concluded that the repairs would preserve the facility’s existing condition rather than change its usability. In that case, ADA requirements would not be triggered.

“While we support the intent of the ADA and want to expand opportunities for our disabled citizens, we know that allowing full access in this case is impossible, and the alternative is the destruction of a structure that is invaluable from both an economic and historic standpoint,” the legislators wrote to DNR Secretary Preston Cole.

They also stated, “It is unconscionable that we would allow a vague and unwarranted threat of litigation to distract us from our duty to preserve this tower and pass it on to the generations that follow us.”

The 89-year-old tower is on its way to obtaining a listing as a historical structure. The Sturgeon Bay Historical Society Foundation (SBHSF) filed the official nomination for the State and National Registers of Historic Places on June 29. A preliminary opinion from the Wisconsin Historical Society that the tower may be eligible for the designations had already been rendered. Achieving that status would also trigger alternative standards for the tower’s repair.

“It is nearly certain to be approved,” the legislators wrote.

The SBHSF has been working to repair the tower, and its nomination application for listing the tower on the historic registers was its latest effort. Prior to that, the SBHSF commissioned a report from a timber expert who said the tower could be repaired in place for around $250,000.

The DNR and Department of Administration commissioned another report to assess the SBHSF report and found the repairs could be done, though it concluded they may be more extensive.

The legislators’ letter indicated that the repairs make sense from a budgetary standpoint and would also save an “iconic and beloved attraction that brings many visitors to the park.”

Christie Weber, SBHSF president, said her group was “totally thrilled” with the legislators’ letter of support and was hoping it meant the group could proceed with emergency repairs as soon as possible.

“Wouldn’t it be a great gift to all in Wisconsin, especially this year, to get these needed repairs done and have the tower reopen for families to enjoy the amazing view yet this fall?” she said.

Kitchens said Wednesday that his and Cowles’ respective committees work most closely with the DNR. He said the letter should have some effect on the agency, but ultimately it would be the DNR’s decision.

“When something is important, you have to fight,” he said. “You can’t just roll over. We’ll continue to press them on it.”