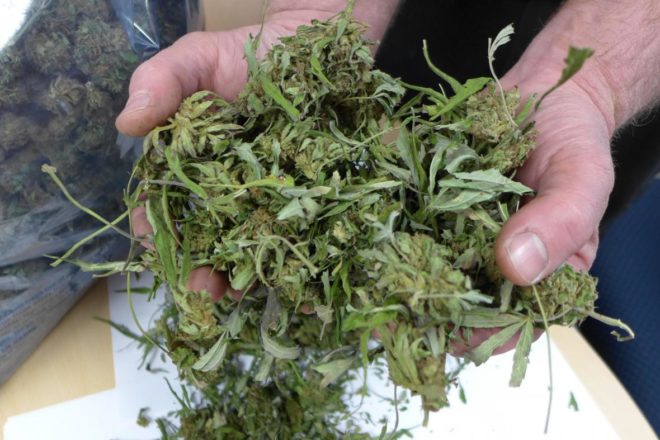 Last spring, LaVon Felton was all in when it came to industrial hemp. Felton owns car dealerships in Viroqua and an organic farm outside of town. In 2018, he had a contract to grow 48 acres of hemp grain for Legacy Hemp, a company growing hemp in North Dakota and Minnesota.

Even though hemp grain had never been grown in Wisconsin, Felton believed it could help farmers who are struggling with low prices for traditional commodities such as milk and corn.

“The dairy industry is not what it was for many reasons. And the tobacco industry, we lost that 10 years ago. So for me this is a way to find another cash crop – another way for the farmers in this area to … supplement their income,” Felton said.

Looking back now, he says the lack of information on how to grow hemp wasn’t his biggest obstacle. It was simply the persistent rains at the end of summer that impacted fields across the state.

“It just couldn’t get dried out. It just rained a lot. So when we did get it harvested, we came up with a good product. But it tested too high for mold spores in the grain,” Felton said.

Felton didn’t sell a single pound of the hemp grain he harvested in 2018. And neither did the roughly 20 other farmers who contracted with Legacy Hemp.

Between the seed, fertilizer, required testing and other expenses, Felton estimates the endeavor cost him at least $20,000.

But last year’s tough growing season for industrial hemp hasn’t deterred farmers from growing the new crop. The Wisconsin Department of Agriculture, Trade and Consumer Protection has issued more than 1,300 licenses to grow industrial hemp in 2019, a 22 percent increase from last year.

Felton wants farmers who are new to planting hemp to know they’re taking a risk.

“If we have a corn crop that doesn’t go well, or beans, we’re going to get something,” Felton said. “We’re going to be able to recoup some of our costs. Basically with this, if you lose it, you lose it all. You get nothing.”

Felton said he doesn’t think growing hemp grain will ever be profitable in Wisconsin because of the climate: The state doesn’t have the same arid summers as plains states such as North Dakota, where hemp grain has been grown since 2016.

And Legacy Hemp agronomist Bryan Parr said his company is starting to agree – especially if Wisconsin continues to see frequent heavy rain events at the end of summer. Parr said the state’s farmers have a much better shot at growing hemp fiber once that market becomes available. It’s the kind of hemp Wisconsin farmers grew during World Wars I and II, but Parr said there isn’t enough manufacturer demand yet in the United States.

Leaders from Great Lakes states and Canadian provinces will meet in Illinois next month to discuss a path forward to prevent the spread of Asian carp into the Great Lakes.

A binational and bipartisan group of Great Lakes leaders will discuss the U.S. Army Corps of Engineers’ roughly $831 million recommended plan at the Brandon Road Lock and Dam in Joliet, Illinois. The plan calls for additional defenses such as noisemakers and an electric barrier at a crucial choke point to help keep Asian carp out of the Great Lakes.

Leaders are expected to convene in Chicago sometime in mid-July. At a press conference, Gov. Tony Evers said they will analyze whether the plan is reasonable or other solutions can be implemented.

So far, Michigan is the only Great Lakes state to offer $8 million in financial support for the project. Michigan Gov. Gretchen Whitmer said leaders need to move swiftly on a solution.

No one is completely satisfied with action this week from the Republican-led Joint Finance Committee on proposed fees and additional positions to oversee concentrated animal feeding operations (CAFOs) in Wisconsin. The growing number of large farms in the state has contributed to increasing concerns over the potential for pollution.

Gov. Tony Evers’ budget proposal would have raised annual pollution permit fees from $345 to $660, as well as institute a new, $3,270 fee that would be paid every five years. Lawmakers rejected that proposal. However, they did approve four out of the five positions proposed for CAFO permitting, inspection and enforcement. They also approved transferring 9.5 positions to oversee large farms.

“For the amount of concentrated animal feeding operations that we have in this northeastern part of the state, we just need a lot more staff and oversight to actually fulfill what the DNR needs to be doing,” she said.

Utesch felt the fees the governor proposed for large dairy farms were “insignificant.”

As Wisconsin farmers struggle with a shortage of livestock feed and a delayed planting season, dairy groups in the state are calling on Congress to allow more flexibility under federal crop insurance this year.

Wisconsin and other Midwest states have seen historic delays in corn planting this spring due to continued wet weather. Many farmers missed the planting deadline for their fields to be fully covered by crop insurance, making them eligible for a prevented planting payment for unplanted fields.

Those producers could still plant a cover crop such as oats or sorghum on those acres that could be used as feed for livestock. That’s an appealing option for many dairy producers, given the current shortage of hay available for livestock across the state.

Stauffacher said the Nov. 1 rule is meant to keep producers from “double-dipping” – getting a payment and the financial benefit of forage – but he said it’s critical that farmers get an exception this year.