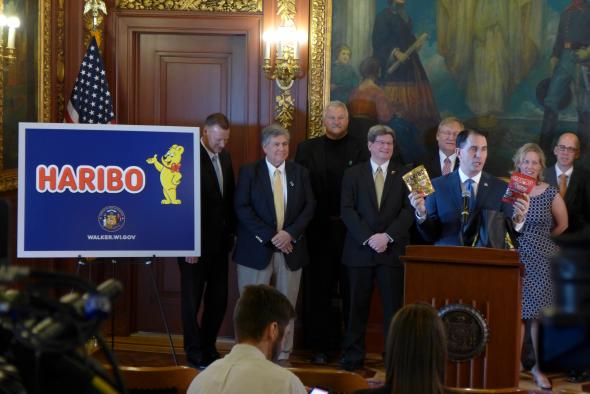 Gov. Scott Walker’s proposed budget would leave a “structural deficit” of about $1 billion, according to the nonpartisan Legislative Fiscal Bureau.

The Legislative Fiscal Bureau measures structural deficits by looking at how spending decisions in this budget will affect the next one. It found the structural deficit would go up to more than $1.05 billion by 2021, largely because Walker wants to increase spending beyond what current revenues can pay over the long term.

“If you’re just thinking short term, it’s not a big deal,” said Dale Knapp, research director for the Wisconsin Taxpayers Alliance. “If you start thinking a little bit longer term, it means that in the next budget, you might not be able to do everything that you want.”

“If you decide to carry a weapon to protect yourself or your family, you should be able to do so easily – without bureaucratic hurdles and without cost,” said Sen. David Craig, R-Town of Vernon, one of the bill’s sponsors.

Opponents of the bill say the proposed changes would compromise public safety.

“We don’t have a problem with the Second Amendment, but safety is our No. 1 concern,” said Jennifer Rosen-Heinz, a volunteer with the Wisconsin chapter of Moms Demand Action for Gun Sense in America. “This would just allow people more ways to carry without having to go through the safety permitting.”

Democratic lawmakers were quick to denounce the measure.

“Allowing anyone to carry a loaded, concealed firearm in public without any safety training or a simple background check is completely irresponsible,” said Senate Minority Leader Jennifer Shilling, D-La Crosse.

“I’m generally supportive of it and will monitor public support as we determine our next steps,” Vos said.

Lawmakers heard testimony Tuesday on a proposal to add Wisconsin to a list of states calling for a balanced budget amendment to the U.S. Constitution. The Republican-backed proposal would bar the federal government from spending more than it takes in. Twenty-nine states have passed similar resolutions.

Supporters say a balanced budget amendment is necessary for the safety and stability of the United States.

Opponents say a balanced budget amendment would make it harder for the federal government to respond to economic downturns and natural disasters.

Some opponents also warn against a so-called “runaway convention” that would make unexpected changes to the U.S. Constitution.

The proposal is up for a committee vote.

Religious and environmental groups have sent a letter to the state schools superintendent candidates asking them to pledge the teaching of “climate literacy” in Wisconsin schools.

Fifteen groups are asking superintendent hopefuls Tony Evers and Lowell Holtz to ensure teachers are allowed to tell students the scientific consensus is that human-caused climate change is real.

One of the people who signed the letter, Dick Smith of Citizens’ Climate Lobby, said the head of the state Department of Public Instruction can help set educational policy and tone.

“Really, it’s an aspirational call,” Smith said. “We’re not trying to define what the standards should be. We’ll leave that to the educational experts. But we’d like to have the leadership leading.”

Two Democratic state lawmakers are introducing a bill that would require presidential candidates on the Wisconsin ballot to release their tax returns.

Under the measure from Green Bay state Sen. Dave Hansen and Milwaukee state Rep. David Crowley, all presidential and vice presidential candidates running in the primary or general election would submit their tax returns for the three most recent years to the Wisconsin Elections Commission. The commission would then be required to post the tax returns to its website within 48 hours.

The legislation comes after President Donald Trump broke with decades of tradition by refusing to release his tax returns during his White House campaign.

“We haven’t heard too much from our Republican colleagues on this,” Crowley said. “Yes, this is in response to a Republican, newly elected president, but I think that he’s set a precedent for us to say, ‘You know what, we need all the information that’s possible.'”

The lawmakers are circulating the bill for co-sponsorship with plans to introduce it to the Legislature by Tuesday, April 4.

German candymaker Haribo plans to build a new plant in Pleasant Prairie, bringing with it an estimated 400 jobs. Gov. Scott Walker announced the decision on March 23 at a state Capitol news conference flanked by local government leaders from Pleasant Prairie and Kenosha County, as well as business groups from southeast Wisconsin. Walker’s administration said the plant would cost an estimated $242 million to build.

The Wisconsin Economic Development Corporation said it would offer the company incentives to move, but WEDC wouldn’t say how much it was offering until the deal is finalized.